No matter how long one has lived or traveled in foreign countries, every so often a cultural experience will happen that re-awakens the magical impression that first created the desire to learn more about—even relocate to a particular destination. 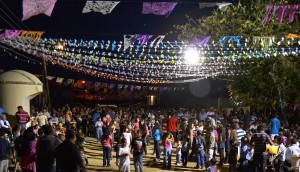 When it’s Mexico, there are many colorful festivities, large and small, throughout the year to keep our appreciation for this country impassioned.  One such event takes place on May 3 of each year. It’s called Día de la Santa Cruz (Day of the Holy Cross).  It is two days after Mexico’s Labor Day and is celebrated mostly by the construction workers, mainly bricklayers.

In reality, it is a neighborhood celebration attended by almost everyone within miles around.  It begins at the end of the work day with a Catholic mass service followed by a dinner and then live music until the wee hours. The evening is paid for by neighborhood donations throughout the year. 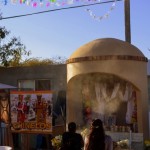 As in every local Mexican event, no matter how small or large, strangers (gringos included) are always welcome and even honored. In Puerto Peñasco, the largest May 3 celebration takes place in the Barrio Obrera, the neighborhood that runs along the old Cholla Road portion that has been paved. 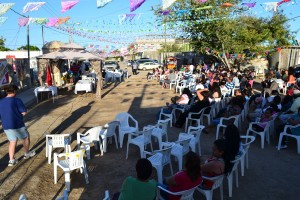 At first, it seemed like they had a lot of chairs lined up along the short dirt street with a band stage set up where it dead ends.  It seemed like a lot, but people continued to flow in until the number was over 500!  Most seemed to know each other or were introducing their families to their neighbors. 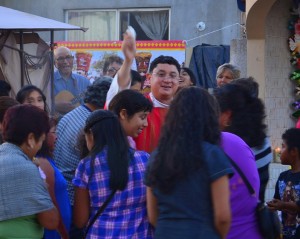 Mass was held by the parish’s new Priest, just ordained in March, Padre Eduardo Medina Chew.  He delivered a meaningful sermon followed by Holy Communion and finished by blessing the crowd with sprinkles of Holy Water. 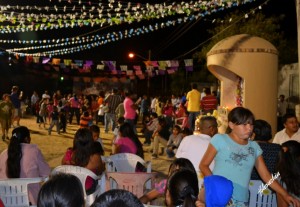 Recorded music began as a committee began serving plates, each with a portion of corn tortillas, machaca, arroz and frijoles. The kids started doing all the modern dances to the Mexican music while waiting for the band to start at 9:00PM.  Everyone seemed ready for a long night of camaraderie and celebration. 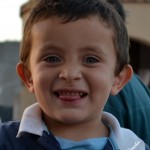 This marked the 14th consecutive year for this celebration.  What makes it so unique is that it is organized by 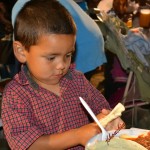 the common folk who live and work in the Barrio.  Pancho Belén has served as either 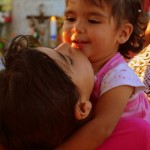 the main organizer or has overseen the details since the very beginning.  He himself works the Sandy Beach selling jewelry. His wife, Yolanda, is one of the two masseuses you see on the beach in front of the Sonoran Sea every day.

This event is pure Mexico that will take you back to some of those first impressions you had of this lovely country that draw visitors back so often, and so often draw them back to live.