Tourist Assistance Unit, as First Responders, Save Another Life in December and Much More

It has been less than two years since Mayor Kiko Munro inaugurated the unique Tourist Assistance Unit in Puerto Peñasco and their reputation for service to visitors has garnered accolades from both Mexican and American tourists who have benefitted from interaction with these courteous, bilingual agents.

It’s amazing how they seem to appear out of nowhere to assist tourists who find themselves in trouble for whatever reason. 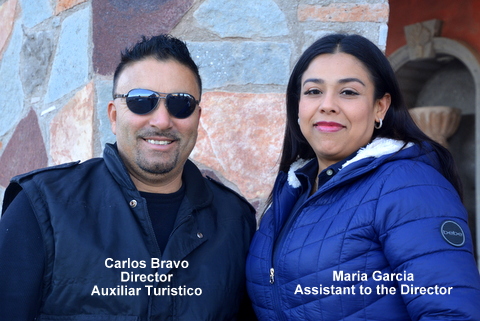 “My girlfriend and her daughter flipped their quad way off the road in that low desert area between the Sonoran Sea and town. One of those Tourist Assistance guys was there almost before the dust settled and lifted the quad back on its four wheels”, related Frank Nuñez, visiting from Phoenix, “the girls were looking all around and asked the guy how he got there so fast. He told them he saw what happened from the road above and headed straight to them. They weren’t hurt or anything so all is cool.”

The TAU agents receive training in various skills almost every week, which has accelerated their ability to provide quality assistance in an ever-growing range of services. In December alone, the unit attended joint training classes with the Puerto Peñasco Police in personal defense techniques and use of fire arms. Their training is ongoing and covers myriad aspects of tourist related skills, such as first aid, CPR, environmental protection and English classes. 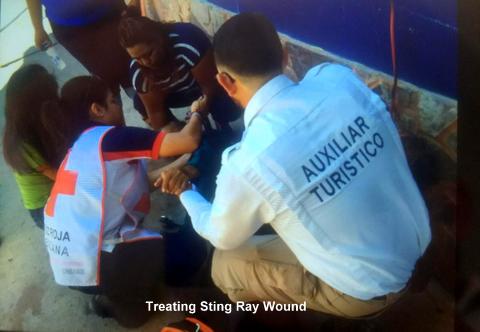 Shortly after his first term election, Mayor Kiko Munro demonstrated his understanding and foresight for the importance of the city’s preparedness to serve the imminent burst of tourism growth as the economy recovers and the popularity of Rocky Point beaches reach record levels as a result of aggressive promotions in the nearby U.S. and Mexican states.

His more obvious actions include the improvement of streets, installation of overhead street lights and street signs, and, of course, the inauguration and certification of the Tourist Assistance Unit, which is the first of its kind in the State of Sonora. According to state sources, the TAU may be the first, but will not remain the only tourism-specific security unit in Sonora or the country of Mexico.

With his second full term as Mayor underway, most agree that we can look forward to even more refined tourism services that will increase return visits by the many who enjoy the secure, friendly atmosphere of our little slice of paradise by the sea, lead by the skilled professional Tourist Assistance Unit.

Anticipating continued growth of TAU, the Mayor-appointed President of the Tourism Assistance Advisory Committee, Jim Ringquist, Director of Sales and Marketing for the Sonoran Resorts, is making space in his widely read monthly newsletter for a regular column dedicated to u

pdating his readership on current developments with the TAU as well as reports illustrating important visitor interactions by the TAU agents that result in the saving of a life and other critical first responder rescues.

If you’ve been involved in an emergency or other situation that involved the assistance of a TAU agent, we would love to hear your story. This is important as a means of supporting the continued funding of this needed organization. Please don’t hesitate to contact Jim at his email and or phone number listed in this newsletter. 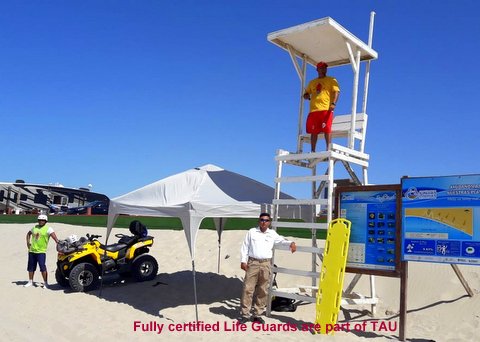 . Let TAU serve as a strong indicator that the city is aggressively preparing for this destiny.

Among a long list of incidental services provided by the TAU agents in the month of December, it is important to note that only last week two agents received an emergency radio call from a condo on Sandy Beach requesting urgent assistance and ambulance for an 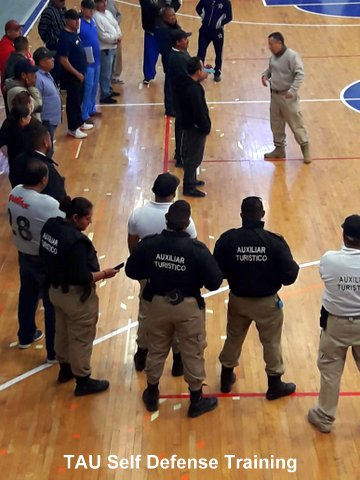 individual who was unconscious and had stopped breathing. The caller feared he might be dead. The TAU team arrived before the ambulance and used their skills to apply CPR to the victim until the ambulance arrived. By the time the paramedics arrived, the TAU agent had restored the victim’s breathing, saving his life. He was rushed to the San José clinic where a physician diagnosed the victim as suffering from an overdose of alcohol and drugs. He was discharged a few hours later in the care of family and friends.

In another incident around that time frame, an alert TAU agent sighted a suspicious looking individual on the beach and noticed the numbers on the side of his red ice chest that he recognized as the condo unit number of one of the beach front resorts. Upon inspecting the contents of the ice chest, the agent discovered several DVD’s and TV remotes. The thief was apprehended and turn over to the resort security team for further processing. This is why TAU personnel are welcomed along the beach on their daily patrols.

You will recognize TAU presence because they wear khaki pants and white shirts with “AUXILIAR TURISTICO” printed on the back. When you see one, thank him or her for their service. You will surely make their day!