In Part VII of our impact study we discussed concerns of the cruise lines with regard to the ability of destinations to cope with passenger growth—which seems to have taken a life of its own, in fact for several years now. Of course, that’s positive news for Puerto Peñasco as we fit right into the growth trends: that is, new destinations, new larger ship handling capabilities and favorable economic conditions for the cruise lines to restock, refuel, and repair. 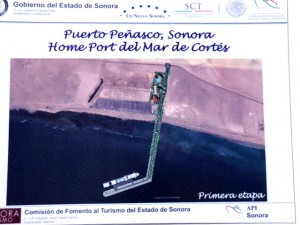 All our issues are in the now to be taken care of. Even as we’ve begun construction of the new pier, the cruise lines have let us know that our pier, while plenty long enough before, must reach further into the sea to accommodate the deeper hull requirements of larger, heavier ships.

These new dimensions are being redrawn even now and will be brought to the federal government for new budget considerations and approval.

In the meantime, mega cruise ships continue to stagger the imagination of the most experienced cruiser as tens of millions of dollars are being spent to build amenities of bewildering technological advances. For example, Royal Caribbean’s newest mega ship, Quantum of the Seas, while only the second largest ship at sea, will boast over 2,000 cabins (can’t call them cabins anymore!). Even the inside suites have virtual balconies that project high resolution images of the sea moving by at the exact same speed as the ship moves. And that’s just inside the suite. Still wondering why the industry is growing so steadily?

In the public areas of Quantum, already dazzling on most ships by any standard, you can sky dive—yep—sky dive into a vertical wind tunnel, sit at a bar that swings out over the sea for a 360 degree view and a near perfect 180 degree glimpse up and down toward the sea and sky.  Can it get any better? Yes, 90% of these high tech amenities are FREE. How about bandwidth availability? Through a partnership Royal Caribbean has their own satellite that provides more bandwidth than every other ocean going vessel in the world—combined! There is even a bar on board where passengers are served by robots. And this is just a small portion of the technologically advanced amenities aboard this one vessel, of which they have two more being built.

Our home port is coming together at its own pace and at the right time. Frankly, as frustrating as some of these delays are, each delay works in our favor in the odd way that allows us to catch another glimpse of what’s in store for the future of the cruise industry and to prepare for it. All while other cruise ports are having to redesign, rebuild and restart their efforts to prepare for the future of cruising technology.

In a meeting with Wendy Winzer, Administrative Director of the Home Port project last week, she let us know that the construction company was in full talks with the federal government about the details on the increased budget necessary to build their own large rocks to resume construction while plans are being drawn up to extend the pier to accommodate the changes necessary to safely dock the larger ships anticipated by the cruise lines.

As to when construction might resume, “It’s all up in the air at this point,” Wendy said, “but the good news is, what goes up must come down, right?”

As usual, we’ll keep you informed with any new information.