Potpourri Page—Short Shorts of All Sorts

Sometimes so much is going on in our little slice of paradise by the sea that we can’t address the many short subjects with proper attention in our blog. To handle the hodgepodge of dangling subject matter, we invented the Potpourri Page to appear on our blog site and in Jim’s monthly newsletter to cover those short subjects that deserve updates, follow-ups and reminders and keep you out of trouble, make you 46% smarter, and 11% more likely to lead the conversation in a social gathering. Read on…

It was the morning of July 3rd when a pregnant Olive Ridley sea turtle  followed natures calling onto Sandy Beach and dug a nest to a presumably safe depth to deposit some 84 eggs to be incubated and hatched around two months later.  The instinct of sea turtles is to return to same area where they were born to lay their eggs.  Even though Sandy Beach is not normally a nesting area, this mother-to-be had found it for her eggs to grow into embryos a safe distance under the sand and hatch in nature’s time. Even so,  Mexican Environmental Protection Agency Personnel were called in to cordon off and protect the area from beach traffic and animals.

Tragically, extreme summer heat beat continuously on the beach with little chance for the sand to cool in the evenings save a few moments of tide to soothingly soak into the nest for a few of the days following the mother’s nesting.  The result: by the second week of August total decimation of every egg in the nest was discovered.  Extreme temperatures are the reason this area is rarely selected for nesting so the unfortunate occurrence is not unusual when eggs are deposited here.  R.I.P.

Southside Jillz (Fun and Then Some Bar and Grill) Coming Soon!

Jill Mitchell herself confirmed the rumor that she’s about ready to open a new bar, this one on Calle 13 in the former Crocodiles building at the west end across from Peñasco del Sol Hotel. She plans to have us playing horse shoes, ping pong, darts, volley ball, pool among others…why? “Cuz that’s the way I like it, oh yea…” says the Jill! She plans to have it open by the end of October and promises to keep us all posted via Facebook. Good Luck, Jill!

It arrived in pieces—really, really big pieces—even the crane that put it together arrived in pieces—really, really big pieces. Assemblage started on a Monday (August 11) and that monster was twirling in the wind by Friday. Words can’t describe the sheer largeness of this project, especially when you consider how quickly it became a working machine that will generate enough electricity to power some  2,700 folks for the next 20 years or so. But, first they had to put it together and here’s a video by frequent visitor Eric Brown that will let you know what happens when one of those “what if” thoughts really happen…he just by chance was in the right place to help when a strong wind swept across the area just as the critical raising of the propellers was taking place. Click on this video and watch Eric save the day for these brave workers!

Knowing Tony Ballesteros, our resident photographer and creative craftsman, it was purely an act of compassion for those who suffer that caused him to give one of his handmade seashell crosses to a couple he had known for less than an hour so they could in turn give it to a dear friend of theirs in her final stages of cancer.  Here is a letter from that couple flowing with appreciation for his compassion. Nothing else need be said or written…

In June we spoke with you at the Mermaid Market.   My husband was purchasing some photos of yours for a co-worker who was in the hospital with Stage 4 cancer.   She ( Dee) and her husband had been to Rocky Point many times; with hopes of retiring there someday.   After sharing this information with you, you were gracious enough to give us a seashell cross to give her. 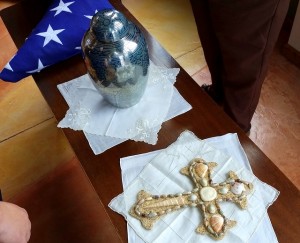 Dee passed away last Saturday..  Her funeral was today.

We wanted you to know that in speaking with the family, we realized just how much that cross meant to her and wanted to share with you. Both her husband and brother asked us to pass their thanks to you.

The cross was present at the services today next to her ashes. Her brother told us  as soon as we gave her the cross, Dee had requested it be placed above her bedroom doorway so that she could see it daily.   It brought her peace, and comfort. The pictures of Rocky Point we purchased from you, were placed in the hallway so she could see them from her bed.

Please know how much your kindness meant to so many of us.  It was an act that truly reflected the attitude of all of us who love Rocky Point so much.  Although Dee was not able to make the final journey to Mexico she wanted to make; she was given a piece of Rocky Point that will remain next to her now.

I have attached a picture from the service today.  Her urn, the flag, and the cross. Representing what meant the most to Dee.

Looking forward to seeing you soon,