As we continue through a year of Home Port Economic Impact studies as they relate to Puerto Peñasco, this is a good time to review some statistics that have been released over the period and, if covered, warrant reiterating to keep us 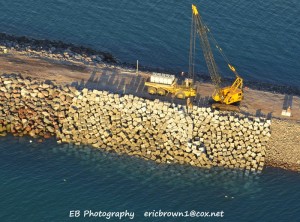 in tune with the sheer size of the industry that is about to take us under its wings of wondrous adventures and imagination. We speak of course of the cruise industry.

It is an industry that seems to have done everything right from the very beginning, even though it started without a plan other than to take 241 very deserving, and wealthy, passengers on an extended cruise of the Mediterranean back in 1891. This marked what is officially recognized as the inception of the cruise industry, an industry that continued to grow, contributing to world economies until 1970, the year the industry carried 500,000 passengers, literally slinging it into “Critical Mass”, when growth takes on a life of its own, and cruising has never looked back since.

In 2013 an estimated 21.3 million passengers embarked on cruises from 2000 cruise ports worldwide contributing $117 billion to the economy and supporting 891,000 jobs paying $38.5 billion in income around the world.

Even with only 30 of the world’s 2000 cruise ports, North America remains the dominant market with a global share of 55.5%. The U.S. truly drives the world’s cruise market, contributing $44.1 billion to the U.S. economy generating 363.133 US jobs paying wages of $18.3 billion. The cruise industry impacted the economies of all 50 US states in 2013. 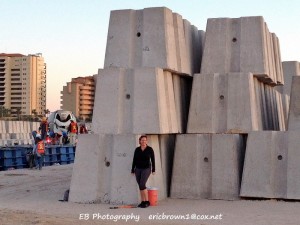 Considering the unstable world economy over the last few years, including in the US, these figures are nothing less than astonishing. And if these numbers aren’t enough to float your ship, consider that there are no less than 30 new cruise ships on firm order for delivery by 2020, 17 of which, worth nearly $12 billion, are scheduled for delivery by the end of 2016, that’s an investment of more than $250,000 per luxurious cabin!

With the industry’s fearless foray into spending without limit on developing high technology to bring more incredibly imaginative amenities, experiences and attractions on board these colossal vessels, the scenario only gets more exciting , as we’ve hinted at in previous articles, and will continue to cover in the future. 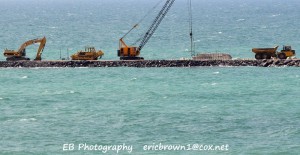 Every time we look towards the pier, it is exciting to see the equipment traversing territory from beach to sea. Our kind and knowledgeable guru, Wendy Winzer, Project Administrator, tells us that it may look like they are working the pier 24/7,  but the crews are actually working the concrete cube site 24 hours a day in two shifts. They are pouring 150 cubes per day using 200 small (one ton) molds and 58 big (10 ton) molds.

All the cubes so far are being placed to reinforce the existing part of the pier and no significant length has been added. The lighter colored cubes create an illusion that the pier is being extended.

Wendy was pleased, even excited to let us know that not only are the cubes fitting in as they had planned, but marine life is abundant, even during construction, and increasing with the change of the season around the pier. She said, “We get seals, turtles, dolphins, tons of different species of birds and ducks, and many schools of fish.” 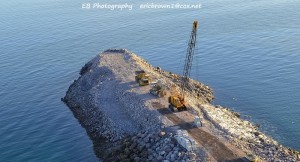 “The company is doing their best effort in every possible way to be on schedule and meet the intended goals. We do plan to increase the workforce and increase the equipment as needed as we continue pouring concrete cubes, placing them on the pier and dumping rock from the quarry.”

As these photos from Eric Brown so vividly display, watching this important project materialize is quite exciting!