In addition to two major local events taking place in Puerto Peñasco in May, which include the 2nd Annual Tequila Festival on Saturday May 4th and the Sonoran Resorts Las Vegas Night for the DIF Charity on Saturday May 25th, there are no less than seven other national holidays during the month.

May 1st is Día del Trabajo, or Labor Day, in modern times celebrated much like our Labor day, as a day of rest and spending time with the family, although it used to be a day of burning effigies of the politicians supporting deplorable working conditions who were defeated on two major dates that changed the welfare and rights of Mexican workers back in 1906 and 1907.

May 5th, Cinco de Mayo or Batalla de Puebla, a date perhaps more vigorously celebrated in the U.S. than in Mexico, with the possible exception of Mexico City. That’s mainly because in the U.S. it is erroneously marked as Mexican Independence Day, when, in fact, May 5th was the date in 1862 that Mexican forces defeated the French in the town of Puebla after a two year battle.

Other significant dates in May include Father Miguel Hidalgo’s birthday on the 8th; Mother’s Day on the 10th; Teachers Day on the 15th and Students Day on the 23rd. 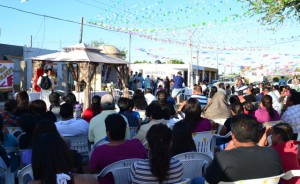 However, the headline story of today’s blog is about one of the most convivial, quaint 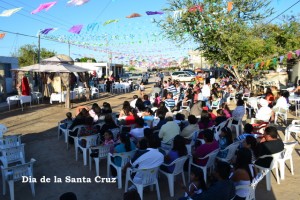 and colorful festivals in May. On May 3rd, two days after Labor Day, is “Día de la Santa Cruz” a special day with a history dating back to colonial times that has evolved over 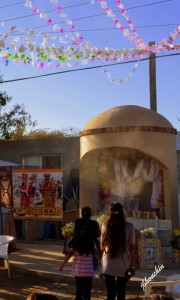 the centuries into a neighborhood celebration of the laborer, in fact, mainly the brick mason (referred to by many as the “Feast of Masons”), but generally all construction laborers are honored on this day in a series of special events that include the builders (owners) of all projects under construction hosting a lunch on site for the workers. On this day, crosses heavily adorned with flowers are hung outside homes throughout the neighborhoods as well as on the highest point of unfinished construction projects.

This tradition of crosses covered with flowers is believed to have been brought over from Spain by the conquistadors during the time when a church in Spain could not be blessed unless it contained a cross. Friars would fashion the first cross in a new mission out of flowers to expedite the blessing. Over the centuries the observance has evolved into adding a celebration of the workers who construct all types of 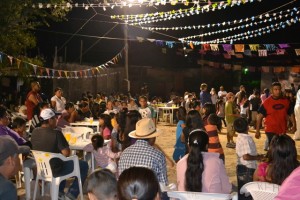 buildings, and especially the masons.

The hosted lunches are just the beginning of the festivities as beverages of various fermented ingredients flow freely as the laborers return to their homes and congregate with the entire neighborhood at a designated, decorated central community location for an evening that begins with a full mass followed by food, more beverages, live music and serious partying until the wee hours of the morning. 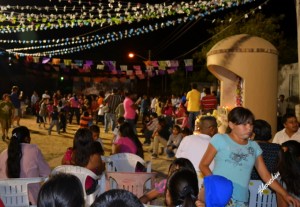 neighborhood (called barrios) who works with a committee to collect donations from community residents that pay for the party costs of food, non-alcoholic drinks for the kids, lights, decorations, stage, band, tables, chairs and fireworks.  The largest of the neighborhood celebrations in Puerto Peñasco takes place in Barrio Obrera which is the residential area that runs along the old Cholla Road that was paved a couple of years ago and is lined with souvenir shops. That section of road is affectionately referred to as Cholla Mall as well as other endearing names, and runs from where the dirt road that goes by the new convention center ends and up to the railroad tracks. 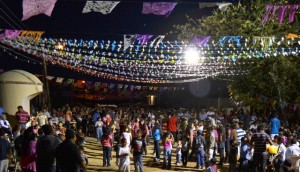 The barrio extends even further north and east of the road. The fiesta is held a short block north of the corner where the big pottery shop is located. Or just follow the crowd to get there.

This year the Fiesta de la Santa Cruz chairman for the Barrio Obrera celebration is Rito Toribio Dominguez,  leather craftsman and owner of one of the largest shops on the Cholla Mall street called “El Sol del Desierto” (The Desert Sun) who has been involved with these festivals since their beginning 15 years ago. We heard about this fiesta last May and showed up with no expectations one way or the other, and were completely blown away by the truly traditional Mexican atmosphere and hospitality shown by the over 500 friendly folks in attendance by the time we left which was before 11:00 o’clock and it seemed like the main crowd was just arriving!

No matter which neighborhood event you attend, be assured you’ll be welcomed and made to feel like a special guest of the barrio. Be prepared to enjoy an event that is pure Mexico—the essence of what brings us back to this colorful country again and again.