In addition to many American activities and events during the month of May that spark an influx of tourism into Rocky Point, May 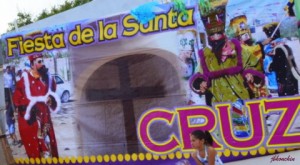 is also a month chock-a-bloc with no less than eight national Mexican holidays replete with traditional ceremonies and celebrations, many of which, even though national, will feature regional tradition in food, dance and merriment of the diverse cultures of this colorful folklore-filled nation.

The month breaks out of the gate with three days of celebrations that center around the hard working labor forces, beginning with Día del Trabajo (Labor Day) on May 1st, celebrated in modern times much like our First Monday in September Labor Day, except we pin our holiday to an extended weekend and in Mexico it is tied to a date, which this year falls on a Thursday.

Two days after Labor Day is Día de la Santa Cruz  (Day of the Holy Cross, and what this blog is all about). Wait a minute, didn’t we 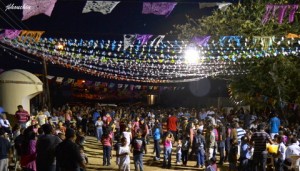 just say that May opens with three days of celebrations? As it happens, Día de la Santa Cruz, although its date is May 3rd, really starts on May 2nd, and the parties are even bigger when May 3rd lands on Saturday or Sunday.  Why? This is one of those national holidays with a history dating back to colonial days when construction workers, mainly masons, were honored (by some, still referred to as “Feast of the Masons”), but now days it includes all workers.

In fact when it falls during the week, this holiday is recognized by project managers who host a special luncheon for their workers and hang a decorated cross at the highest reachable point on the edifice being built. Spanish conquistadors brought the tradition from their home country where a church could not be blessed unless it contained a cross. Friars would fashion the first cross in a new mission out of flowers to expedite the blessing. 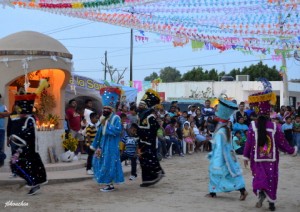 Over the centuries, on this Día de la Santa Cruz, residential neighborhoods began adorning their homes with crosses decorated with flowers and lace. Partly as a result, neighborhoods (barrios) began to gather in the evening to celebrate their workers no matter what line of work, beginning with a mass, then food, music and colorful decorations.  So, when this holiday falls on a weekend the celebration begins the evening before since the workers don’t have to work the next day and the party essentially goes non-stop until Sunday dawns.

Since many neighborhoods in Puerto Peñasco are made up of folks who have relocated here from the same home states around the country, you  get a party loaded with folklore from the region whence the residents relocated.

The largest, longest running (16 consecutive years)—and, arguably, the most fun—Día de la Santa Cruz celebration here in Puerto Peñasco is the one held on the next street north behind the Fifth Avenue shops, also known as the Cholla Mall shops, and other endearing names, called Barrio or Colonia Obrera. Their festivity attracts 300 to 500 attendees each of the two nights from all over the city because it’s so popular. 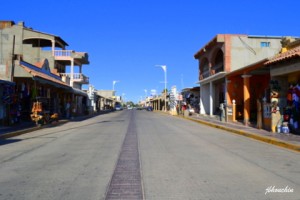 You may know this street of souvenir shops  even if you can’t place it in your mind right now. It’s the old road to Cholla Bay that  the city  paved for the length of the shops only about 3 or 4 years ago. Then the city built the new convention center on the dirt road connecting the street to the new road to the condos on Sandy Beach and to Cholla Bay. That road is now paved as well and has benefitted the shop owners significantly.

If you’ve ever wanted to spend an evening in a true Mexican family atmosphere with firsthand experience of their customs and culture, this is the perfect activity for you. Here’s just a few facts about the people hosting this Friday and Saturday night (as they have for the last 16 years).  Over half the shops on the Cholla Mall are owned by people originally from the state of 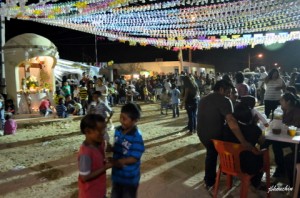 Guerrero (about 200 folks) and about half of them are Aztec (Nauhuatl) descendants, many from a little mountain town called Tlamacazapa, where the highest quality woven baskets are still handmade along with many of the items you see in the shops and on the beach such as bead necklaces, bracelets and necklaces made from stones found in the mountains of Guerrero.

Also from Guerrero are the artisans who weave  your name into  those tiny beaded bracelets as well as those who write your name on a grain of rice. Of the approximately 800 vendors who walk the beaches of our little slice of paradise by the sea , about 200 are from Guerrero and many of those from Tlamacazapa. 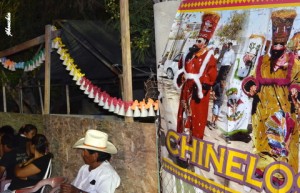 because we are their largest market, they also love the interaction, openness and friendliness of Americans. That’s why you will feel very welcome when you come to the events this weekend. Don’t be surprised if their attempt to just make you feel at home will have you feeling like a VIP.

Unless you are going mainly for the outdoor mass, which will only be on Saturday at 4:00pm this year, you will want to choose the Friday night function known as 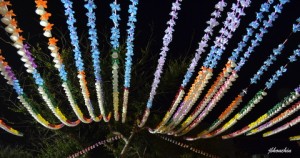 La Vispera (The Eve) because that ’s the night two groups of folkloric dancers typical of Guerrero will entertain. The party gets started about 5:00PM with the serving of Guerrero Red Mole served with rice and tortillas. Mole is made with “Red Chiles California” grown in Guerrero, and chicken. Soon after, the “Danza de los Chinelos” folkloric group make their annual appearance. They are followed by Los Chivos making their first appearance at the function. Both groups and their dances are examples of Guerrero folklore.  Of course recorded music is going throughout the night and everyone is encouraged to dance. If you’re too shy to dance, you’re encouraged to drink enough fermented spirits to drown your inhibitions.

How does the barrio pay for an event for such a large group of people?  About 40 beach vendors from the barrio pitch in throughout the year so the food and decorations can be provided for free to all who come. 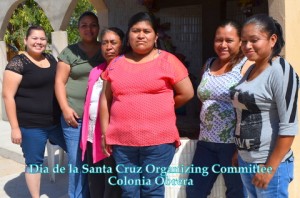 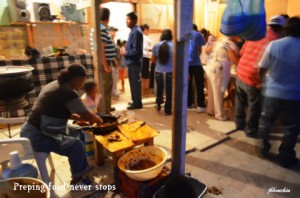 6:30 in the morning each day. Fireworks announce the commencement of food preparation and decorating.

This coming weekend is a great time to get a group of friends together to show up and get to know some very nice, hospitable local Mexican families who you  may even see on the beach at another time. Don’t be surprised if they remember you were at the barrio for Día de la Santa Cruz!