Dr. Jesús González-Gaytán came to Puerto Peñasco about seven years ago on a mission—to build a full service medical center that 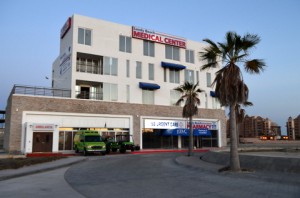 could handle the emerging medical tourism market in this booming resort destination. The spiraling momentum of investments and building in this heretofore undiscovered paradise seemed unstoppable. It may have survived any kind of economic down turn except for one that involved a bubble that burst world-wide , which is exactly what happened.

Having spent more than two years building his medical center, by 2009, the good Doctor González found himself in the same place as all the builders and property owners in Rocky Point. He stood at the entrance of his monument to good intentions—Sandy Beach Medical Center—confident that he could continue to provide the services through this facility, which he had designed, built and equipped to meet, even exceed the high standards required by tourists as well as the expats living here. His center included ultra clean emergency care facilities, fully equipped patient examination rooms, the most modern equipment, highly qualified medical staff, new emergency rescue vehicles, a 24 hour pharmacy and general store. Dr. Gonzalez had built a growing English speaking patient base sufficient to keep his medical center actively involved in fulfilling medical tourism needs.

But the Sandy Beach Medical Center was only part of the Doctor’s master plan for Puerto Peñasco. Dr. González had come to Rocky Point from one of the largest and most successful medical tourism health care organizations in the country,  AMERIMED Hospitals. Dr. González could clearly see that the destiny of Puerto Peñasco is to become the throttle of tourism growth for the entire country as a dominant world class destination. Doctor’s master plan envisioned the medical center  growing into a joint venture with AMERIMED Hospital.

After opening his Sandy Beach Medical Center, he spent the next four years convincing them without a doubt that Puerto Peñasco should be the location of their fifth medical tourism hospital. At the end of 2013, after several visits by AMERIMED officials, including their CEO, Lic. Espino, Dr. Gonzalez had accomplished his mission and signed the final joint venture agreement papers in March of 2014, which named Dr. González as Medical Director of the new Hospital AMERIMED Puerto Peñasco. 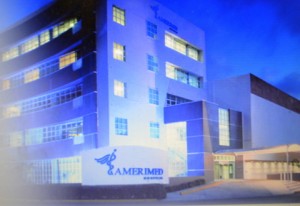 The architectural plans for a $500,000 USD expansion of the Center were already completed. In less than a month after the agreement was finalized, an AMERIMED hospital administrator, Guadalupe Miranda, has already relocated to Puerto Peñasco. An intensive hiring campaign has netted six of the eight medical staff needed to fill first shift requirements. Those include Nurse, Alonso Gaona; X-ray technician, Pablo Meza, Lab Technicians, Gaby Villegas and Judith Acevedo; Maintenance Technician, Andres Medina; and Cashier/Receptionist, Daniel Bracamontez. Still needed to complete the first shift are two Paramedics. Once these two final positions are filled, hiring will begin for the second shift until the hospital can operate 24/7. They are also in search of bilingual physicians.

The expansion will increase the number of emergency rooms to five; add a surgical unit and intensive care unit; install an elevator up to 10 patient rooms to be built upstairs.

AMERIMED plans to bring another $1 million in equipment to the expansion, including Cat-scan and latest X-ray equipment, plus all state of the art equipment to furnish the surgical and ICU units. 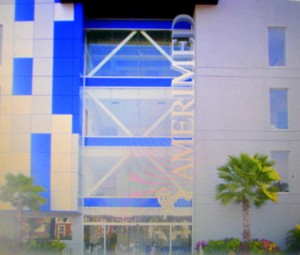 Dr. González was personally familiar with the dedication of this organization to medical tourism and their ability to provide the quality of service required to attend to that patient segment.

Perhaps the most important advantage AMERIMED brings to the table for the U.S. tourists and residents of Puerto Peñasco is their contracted affiliations with so many international healthcare providers and insurance companies, including such majors as the

Veterans’ Administration, TriCare, Bluecard Blueshield, AETNA, MetLife and over 20 others. This is not only important and exciting for the many veterans who reside here, but should be equally so for any visitor and resident alike. To get a handle on what AMERIMED is bringing to Puerto Peñasco, visit their web site at: www.amerimed.com.mx. You’ll see photos of their hospitals in each of the major tourist destinations they serve and details about the medical specialties that continue to attract affiliations with health insurance companies around the world.  The site is very easy to navigate as well. It will open in Spanish; just look to the upper right of the landing page and click “English” which flips the entire web site into English.

If you’ve never been to Sandy Beach Medical Center and would like to make an appointment with Dr. Gonzalez for a medical reason, you may call locally: 388-7676. You can email them at sbmedcenter1@yahoo.com.

Stay tuned to this Sonoran Resorts blog for updates on the progress of this important addition to our growing community!