In last month’s Part III of our ongoing series about the impact the home port will have on Puerto Peñasco, we discussed how we can benefit from the extensive knowledge base developed  by the cruise industry covering every aspect of what pleased their 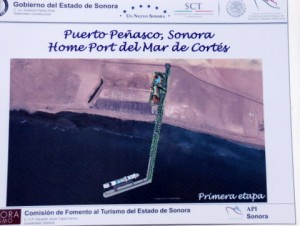 passengers the most during their time on as well as off the ship while they cruised, during port calls and especially before and after the cruise.

As a bottom line we need go no further than the simple philosophy of the cruise lines that has created the most satisfied clientele among all segments of the tourism industry: A spoiled passenger is a satisfied passenger, which makes for a repeat passenger.  Each month we’ll extrapolate from this simple philosophy what the cruise lines do to make absolutely certain that their passengers are spoiled and how a destination like Puerto Peñasco can take advantage of this proven method of building repeat business.

It may sound over-simplified to say that a highly developed infrastructure includes much more than building a hassle-free ingress and egress for the cruise ship pier. That is until you read what makes up an infrastructure capable of spoiling everyone who enters 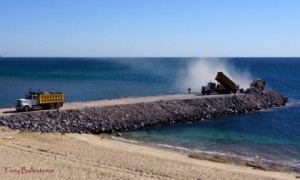 our little slice of paradise by the sea (port). It’s a fact that the kind of infrastructure needed to spoil (not just satisfy) visitors involves constantly looking at every structure, business and person with which or with whom a visitor comes in contact from arrival to departure with the thought of how that experience could be improved.  Sound a little eccentric? How about after you consider that cruise lines have been doing this with astonishing success since the 1970’s and credit such detailed diligence for the 2,100% growth from 500,000 passengers then to an estimated 21.3 million last year!

In future editions of our Home Port Impact studies, we’ll continue to analyze the cruise lines successful take on infrastructure and how we can integrate their philosophy and actions into our own preparation for serving the cruise market to ensure we get them back for their next land vacation.

To get the latest on what’s happening with the construction of our home port, let’s take a walk with Administrative Director, Wendy Winzer…

It seems that on most major projects the size of our Cruise Ship Home Port, equally complex challenges should be expected. In the case of this phase in the construction process, the challenges are raising their prickly little heads, although with no lasting negative effects other than causing delays in an otherwise tight project completion schedule.

The closer one is to the daily issues of a multi-level project of this size, especially with the number of separate job contracts involving the government—and the government’s money, the easier it is to not be surprised or alarmed at chinks in the system status quo when they occur.  The Puerto Peñasco Home Port project, as large as it is, doesn’t escape vulnerability to human interaction. 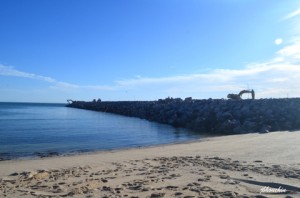 challenges described above.  Construction was halted due to the depleted stock of rocks and delayed issue of the federal permit to purchase and transport

explosives required to access more of said rocks from Black Mountain.  At the time we published, the permit had issued and explosives were purchased and waiting for the required military personnel to escort the delivery to the Black Mountain area.

The second part of that saga involved a conflict caused by one of the truckers’ unions jockeying for position to take over the other truckers’ contract even though two contracts were mandated by the Sonoran state government to insure enough trucks and drivers would be available at all times.  Local administrators—and all the way to the governor’s office believed this conflict would dissipate upon arrival of the explosives .

Here’s a summary of what has taken place since our last publication:

The explosives arrived and were set into the predrilled placements. The blasting occurred on April 7th.  The goal was to blast 40-50,000 cubic meters of rocks from which three sizes of stone required could be delivered and placed in the order needed to build a stable jetty that becomes even stronger with age.

It was quite a dynamite cocktail made of 60 tons of “high explosive” and 240 tons of  “explosive agent.”  Watch the effect of that much dynamite in the video.

Even though the blast produced an estimated 40,000 cubic meters of rock, it’s hard to believe but another challenge raised its prickly little head when the construction general contractors discovered that the rocks from the blast were smaller than the specs for the smallest rocks needed. 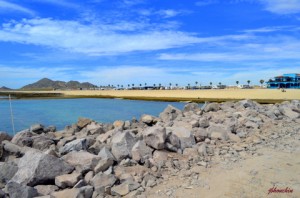 Back to the drawing board went the analysts to determine what went wrong and how to fix it for the next blasting scheduled for May 8th.

While these events haven’t crashed the proverbial apple cart, they have upset it somewhat according to Wendy. She said that all parties are in Hermosillo currently negotiating  with the remaining construction companies, who, he adds, are large enough to provide all the equipment and manpower to keep the project on schedule. She hopes to bring everything together in May.

As always, we are committed to keeping you up to date on all home port developments.