The Santa Claus Club: Where Santa Comes to Town—Year Around!

What a pleasant trip it is to get to know this guy named John C. Fowler III who, 31 years ago helped a friend throw a children’s 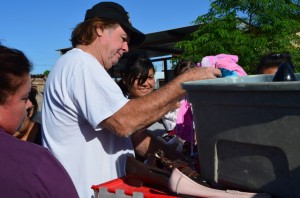 Christmas party at JJ’s Cantina in Cholla Bay which he co-owns with partner Joe Anacleto.  His friend, Agustín León, had come to John with an idea to have a party for the local kids from Cholla Bay on Christmas Day.

John remembers, “I gave him some money to buy candy and cookies and he was to go around and tell the children to be there for the party. My job was to provide hot dogs, chips, soda and children’s movies at JJ’s.”

“The first year there was 40 children in attendance and the rest is history”, added John.

Since that first party of 40 local kids, the Santa Claus Club (SCC) has been providing 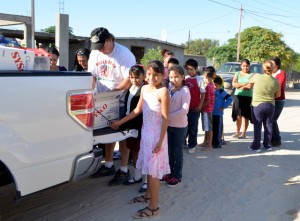 food and clothing, toys and bicycles, school supplies and household items to the needy families of Puerto Peñasco.  For the first 24 years, this was accomplished on Christmas Day at the annual party.

In 2007 the format was changed to a year around program. SCC now provides their community donation services right to the needy neighborhoods (barrios) on a weekly basis. “It…gives us a better understanding of the needs of the families we are trying to help”, explains John. 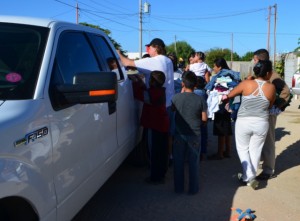 Did that work? John keeps a record and sends a simple but thorough summary of what was distributed each week, and keeps a running total as well. The stats from 2007 through the third quarter of 2013 show that 6117 food bags totaling 248,010 pounds; 2,791 bicycles, 32,059 toys, gifts and school supplies, and 99,645 pounds of clothes have been distributed to needy families by the Santa Claus Club.

John adds, “Besides the items we keep totals on, we have passed out thousand[s] of pairs of shoes, blankets, towels and sheets. We have 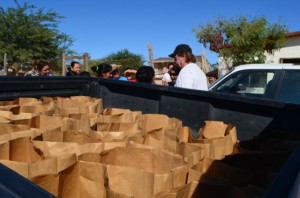 Obviously, the SCC works year around collecting items for delivery into the barrios and if you have anything to donate, it can be dropped off at the Baja Hotel and Cantina 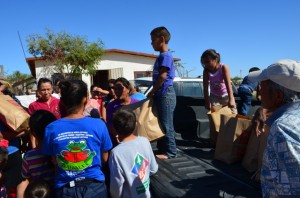 in Puerto Peñasco or at JJ’s Cantina in Cholla Bay.

In addition to the weekly volunteer efforts that, by the way, are carried out mostly in John’s big ol’ truck and as many volunteers as he can muster, there are more than a handful of fundraisers that take place several times a year. Many have become annual institutions, like the semi-annual “One Club Golf Tournament” at JJ’s Cantina; the Chili Cook-offs at Playa Bonita and JJ’s Cantina; and the Baja Cantina sponsored “Over the Line Softball Tournament” held on Sandy Beach. There are garage sales and auctions during the year as well. All are a lot of fun, and everything goes 100% to the needy families and organizations of Puerto Peñasco.

Here’s three good reasons to spend some time in Cholla Bay over Thanksgiving and help some needy folks at the same time: 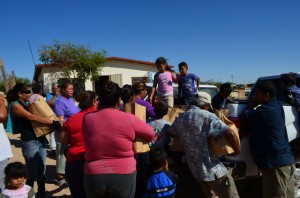 If you’re an Over the Line Softball aficionado, mark these dates in your calendar as well: 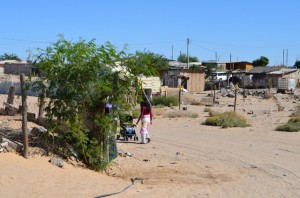 Contact John by email at santaclausclub@hotmail.com; visit the web site at 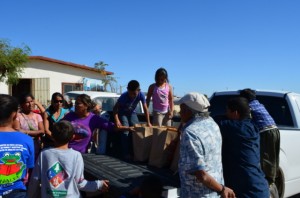 www.santaclausclub.org and find even more information on Facebook under John C. Fowler III. To learn more and inquire about being a part of the family of good folks trying to make a difference please call 602-840-1528.

Just as JJ’s Cantina has been an icon for tourism for three decades, so has the Santa Claus Club been a living legacy for the needy of our community over those three decades.