It’s that time of year again! In fact, it’s the favorite time of year for thousands of motorcycle clubs and enthusiasts from all around the U.S. and Mexico. 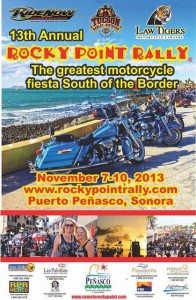 It’s the time of year they all converge on our little slice of paradise by the Sea of Cortez for 3 nights and 4 days of camaraderie, consumption and custom bike show and tell. It’s a festive atmosphere amid continuous well-organized and fun entertainment to keep everyone busy deciding which event (read: party) or activity (like road trips to nearby scenic sites; mystery poker run; raffles, bike washes, wet t-shirt contests, and so much more…) to attend.  The saving grace is that there are no wrong decisions for these fun-loving amiable aficionados of two-wheel transportation. 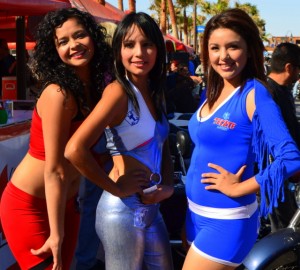 Steeped in 12 years of tradition that began in March of 2001 with a simple gesture by local hotelier (Playa Bonita Hotel owner), Harley enthusiast and passionate promoter of Puerto Peñasco, Oscar Palacio who first invited a couple of Mexican bike clubs from Mexicali and San Luis to rally for a weekend in Rocky Point. Over 80 bikers showed up and had a ball!

Oscar and his tourism promotion friends quickly saw the draw this sea side community could have on bike enthusiasts from all over. They hastily moved to invite more clubs for a second event in November of 2001 that became the first Rocky Point Bikers Rally with 380 in attendance. It has grown exponentially each year with crowds during the couple of years before the world economic crisis estimated at upwards of 8-10 thousand bikers peacefully blessing Rocky Point with their non-stop party spirit, their contribution to about every nook and cranny of the local economy—this in addition to raising large sums of money for numerous local charities as well as their insistence on bringing toys for the needy kids, and spreading the parade route with candy and little gift items for the kids during the much anticipated motorcycle show and parade through town.

Oscar Palacio, who in every other aspect of the success of his original idea is very humble, but his pride bubbles just a bit when he relates the fact that 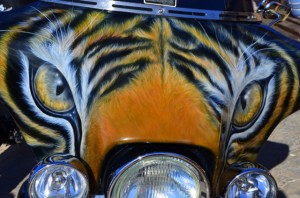 these rallies have raised over $200,000 dollars for local charities such as the all-volunteer fire department, Red Cross, La Montaña School for children with special needs, Cancer Center for Women, the Catholic Home for the Elderly (Asilo de Ancianos) and DIF programs in Puerto Peñasco and Sonoyta. DIF is an important state sponsored social assistance program that provides food, medical services, mental health programs, rehabilitation programs for families and shelter for disadvantaged, abused and abandoned children. 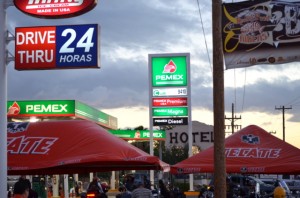 Most of those funds have come from pure generosity on the part of our rallying bikers who willingly pay the $10 registration fee knowing it all goes to these charities.  The great percentage of the bikers also participates in another charity event, the “Poker Run”, on their way down to the rally. Since one road leads everybody from Why, AZ to Rocky Point, it’s easy to organize with some of the more than willing landmark stops along the way. This year’s game is “Mystery Poker”.  Everybody’s going to want to do this because no one will know the value of their hand until they turn it in, that’s the mystery; anybody can win.

Get all the details on the “Mystery Poker Run” and the entire event calendar in an easily readable itinerary format at www.rockypointrally.com . Just click on “events”. You’ll also probably want to click on “maps” to see the complete route for the traditional Saturday parade that will begin at the Black Dog on Fremont and wind up at the Baja Cantina and Hotel in El Mirador with two great bands waiting to start the “Parade Fiesta”.  This is such a complete web site for the Rally you can use it as your “go to” guide until you register at the Barclin Pemex-Circle K, the first gas station you see as you near Puerto Peñasco.  By the way, there’s also a facebook page at: Rocky Point Rally.com.

Since rockypointrally.com is such a great site, we can concentrate on some other important information to help you enjoy your visit during the Rally, whether you’re riding a bike or not.

It’s important to note that you do not have to be rolling in on your Harley to take part in this gala. Anyone can register at the Barclin Pemex-Circle K. 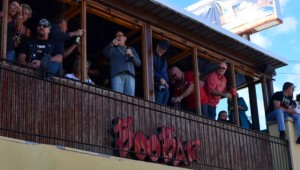 When you pay the $10 donation to register, you’ll get a wrist-band that shows you supported the many charities listed above, as well as your Rally registration pin. You’ll also automatically be put in a drawing for a free condominium stay for next year’s Rally.  You can participate in the poker runs, trips, boat rides, and the concerts, which you will not want to miss this year.

Concerts are special this year 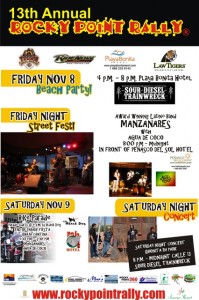 On Friday from 4 p.m. until 8 p.m. the annual “Fiesta on the Beach” where the rock rolls and tequila flows on Sandy Beach in front of the Playa Bonita Hotel, where it all started! This year you can dance or just listen to some great original country (as well as popular covers) by Sour Diesel Train Wreck who does their country with a lot of soul.

Then, just up the beach at the end of famous Calle 13, in front of the Peñasco Del Sol Hotel begins the equally traditional “Street Fest” with two fantastic bands that will entertain until around midnight.  If you’re a regular, this “Street Fest” is a prelude to the Calle 13 Fiesta which was modified a bit because the improvements to Calle 13 are restricting traffic somewhat. Motorcycles of course will have access all along Calle 13. The biggest change is the location of the bands to accommodate the crowd. 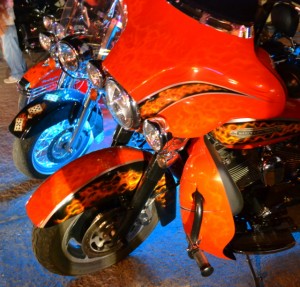 One of the bands appearing for the Street Fest is our own local “Agua de Coco” one of the most all-around bands you’ll hear anywhere. They play anything from reggae to rock and country to jazz—and they do it well. The other band appearing Friday night is “Manzanares”  an incredibly talented ensemble of creative musicians who play in a space all their own and with such precision you’ll be compelled to move with every beat of their rhythm, which is rich and varied but Latin focused with a lot of percussion, bass and modern flamenco licks.  The greatest news about all three of these bands is that we get to hear them again on Saturday. Agua de Coco and Manzanares will appear at the Baja Cantina and Hotel “Parade Fiesta” at the end of the parade.  Sour Diesel Trainwreck will commandeer the Bonita RV Park that is off Calle 13 for the big Saturday night Tecate/XX final concert.  There’s no way you’ll have enough of any of these three unique groups in just one night.

No matter what revs your engine, there’ll be plenty of it all over town and more than enough to go around! Have fun! Everyone else will be!