The plight of the Vaquita Marina Porpoise is Serious and Complex

It’s almost as if nature set them up for a limited existence on earth.  Although their ancestors have been around for a couple of million years, the tiny (in comparison) Vaquita (Phocoena sinus) porpoise lives in a very small area covering just 4,000 square kilometers of the 177,000 sq. km. Sea of Cortez.  The area they live in just happens to be the very northern most portion of the Sea of Cortez beginning approximately at Puerto Peñasco and north  where it is the narrowest, shallowest and very heavily fished by small fisheries made up of family fishermen who’ve lived off this part of the sea for generations.

One of the complexities, in fact, the most serious of all that works against the continued existence of the Vaquita, is that these fishermen use, and always have used, gillnets for dragging and catching shrimp as well as other edible bycatch.  The use of gillnets contributed greatly to the near extinction of the Totoaba, a fish that is now illegal to catch, but is still caught up in gillnets frequently.  However, unlike the Vaquita, a gill-less air breathing mammal, the Totoaba can live until it is released after being discovered when the gillnet is retrieved. The poor little Vaquita on the other hand gets caught and cannot surface to breath and literally drowns while tangled in the net. It takes little imagination to visualize the horror of a death such as is suffered by these beautiful, shy creatures. 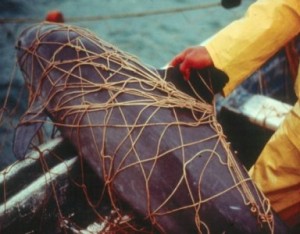 As if their limited territorial living area and the constant threat of getting caught up in a gillnet, which is probably why they are known to have an aversion to boats and are rarely ever seen, is not enough, there are other evolutionary dangers taking place that don’t look good for the future of the Vaquita.

The very existence of the Vaquita has only been known by the scientific community since 1958. An organized, focused study to confirm their continued existence didn’t take place until 1985, and an estimate of their abundance didn’t take place until 1997 when their population was estimated to be approximately 567. This number was a shocking discovery to say the least. Recommendations were strong and immediate that conservation efforts begin, starting with placing the Vaquita near the top of the endangered species list.

By the time the species studies were completed it was determined that the Vaquita qualified as an EDGE Species, meaning “Evolutionary Distinct, Globally Endangered”.  This means the Vaquita is the only species within the cetacean order remaining on its branch of the tree of life placing it as a top priority among cetacean order (whales, dolphins, porpoises) conservation campaigns. In fact, they were second only to the Baiji porpoise of the Chinese Yangtze River on the priority list. Since then, sadly, the Baiji species of porpoise has been declared functionally extinct and now the Vaquita occupies the number one position among cetaceans on the EDGE endangered list. The Vaquita is also accepted by the scientific community as the rarest and most endangered of all marine mammals.

Hopefully, their position on the tree of life as stated above will separate their importance as an endangered species from the many other animals on our planet and garner more awareness and activity from the governments of all countries thus expediting conservation efforts. It is a fact that the clock is ticking on the survival of the Vaquita. 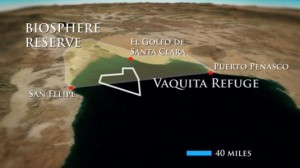 The rest of the story on the Vaquita population is that even though there were an estimated 567 existing in the 1997 study, a more recent study just five years ago, in 2007, estimated there were less than 200.  Since then several concerned scientific surveys have taken place and population estimates range from 150 to 245, either of which represent an alarmingly low number where survival of the species is concerned. During the Fourth Meeting of the International Committee for the Recovery of the Vaquita (CIRVA) held in February of 2012 it was reported that a minimum of 50 Vaquita would be necessary to have any chance of the species continuing.

Mathematics of survival is not working in their favor either. The Vaquita give birth only every two years. Even with the limited efforts made so far to reduce fishing by gillnets, an estimated 40 to 84 Vaquita are killed by them every year. Even with the higher population estimate of 245 and the lower estimated annual gillnet deaths of 40, it doesn’t take a scientist to understand that in order to save this species massive immediate action is in order to change the methods of fishing in the northern Sea of Cortez.

Can we save the Vaquita? According to the Viva Vaquita Organization and web site, we can. But we only have about two years to instill in the governing bodies the need for massive immediate action.  For more information about this beautiful animal and how you can help spread the word and therefore help save the Vaquita, visit the Viva Vaquita web site and some of the others listed below:

Thanks to Whale Watchers for the two photos and to Brett Jarrett for the drawing.

We close with a great thought from the Viva Vaquita web site: