The Friendly Dolphin is More Than a Great Restaurant, Much More! 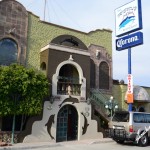 It might be an understatement to say The Friendly Dolphin is arguably the most recommended eating establishment in all of Rocky Point. Nor would it be a stretch to say that most who experience this venue for the first time do so accompanied by, or at the recommendation of friends or family. 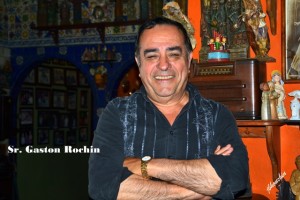 The reason that The Friendly Dolphin is so often and highly recommended becomes apparent with one’s first step through the brightly hand-painted entrance doors into a fantasy-like manifestation of the world cultures that have shaped history as it relates to Mexico—manifested by virtue of the carefully arranged displays of historically significant relics that cover virtually every square meter of this six room two story museum with perfectly prepared food and excellent service in an absorbing atmosphere of color and authenticity, happy, energetic staff and iconic and gregarious owner, Gaston (pronounced “Gas-TONE”) Rochín always there to greet every visitor. 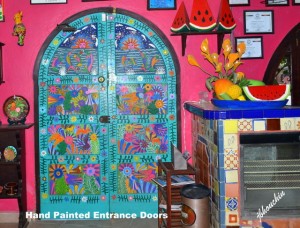 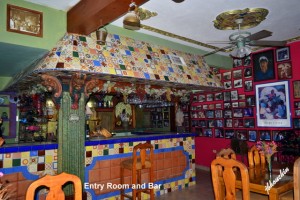 A native of Culiacan, the capital of Sinaloa, Gaston earned his Degree in Social Sciences from the University of Sinaloa and soon became Chief of Social Action for the municipality of Culiacan. He served in that capacity through four Governors—a political feat in its own right! Gaston’s entrepreneurial spirit had him start a refresquería to bring additional income into the family for most of that time.

He discovered Puerto Peñasco in his mid twenties, falling in love with the mesmerizing beauty and peaceful atmosphere of this unique beach town. He continued visiting annually for about eight years, with each visit creating a growing sense of urgency in him that brought the feeling that he was going to miss the growth of a truly great destination.  He decided he wanted to be a part of the growth he just knew was going to happen. 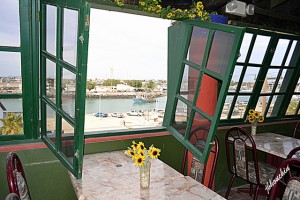 Adding to his final decision to make this radical move was little known to his fellow workers or his family due to the outward appearance of security that his job offered.  But inside, every six years during election time, Gaston suffered intense stress over 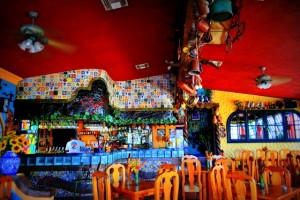 what might happen, knowing fully the insecurity of every political position after the elections.  Having survived four episodes of this drama, Gaston made the decision to leave and build a more secure future for him and his family.  He had complete confidence in his ability to build a restaurant because he was great cook, a student of the culinary arts, he loved people and meeting new friends, he was an experienced administrator, and he had the support of his family to make the move. 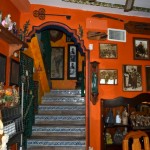 Gaston’s boss in Culiacan naturally thought he was crazy for leaving his job; so much so, that at first he turned down Gaston’s request to leave. After Gaston told his boss that his family was already relocated to Puerto Peñasco, his boss relented when Gaston agreed to train a replacement before he left. 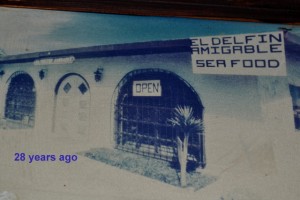 His wife’s uncle had a small building that had been a restaurant near the old port. In fact, it is the original building from which Gaston has expanded his restaurant so many times since. He even thought the original name would sound good when translated to English: El Delfín Amigable in English would be The Friendly Dolphin.  Now, 28 years later this name has reached icon status along with its owner, Mr. Gaston Rochín. 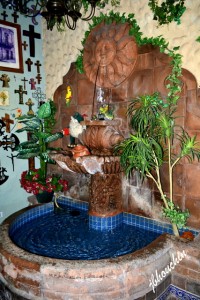 From the beginning Gaston set his five core principals of a successful restaurant and has stuck to them religiously:

His adherence to these core principals has created a consistency in each that are surely the underlying reasons for his success over the years. 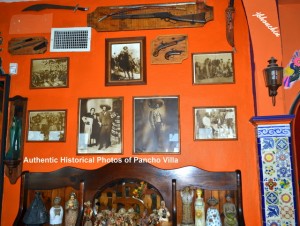 The fact that the restaurant is a museum in itself with so much to see and appreciate, comes from Gaston’s interest in history. He actually taught history for a high school here in Rocky Point for one year.  What he has done with the restaurant/museum alone is enough to bring clients back time and time again with new friends and visiting families.

Then again, one could argue that the food is what makes the return trip so worthwhile because the menu is made up of Gaston’s own recipes and he has four chefs who specialize in at least two of each main dish ingredients: Seafood, Mexican Food, and 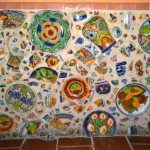 Chicken, for each of which he has several uniquely creative recipes known only by himself and the preparing chefs.  If truth be told, it’s the great combination of food and atmosphere that has brought The Friendly Dolphin to legendary status in Rocky Point.

As for the museum aspect of this truly one-of-a-kind restaurant, we’ll let the photos do the talking, until your own eyes can witness the real things.  So, suffice it to say that you need not wait for any sequel and should, on your very next visit, go to see this manifestation of the colorful history, culture and architecture of Mexico in photos and artifacts which have been written up in newspaper articles from as far away as Washington D.C. (The Washington Post), Canada, and beyond; and admired in person by movie stars, sports legends, governors and celebrities of all types from around the world over the years.

While the Malecon was under construction, Gaston closed the restaurant but is now open every day but Tuesdays.  He will begin opening on Tuesday as soon as the season begins, however.  In case you don’t know where the restaurant is located, if you’ve ever been to the Malecon, when you left  you passed The Friendly Dolphin on your left as you came down the hill on the one way street out of the Malecon area.

Sr. Gaston Rochín will be there to welcome you just like a friendly dolphin to his pride and joy as you walk through the doors!