FISH. The Restaurant. Culinary Art at Its Finest!

To some, it will be an epicurean dream, to others, simply one of the best, if not the best, meals they’ve ever enjoyed, 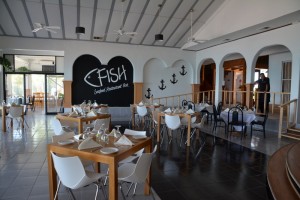 and to all who venture up atop Whale Hill to FISH. The Restaurant, will enter into a dining experience they never dreamed could happen, even in a fishing village known for its variety of fresh seafood. FISH. The 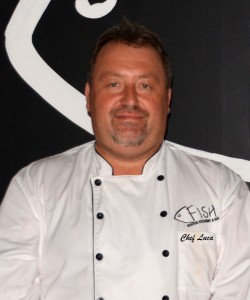 Restaurant is a dining adventure by internationally revered Chef Luca Appendino, located in the same venue where the Lighthouse Restaurant offered its fare for so many years.

Most know Chef Luca from his first fully owned venture, the now iconic Pane e Vino, a classy restaurant appointed in simple elegance serving Italian and international haute cuisine on Boulevard Benito Juarez, which was a breakout success since it opened in June of 2011.

Chef Luca had been contemplating a seafood restaurant for quite some time. He knew 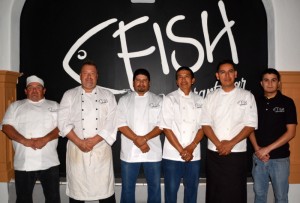 he needed an especially unique location to match the level of quality and service he wanted for his second restaurant. One day almost out of the 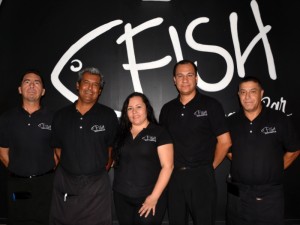 “blue” his dream was answered. The owners of The Lighthouse Restaurant had decided to exit the food and beverage business after many decades of serving the Puerto Peñasco community of American expats and U.S. visitors. They loved his food and his wife, Karina’s business acumen and approached the couple with a proposition to take over their venue and to do with it as they pleased, unaware that Chef Luca had already been thinking of a new venture. The result? FISH. The Restaurant opened on February 25th of 2015.

The caliber of culinary skills you will experience at FISH are neither ordinary or expected. For example, have you ever had flounder sliced as thick a rib-eye steak, served melt-in-your-mouth moist with an exquisitely mixed sauce? Prepare yourself for this one.

Chef Luca lived in the seaside town of San Remo in Italy, having moved there from Turin at the age of 7. By the age of 14 he

knew his career was to be fulfilled in the kitchen of an elegant restaurant. Luca enrolled in Instituto Alberghiero San Remo, one of the world’s most prestigious culinary arts schools, requiring five full years of intensive studies and practical application experience in every phase of food and beverage service and preparation, including dining room service,

concierge desk, wine classifications, haute cuisine planning and preparation, even learning French and German, and much more. Students must study for two full years before deciding which specialty of the business they want to pursue, followed by three more years of intensely supervised apprenticeship in each of the three Institute-owned three, four and five star restaurants.

Every Alberghiero graduate is scouted and hired directly from the Institute. At the young age of 19,

Luca became Sous Chef of the Five Star Miramare Restaurant in San Remo, a town, by the way, known for its quality restaurants. After

two years there he served in the Army for one year and returned to become the Chef of Four Star Villa María Restaurant before being offered the Chef position at the renowned Five Star Tre Pinni Restaurant where he served for six years.

In 2002 a long time family friend came to San Remo and offered Luca a job as Head Chef of his three Tutti Santi restaurants in the Phoenix area. During the eight years he was with Tutti Santi he opened two more restaurants for the family friend. Chef Luca relocated to Puerto Peñasco in 2010 and opened the Mare Blu as Chef and partner. That same year, he met Karina Ortiz, a beautiful young lady with a captivating personality, contagious smile and business acumen par

excellence, who was to become his wife in October of 2013.

Luca opened Pane e Vino Ristorante in June of 2011 and has endeared the loyalty of hundreds of diners with impeccable service and unsurpassed cuisine ever since. Karina is a big part of his life and their businesses.

Now, Chef Luca brings us a restaurant that goes beyond every expectation of the most discriminating 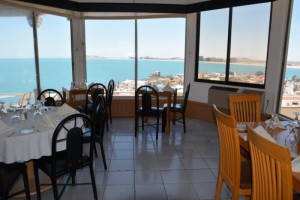 culinary connoisseur,  raising the bar of gastronomic eminence to the extent that it may be destined to become a destination of its own for both residents and visitors.

FISH. The Restaurant is open from noon to 10:00PM every day except Monday. For reservations or more information you can call Karina at 638-110-7137.

In the upstairs portion of his new venue, Chef

Luca has opened a beautifully appointed lounge called simply “Sky”. Guests are treated to stunning views of the Sea of Cortez and the Puerto Peñasco beachfront resort condominium sky lines across the bay from any seat inside or outside

on its spacious patio. And sunsets are always spectacularly camera-ready from anywhere in the restaurant or the lounge.  Sky is open from 6:00PM to Midnight every evening except Monday, with internationally known singer, songwriter and guitarist, Jesse Gerardo, performing Fridays and Saturdays from 9:00PM to Midnight.