The First Act of the Peñasco Palooza 2012 Brought a Surprise! 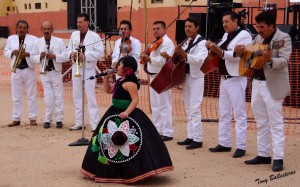 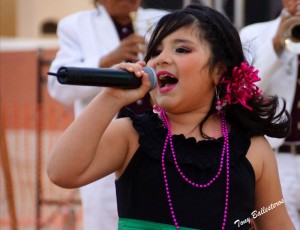 Shortly after the Mariachi band began playing, young Eliana Ramirez, just 7 years old, strolled over in front of the Mariachi group, raised a wireless mic to her lips, and with the confidence of a consummate professional, welcomed the small crowd of 50 or so early arrivals and announced the first song she was going to sing for us, ending it with “…and I hope you will like it!”  What a powerful voice she had!  Mesmerizing the amazed audience with about four songs plus an encore, she carried herself like a seasoned professional of much more experience than her age allowed

The wind, which eventually caused the latter part of the Peñasco Palooza 2012 to be cancelled, was beginning to pick up and created a couple of challenges for this young professional. Undaunted by the wind gusts that tempted to send her beautifully colored sombrero sailing like a saucer with the wind, she held it by the rim in her petite grip and finally removed it, never missing a note or a beat! 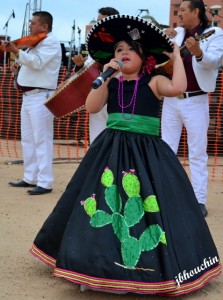 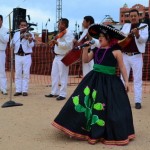 Nor did her enthusiasm wane, nor did she miss a beat even when her wireless mic stopped carrying that beautiful voice during her last ballad.  She kept right on swaying with the melody, and singing with the same feeling until one of the Mariachis handed her another mic. Because of her, the ordeal went off seamlessly to the great appreciation by the audience.

We strongly suspect you will be seeing more of Eliana in future Mariachi engagements. Naturally, when we hear of her performing again, we will definitely be letting our readers know.