Tequila Fest Gave Us a Taste of Real Mexican Culture

We have a lot of events in Puerto Peñasco, most are colorful and fun.  But there are several that seem to project the true culture of this great and historic country and people more than others. 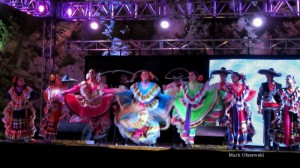 This year’s Tequila Fest was one of those.  Maybe it was the location, maybe it was the way they laid it out, maybe it was the décor, and most likely it was the traditional folkloric performances by the dancers, singers and musicians that continued through the night showering the attendees, including many ex-patriots with color and sounds of the “real” Mexico we all came here to experience. 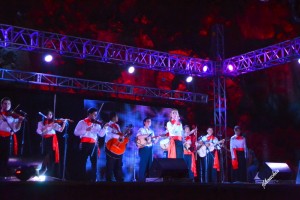 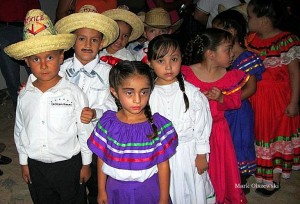 gave away samples of their tequilas.  The idea was kept in front of the business community for the last four years by our local resident, Bill Barvitski, until CANIRAC, the local association of restaurants lead by Martín Martínez, took the bull by the horns, so to speak.

By certain perspectives the event this year was a success, and by all perspectives it showed a lot of promise to become an annual event that will grow exponentially.  From listening to those in attendance, it seemed most were impressed—if not blown away—by the quality of entertainment lined up for the night. 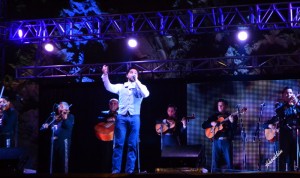 The folkloric dancers in their colorful costumes were superbly skilled. And the mariachi music, as confirmed by numerous comments amongst the audience from the VIP tables, represented the best that most had seen in our beach town.  The Mariachi Estrella de Plata from Hermosillo and Rafael Jorge Negrete with his mariachi from Acatitlán, Jalisco both brought resounding applause from all around the venue.

Speaking of venue, the location selected for this year’s Tequila Fest was held on the side of Whale Hill that faces Benito Juarez which was also where the “Stations of the Cross” Easter procession concluded this year.  Since the procession, they graded the area in front of the steep vertical rock cliff and made it into a natural amphitheatre which the organizers took full creative advantage of with stunning colored flood lighting that made for a striking background to the raised and lighted stage on which 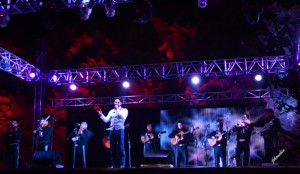 the performances flowed like the tequila continuously until late in the evening. 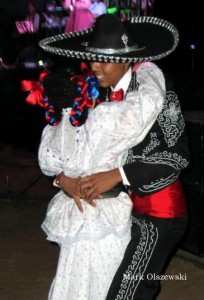 The three major tequila sponsors were all tequilas founded in Puerto Peñasco: Manny’s Beach Club (Manny Sanchez), Tequila Peñasco (Larry Large) and Mexican Moonshine (Roger Clyne). All three tequilas can be found at The Tequila Factory. They had a large display at the Festival as well.

The Tequila Fest was a night of color, culture, folklore, traditional music and relaxed fun for everyone in attendance.  It will be even better next year, so look for the dates and make plans to be there for that taste of Mexico that drives you back—or drove you to call our little paradise your home!