Some Facts You May Not Know About the Great Blue Heron

We are so lucky here in our little slice of paradise by the sea because many beautiful birds also call Puerto Peñasco home, and many more spend the winter months with us. So between the “Snow Birds” (literally) and the permanent resident birds we have the gift of 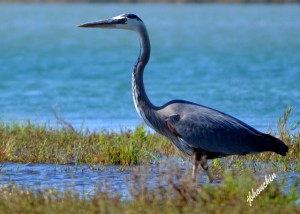 being able to look into the sky or onto the beach, even into the trees to find the natural vista of beauty accentuated by a plethora of color and grace in flight to punctuate the phenomena of sunsets, cloud shapes and the ebbing tides.

Of the hundreds of aviary species around us here, many of which so rare or endangered that they are protected by international laws, one of the largest and most graceful is the Great Blue Heron. A bird of such uncommon beauty no matter how many times we are blessed with its presence, we stop in our tracks to appreciate the sight.

Although the same holds true for two others of the heron family (Ardeidae), the Great Egret and the Snowy Egret, both of which resemble the Heron in shape, but show themselves in pure white feathers, today we’ll share some facts about the Great Blue Heron and include more about the Great and Snowy Egrets in a future blog.

To learn more about the Great Blue Heron visit: