Santa Devoted Lots of Time To Needy Kids (and Parents) In Puerto Peñasco During The Holidays! 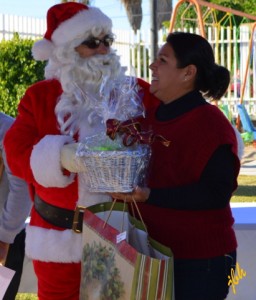 We never tire of conveying the gratitude shared by thousands of impoverished Rocky Point families who are recipients of the selfless generosity of our readers, made up of the expat community here and those of 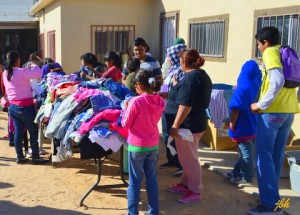 you who love Rocky Point like it’s your second home. Many of you bring down clothing, food and toys when you come, especially during the holidays when the needy need them most.

Were it not for your generous thoughts and actions thousands of kids would have no Christmas at all. Thanks to your donations through the collection efforts of many local businesses and non-profit organizations, each year needy local families can count on having a Christmas meal, a warm blanket, shoes, shirts, pants and jackets. 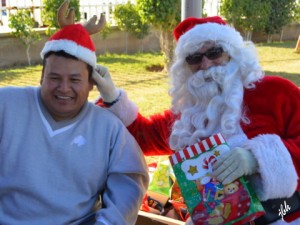 How do we know your indispensable contributions make the season jolly for so many?  We employ the “Santa’s eye view” method of witnessing the tremendous amount of benevolence 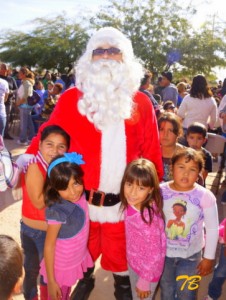 that abounds throughout our little slice of paradise by the sea during this season of sharing and giving, of sparing and forgiving. 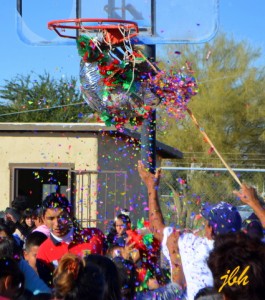 Our method involves simply following Santa as he makes his charitable rounds as scheduled by various organizations. We say “simply”, not “easily”, because Santa’s devotion to making kids happy and parents proud does not allow for much rest. In the case of Mark Olszewski who doesn’t play Santa, but rather becomes Santa from the very moment he dons his oh so recognizable furry, fluffy red and white suit with the elegantly flowing white beard. You may know Mark as one half of Mark and Barb, who, between them, have not been able to say no to anyone in need for over 13 years. Their omnipresence has resulted in, among others, the formation of their own charity called Adopt-a-Classroom that has provided school supplies and equipment to elementary schools serving about 4,000 students here

being deprived of the simplest items. Just imagine what it means to a young boy who receives his very own brand new soccer ball; how important that single present could be in keeping him out of a gang or away from drugs.

Likewise, imagine what an iconic Barbie Doll could mean to the development of a young girl’s self esteem and sense of responsibility to have a little “friend” of such highly perceived value to her imagination and creativity. 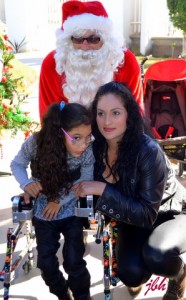 This holiday season, in addition to their normal munificent services, local social clubs spread Christmas cheer to include the parents of children who are physically challenged by crippling diseases and 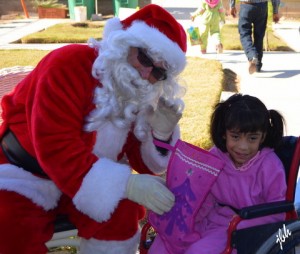 accidents requiring their full time care, love and devotion, plus ongoing therapy and special equipment to facilitate their needs. 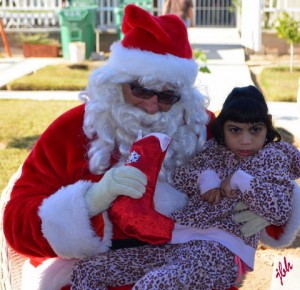 For this, clubs worked with DIF, the 28 year old municipal service for Integral Family Development assistance and invited the brave moms to receive gifts along with their afflicted children. And Santa was there, too.

As we followed Santa around, it became clear that the number of needy kids and families had increased noticeably this season over last; at least one function experienced attendance nearly double that of last year. Good news is that there were toys and other gifts aplenty for everyone. It was as if all you caring donors anticipated this year’s surge of needy Rocky Point residents! 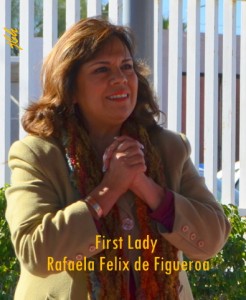 Santa began his rounds on Wednesday, December 11th in the colorful surroundings of DIF’s 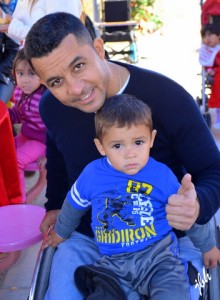 Rehabilitation Center outside recreation area where the jolly guy handed out gift baskets full of beauty products to the devoted moms of the kids in DIF’s rehab programs. Their kids also received gift bags full of warm fuzzy stuffed animals and other kid favorites. The highlight of that morning was when the mayor’s wife, First Lady Rafaela Félix de Figueroa paid the group a visit. The First Lady serves as President of DIF Municipal of Puerto Peñasco and finds a way to be at every DIF function to thank everyone who participated.

After the last mom’s smile was recorded, Santa was only too delighted to fulfill our special request and travel to the Sonoran Spa Resort from deep in that east Puerto Peñasco barrio just to add his Christmas spirit for a photo op to show off the giant tree made from nearly 1,000 feet of garland and 7,700 lights hanging from ceiling to lobby floor. (For more on this creative decoration, click on https://www.sonoranresorts.mx/?p=10726). 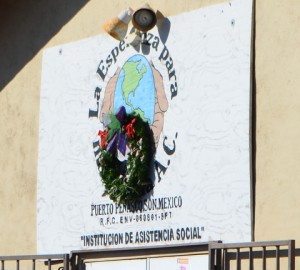 Next on Santa’s agenda was the Big Event (that’s BIG with a capitol B-I-G!) on Saturday the 14th at Esperanza Para Nueva Vida Assistance Center, the totally non-profit, all volunteer 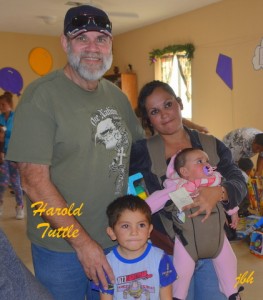 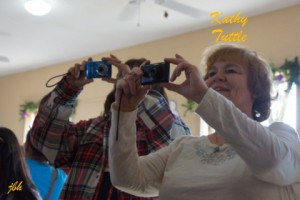 Kathy Tuttle who are Phoenix residents and frequent visitors to their beloved Rocky Point. (http://www.laesperanzaparanuevavida.mex.tl)

Always a huge party (last year an estimated 500-600 kids and adults attended), this year the Center hosted well over a thousand 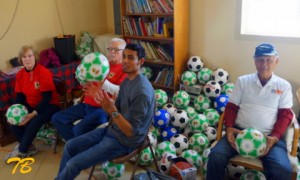 parents and children—none of whom left hungry, thirsty or gift less, thanks to 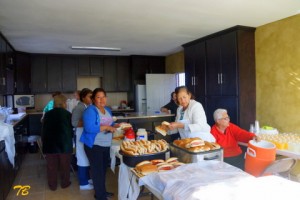 donations from regular visitors and readers like you.  Santa distributed candy through the crowd and a cadre of nearly 70 volunteers, including a bus load of experienced Christian kids party givers from the Association of International Ministries in Phoenix (AIM) handed out toys for all ages, engaged the kids in face painting, finger nail decorating and put on a show for everyone. AIM was founded by Juan and Rose Silva (www.aimworld.info), whose members have helped the Tuttles entertain kids here for many years.

Harold and Kathy along with Barb Olszewski and the indispensable volunteer Center President and Director (since the very beginning), 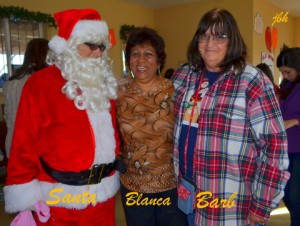 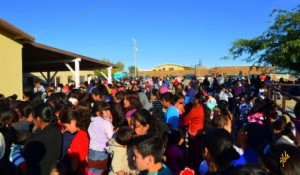 be miraculously everywhere you looked assisting someone with something. They were always with a broad smile they just couldn’t seem to control—because it came from the pleasure they receive from watching the bright, wide eyes of so many kids euphoric in surprise and happiness holding gifts they never imagined could be their very own! We hope these photos will do the day justice in depicting the pure joy of the kids and parents alike. 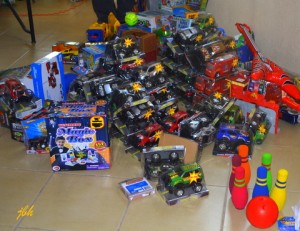 In spite of such a long day, Santa and Barb left the premises with bigger smiles than when they 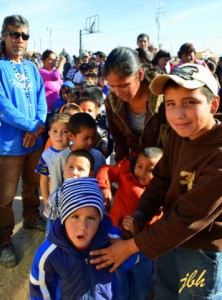 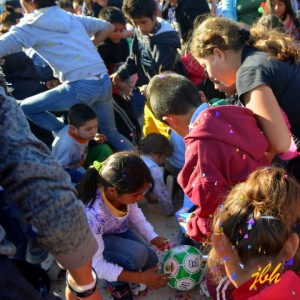 This day might be done, but Santa still had one more round to make on the 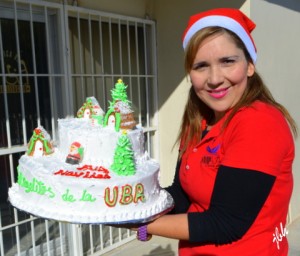 following Tuesday, December 17th. Over a hundred kids, nearly all of whom were 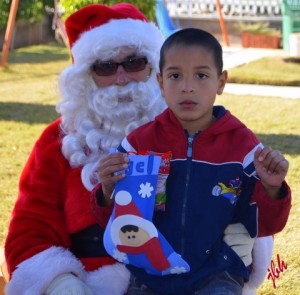 accompanied by at least one parent, excitedly attended the second gift giving party at DIF’s Rehab

Recreation area, as Santa and a couple of members of the Rolling 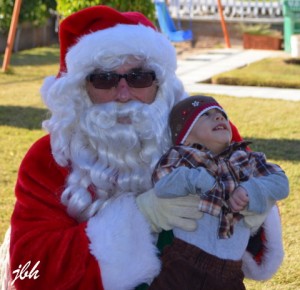 team called the names of parents and kids who sat on Santa’s lap for photos and carried off handmade stockings chock full of small Christmas gifts that kept them still and distracted while the others received their gifts. 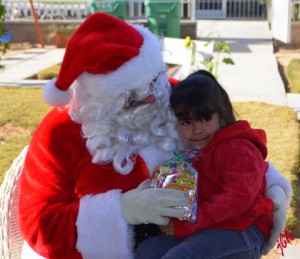 The day was highlighted with special gifts of a wheel chair, a shower chair, a stroller and a walker given to 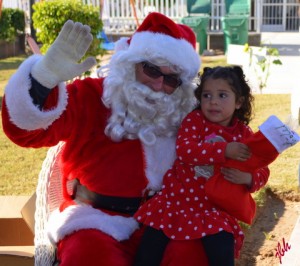 three children of very grateful parents. The equipment was donated by

Rosanne Urbanowicz and made a long 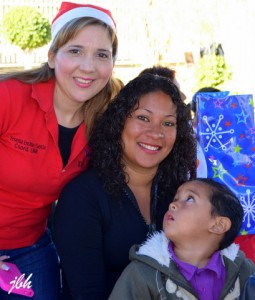 term positive impact on the lives of three families.

In and out of his magical Santa suit, Mark Olszewski is one (and, he’ll be the first to tell you, not the only one) of our expats who personify the locally adopted mantra, “It’s all about the kids…!”

Wishing you Peace, Health and Prosperity for the New Year, we remind you that this blog is powered by www.sonoranresorts.mx, Jim Ringquist, Director of Sales and Marketing.