No Crosses to Bear for this Generous Couple

Mike Bibb seems to have no crosses to bear. That may very well be because he donates all his custom-made crosses to churches everywhere. Ten of those intricately handmade woodworks of art reside right here in our little slice of paradise inside and outside three churches plus the Esperanza Children’s Home.

After retiring from UPS ten years ago, Mike was soon immersed in his life-long hobby and artistic love for woodworking, a creative outlet his long career prevented him from pursuing to the degree his “inner artist” required. 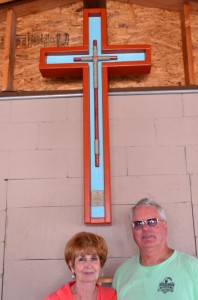 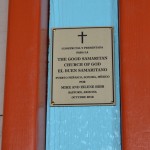 It doesn’t take long after meeting Mike and Eilene, his wife of 40 years, a sweet, petite, dedicated, redhead with a captivating smile, to know that it’s likely her understanding of the complex artist-craftsman in him that keeps Mike organized and grounded (unless she’s holding a ladder for him to scale high off the ground to secure one of his works of art to a structural beam, reciting a complete list of everything he already knew he needed just to make sure he didn’t forget anything before he stepped on the first rung ). It’s also obvious that Mike is not without his contribution to the depth of this couple’s love and best-friendship. You know that his sense of humor, so consistent that it seems to run on its own, just using Mike as a conduit, finding humor in just about everything with descriptions ranging from self-deprecating to hilariously observant, has kept their dark times light and has reliably sown the seeds that reap a steady flow of happiness in their lives, even, one could imagine, when Mike, despite the prophetic warning of Eilene, occasionally smashes his finger with that trusty hammer he ordinarily wields with such accuracy. 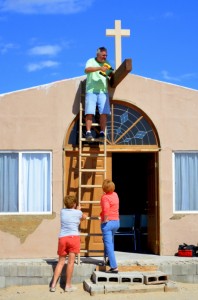 We met them for an interview out at the Good Samaritan Church of God where Mike and Eilene were installing two of his custom crosses, a donation he had offered after reading our blog article of last January about the Church and dedicated intentions of Pastors Edgar and Alma Cabrera (read that story here: https://www.sonoranresorts.mx/?p=3155). 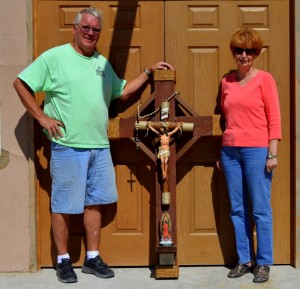 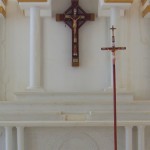 Mike worked quickly and efficiently hanging the large inside cross (we’ll let the picture describe it since words hardly do any of his artistic creations justice), then with two volunteers to hold the ladder, he fastened the smaller cross to an outside strut beam protruding from the apex of the front entrance. In spite of our constant questions, Mike never varied from his mission while providing answers, many humorous, making it a most pleasant visit.

They showed us the intricate crucifix he made and was going to install at the new San Francisco Catholic Church on Calle Josefa near Fremont. Since we couldn’t join them, we took some photos of it and later Mike sent photos of two of them they had placed inside the church. 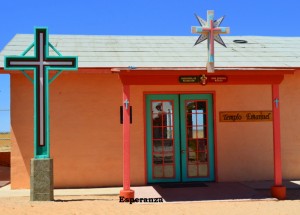 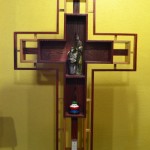 Mike and Eilene have made and installed three crosses in the New Family of God Church on the circle at the end of No Reelección leading to the resorts. One is built on rollers so it can be moved from room 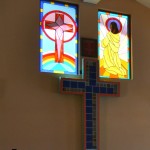 to room as needed.

Their first cross project in Mexico was in conjunction with other volunteer work  they were doing at the Esperanza Children’s Home north of Rocky Point off the Sonoyta Highway.  The sign you see on the road was also made by Mike as well as the one at the entrance to the 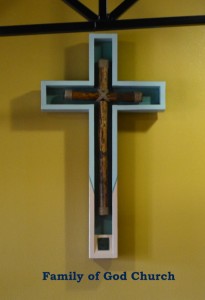 complex.  He also built the porch to the Chapel there and made and installed the stained glass, the large cross outside the Chapel and the two crosses inside the Chapel.

Eilene is an Arizona native, born and raised in the copper mining town of Morenci. Mike was born in 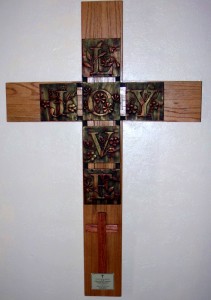 Shreveport, Louisiana so he’s not a native Arizonan like Eilene, but he got here as soon as he could, in the mid 50’s. They call Safford, Arizona home now for many years.

Prior to installing crosses in Rocky Point, Mike and Eilene had donated large crosses to churches in Safford, where they live, and Duncan, Arizona as well as cemeteries in Safford, Sanchez and Solomon. One project in particular that Mike is proud of is the Veterans Flag Memorial he build and installed in the Safford Cemetery in which flags of the five major military services and a POW flag fly high atop twenty foot poles—an impressive sight to be sure.