Nine Facts about the Dolphin You May Not Know

Just off the beach in front of the Sonoran Sea and Sonoran Spa Resort Condominiums it is common to see dolphins frolicking and jumping above the surface of the Sea of Cortez almost year around.  They are such fun to watch and the opportunity to see them, though frequent, never gets old.

The photos in this article were taken by Sonoran Spa resident, Tony Ballesteros, as he followed on foot a small pod along the beach.  An avid photographer, Tony followed them until he was waste deep in water, then flagged down and convinced a passing jet skier to take him further so he could continue capturing these great shots!

Dolphins have no olfactory glands and therefore no sense of smell. They do however count on their fantastic ability to see both under and above the water surface. 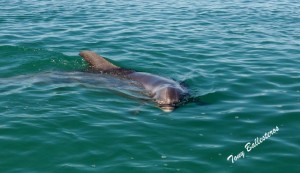 Dolphin brains have two sides. Even when asleep one side of the Dolphin’s brain remains active to protect them from predators as well as allowing them to swim and breath.

One of the most well known Dolphin attributes is that they can communicate with each other—and with humans—by creating voice-like sounds, or a mixture of pulses, clicks and whistles.

Dolphins have a remarkable sense of hearing which is enhanced even further by an “echolocation” capability which allows them to determine the precise location of objects and make them great hunters. 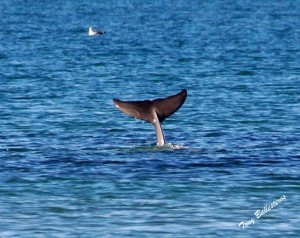 Dolphins love most any kind of fish and squid. They will work together in pods of up to a 1,000 to hunt down and corral schools of fish using several ingenious methods to trap them for efficient consumption.

The dolphin is highly regarded as a friendly, cute and cuddly mammal with which people love to interact and play. Keep in mind that the Pilot and Killer Whale (Orca) are also among the 17 species of the dolphin family!

The dolphin is one of the most interesting creatures in the world, probably because of its intelligence. They are extremely smart hunters. They maintain an immense capacity for learning and patience for accepting instructions made even more remarkable by their ability to communicate with humans.

Finally, worth pondering is the fact that many marine scientists who have extensively researched Dolphin behavior have proposed 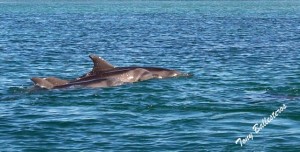 that, due to their unusually high intelligence compared to other animals, they should be considered as non-human persons and should have their own specific rights, and that it is morally unacceptable to keep them captive for entertainment purposes, or to kill them; either intentionally for consumption or as by-catch. (Ref. ^ Jonathan Leake and Helen Brooks for The Sunday Times (2010), Scientists say dolphins should be treated as ‘non-human persons’; from Wikipedia: Dolphins)

Dolphins can swim at speeds of up to 40 kilometers per hour and dive to depths of up to 300 meters. 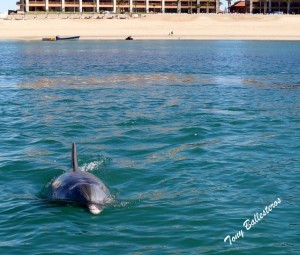 Other than humans, dolphins have few predators. Many species have no predators, making them Apex Predators. Larger sharks, like the Tiger and Great White will prey on the smaller species, especially young dolphins (calves). Due to their intelligence and evasive skills, dolphins usually escape being the main course, though many times they are left with deep wounds from the ordeal.  Fortunately, dolphins have an amazing ability to heal from even the deepest wounds.

Dolphins also seem to be susceptible to a wide variety of diseases and parasites which are communicable among species.

By far, their biggest predator danger is from irresponsible human activities such as the indiscriminate dumping of pesticides and plastics; use of drift and gill nets and other harmful fishing methods. Also damaging to dolphins are the loud noises of offshore construction projects, live military firing exercises and naval sonar which damage their sensitive hearing and cause decompression sickness from being forced to surface too quickly to escape the noise.

Even though you can sight dolphins from your balcony at any of the Sonoran Beach Front Resorts, the further out to sea you go, the more Dolphins you will see. Just take a fishing excursion on a charter boat like the popular Pancho Villa Charter and you’re not only  likely to catch a  fish the size of your youngest child, but you will definitely see Dolphins, sometimes in pods of hundreds!

Check out this You Tube video of a fishing trip on the Pancho Villa just this week.

The video shows an exciting catch and does not include the sighting of a huge pod of Dolphins they experienced on the same trip.

This blog is brought to you by The Sonoran Resorts Sales Group, Jim Ringquist, Director of Sales