Puerto Peñasco ushered in a new Mayor in September, as it does every three years. Mayors serve only one term of three years during which they endeavor to make noticeable improvements to their cities. 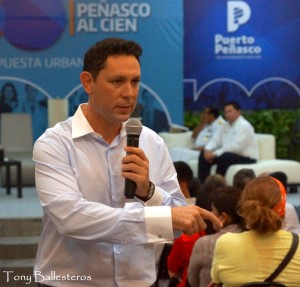 In many cases this system plays havoc with a lot of ongoing projects that affect life in the municipality. One good point with the system is that it guarantees fresh new ideas every three years allowing for improvements to the policies and injecting new energy into beneficial projects that are ongoing.

The new mayor, Kiko Munro, a young, vibrant communicator  who comes from a long-time politically involved family, is fluent in English and understands the cultures of both Mexico and the United States.

On the evening of September 30, 2015, Kiko invited most of the community to attend his presentation called “100 Days of Projects and Actions” during which he expounded on what he promised to accomplish in his first 100 days as Mayor. 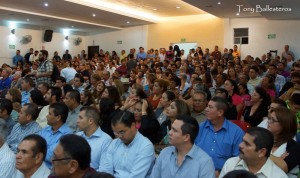 packed house in support of his many promises.  His congenial manner made it easy to join the spirit with which he thoroughly outlined each area of most importance to him and his new administration. It was a refreshing night that gave everyone a feeling of getting to know the new mayor better.

At this point, all he needs to do to endear himself to the populous is make good on those promises within the next 100 days.