LADIES ON A MISSION, by Special Guest Blogger, Jack Hecker

Our blogging friend and regular visitor to Rock Point has favored us with another of his witty essays about human and animal behavior on and around the beach….

Take it away, Jack!

We in Rocky Point and environs are fortunate to be blessed with such great beaches. I have read recently of sea turtle hatchlings finding their way to beaches of Las Conchas from the Sea of Cortez  It took me back to an experience from around a million years ago when I was in my late twenties. 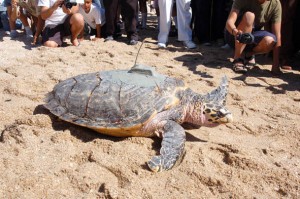 I was visiting relatives at the beach.  We were sitting around after dinner when the phone rang.  It was a neighbor who proclaimed, “They’re coming in.”

I said, “Who’s coming in and where the heck are they coming from.”

“The turtles” she said, “The turtles are coming in from the ocean to lay eggs.”

I said, “Great I’ll have two over easy.”

So off we drove to the beach to see a sight I shall never forget.  Upon arrival we found the area the sea turtles were taking over.  There were three of them and they were trudging slowly up the beach towards the dunes.  They reached the right type of sand at the top and proceeded to build the nest.

At this time a woman approached and asked if we were there to help or to get in the way.  I explained that I wasn’t very good at laying eggs but that I was willing to help any way I could.  She took over like a mid-wife.

Obviously she had done this before and knew what was going on.  The turtles built their nests by turning around, facing the ocean and whipping sand out of the way with their rear flippers.  They went about their business with no concern about our presence.  They finally finished the nests and proceeded to place themselves over the nests and lay their precious cargo.

“Watch them” she said.  She moved up close, right in front of them and shined her light at them.  I don’t mind saying she was quite a bit braver than I.  But as I got closer I could see that the turtles were in like a trance. They had tears streaming down their faces and were almost lifeless, except for an occasional head bob.

I have no idea of how long that process took.  It was so incredibly fascinating I felt like it was just an instant.  Slowly, one by one, they 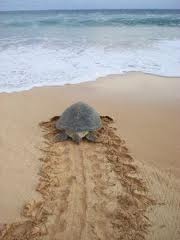 finished their job and started flipping sand over their nests.  Still wondering what the lady meant about helping I watched as the turtles started to inch their way back to the water.  They were exhausted and barely able to move.

Finally, two of them made the water, but the third just sank into the sand.  “Now” she said, “This is where you fit in.”  She and a number of us approached the dear critter and slowly lifted her and gently moved her into the water.  Almost instantly the water refreshed her and she swam off.

The lady watched and said, “The males are out there waiting so they can procreate another group.  Won’t even let them rest a night.”  Then she called them a name I can’t repeat. It had something to do with the males’ parents not being married.

“Oh no” she said.  And with that she instructed us on covering up the path the turtles had made to and from the water.  It seems there are people who consider turtle eggs a delicacy and would break the law to get their hands on them.  Turtles lay anywhere from 50 to 250 eggs at a time.  Unfortunately, like our beloved Arizona Quail, only a few of them survive.  Having poachers reduce those odds is criminal. 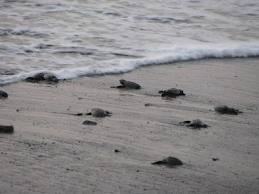 Rocky Point is so unique in that the beaches are so vast and have such a great tidal swing.  I do know that ATVers and others who, when driving on the beach up into the soft sand, leave ruts. I have never seen hatchlings but I understand the little guys, about the size of a small hand, have a hard time getting through the deep ruts and perish.  Give them a break. Please drive on the hard beach preferably at low tide.

Keep in mind that like their predecessors, they do return to their birthplace to drop their precious cargo, so the one you save will someday become another, Lady on a Mission in Las Conchas.