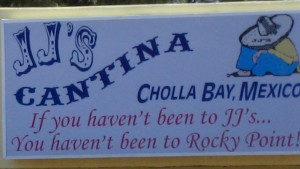 And when you do go to JJ’s Cantina, it’s not mandatory that you meet Joe Anacleto, founder and daily fixture at this historic waterside watering hole and northern Sea of Cortez launching point for some of the best sports fishing on our planet, but you probably will meet him.

Joe’s a tall, ruggedly handsome, dark tanned, sixty-something  with a full head of silvery salt and pepper wavy hair and mustache that stops at each end of his near constant smile, which he spreads contagiously, complimented by his radio quality voice interjecting good humor into conversations of his patrons, most of whom have been his friends for nearly 30 years. 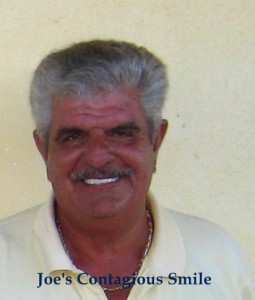 A Hartford, Connecticut native, Joe was raised by his Portuguese parents who were both immigrants, although they didn’t meet until they were residents of the Portuguese barrio of Hartford, only then learning they’d grown up just a few hours from each other in Portugal.

Joe’s personality took him into sales where he worked his way to National Sales Manager in Kitchen Supplies to the home improvement business distributors.

By the late seventies, Joe had opened his own wholesale kitchen supply business and developed a reputation of providing quality products and service. This led to his being chosen to bid on the largest contract of his career in 1977 and also led to his developing a business relationship with John Fowler and winning a giant contract with the Air Force, which in turn would lead to a partnership with John that exists to this very day.

John, a Natchez, Mississippi native worked out of Colorado while Joe now had an office in El Paso.

It was in 1981 that they were told about the great fishing in a small Mexican coastal town called Cholla Bay on the edge of the Sea of Cortez. Both avid anglers, they had to check this out and did. After fishing for nearly a week, before they left, Joe and John had leased a property in Cholla Bay with plans to build a home there. They continued fishing in the Cholla Bay area frequently for the next two years and the home was completed as planned.

In 1983 John, who had been in the bar business previously, suggested they come on down and open a bar in Cholla Bay; they loved the place, there were only a few bars in the entire area including Rocky Point, and there was a place they could get at the “right” price. So Joe went to his attorney, a well known, street smart lawyer and an expert in Mexican law who promptly asked, “Are you crazy? That will never work!” Joe’s mind was made up and he said to his lawyer, “Find a way to make it work.”

Well, it wasn’t easy by any means, but after many complex obstacles accompanied by as much cautionary advice and piles of paperwork, the business was transferred to Joe and John who planned to take it over in late summer of 1984.

Joe came down for Memorial Day weekend in 1984 only to discover that the prior owners were going to shut the doors on his new purchase the first part of June, known then as “El Club de Pesca La Cholla” and that it would remain closed until Joe and John would reopen it in a couple of months. They were told by their attorney that this could not happen. Once the bar closed the entire process of permits and paperwork would have to start all over again. 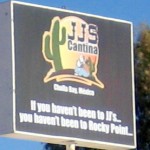 Hence, on June 4th, 1984, Joe unlocked the front doors of the new JJ’s Cantina, accompanied by his first employee, Francisco (Pancho) Villa (honest to goodness real name) who is still with JJ’s today. In fact, they still have 9 employees who have been with them for 20-28 years, countless others who have launched their careers in the business at JJ’s.

Since that day on June 4th, 1984, Joe never went back to El Paso, and has been an active part of tourism promotion, and building the legend on Cholla Bay ever since. 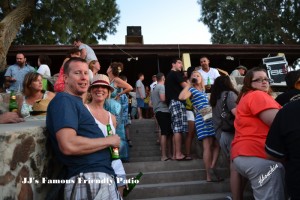 Joe remembers their first “banner” weekend. It was Labor Day of ’84 which launched them forward as the largest bar business in the area. Of course, at that time, in ’84, there were only five [legal] bars in the Rocky Point area: Playa Hermosa, Costa Brava, Viña del Mar, Hollywood and JJ’s. However, what’s interesting to note is that JJ’s is still the largest bar business in the area. In 1987 JJ’s was the largest retail seller of Corona Beer in all of Mexico.  Since switching to Dos XX, and in spite of the economic crisis JJ’s is still one of the largest retail distributors of Dos XX beer in the state of Sonora.

On December 6th, of 1984, Joe was tending bar during the day and planning to take the evening off. In walks a couple of ladies in bikinis from Cholla beach. He started a conversation while serving them their requested libations. His conversation and interest led to one in particular and by the time they left Joe had plans to meet up with Glenda later that evening. They were married on December 6th of 1986 and are looking forward to their 26th anniversary in just a couple of months.

Over the years JJ’s has hit many mile stones to the envy and admiration of other retail establishments in the area. Back in the eighties, Joe recalls, “You could not buy a post card to send back to the states; and this was a time when post cards were so popular.

We started selling T-shirts just so folks would have something to take back with them with our name on it.” One can only guess at the thousands they must sell each year. 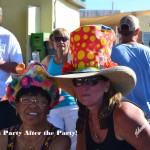 Many, if not most, of the events introduced by JJ’s have become legendary: In ’87 began the “Angler of the Year” fishing tournament held three times a year when 35 to 70 sports fishermen compete to be named the best of the best among entrants by accumulating the most points from their catches during the three events. Today, it is still one of the most coveted prizes among Sports Fishermen in the Sea of Cortez.

In 1989, just for fun JJ’s introduced the now legendary One Club Open where, twice a year, from 70 to 120 golfers choose a club and negotiate their 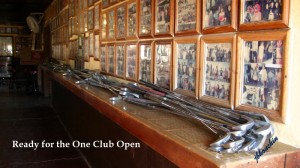 way across the muddy low tide area of Cholla Bay plunking a golf ball into 18 hula hoop sized “holes” before the tide begins to rise.

In 1990, JJ’s drew entries from throughout Mexico and the southwest US to their first “Bath Tub Races” that became the event not to miss for 20 years as young and old contrived every conceivable design of placing workable wheels on the base bath tub structure and then pushing or pulling it through the muddy low tide basin of Cholla Bay to a finish line in front of the famous outdoor patio of JJ’s Cantina. Suitable summer tides have prevented this much sought after competition from taking place for the last two years, but, rest assured, it will resume upon the behest of Mother Nature. 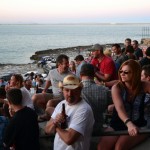 It has been argued that the saying “No Sniveling” originated at JJ’s.  However, Joe sets the record straight with a bit of historical data.  JJ’s sort of inherited the title of originator of this classic saying as a result of an article in the Wall Street Journal back in the early 90’s. “In actual fact, a customer brought that saying in on a street sign that he had taken from a Tucson bar,” explains Joe, “the name of the bar was Someplace Else, owned by a guy, I believe, by the name of Jim Anderson. The only reason I know that is because when our customers kept asking why we didn’t print up more of them, I called him and got his permission to do so.”

Then, six years ago, when Roger Clyne and The Peacemakers added the January Jam to their concert, they chose JJ’s as the venue.  It has sold out every year since. Plus each year the night before their “Circus Mexicus” concert on Sandy Beach, drummer PH Naffah holds the now famous fund raiser, “Hot Dog and a Smile” that raises money, toys, clothes, blankets and food for the “Esperanza para los Niños” Children’s’ Home. The Bloody Mary after Party, “Mañanathon”, on Sunday after the concert is held at JJ’s also. 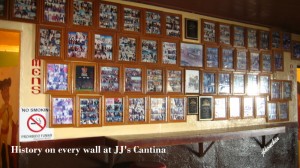 This weekend, when Roger and PH come to Rocky Point for a special performance by the two of them, they’re bringing an up-and-coming band called “Black Carl”. Black Carl will perform Friday night, October 12th on the open air patio at JJ’s Cantina with Jason Boots, the accomplished singer/songwriter who has opened for RCPM. Admission is only $5 Dollars for the night’s entertainment.

It’s not mandatory that you meet Joe Anacleto when you visit JJ’s, but you’re gonna want to—and you’ll always find him at or near the front entrance to the Cantina, and happy to make your acquaintance!  Oh, and look out for that smile…it is contagious.