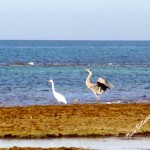 You can usually expect an interesting, if not downright exciting sea life event to take place around Sandy Beach, and yesterday was no exception; it was just more like a circus of events going on all day. Great Egrets 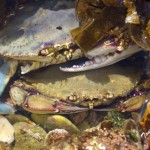 and Great Blue Herons were hanging out together, crabs were mating, antique planes

were flying by and from early in the day dolphins were jumping just a hundred feet from the beach.

Then from early afternoon just under the surface, what appeared to be sea weed bunched up formed a long dark line just off the edge of the beach stretching from in front of the Sonoran Spa and Sonoran Sea almost to the Reef. 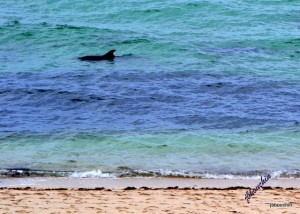 Next thing you know, dolphins were swimming toward the shadowy area and diving into it. Without these photos, it would be hard to believe how close these dolphins came to the beach.  Now, dolphins know better than to get too close to land, especially during an ebbing tide, because their strong suit is not in swimming on the beach. 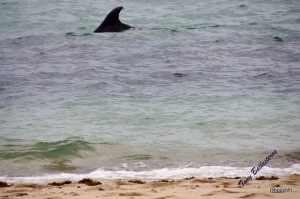 Unusual behavior like this could mean only one thing: the shadowy long formation just under the sea surface in front of the Sonoran Sea and Sonoran Spa resort condominiums was not sea weed. It had to be some kind of food, but what could create a four-five foot wide strip that stretched so far down the beach? Fish? It would take millions, perhaps billions of fish to create such 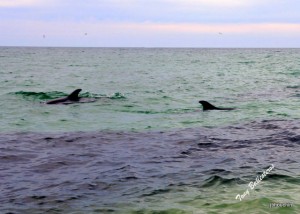 That question was not going to be answered from a fourth floor balcony.  So, within minutes there were two of us, and shortly, four of us either wading into what turned out to be the largest school of baby sardines any of us had ever seen, especially this close to the beach, or documenting the event with photos. 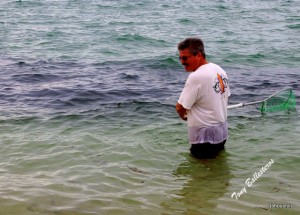 Photographer Tony Ballesteros was photographing me and Mark Scimac as we ventured among the tiny creatures with the net. Mark’s wife, Cindy (not pictured—sorry Cindy!) was a spectator.  Mark and Cindy are frequent visitors to Rocky Point from their home in Chandler, AZ.  They always stay at the Sonoran Sea or the Sonoran Sky and were certainly here at the right time and place on Wednesday. 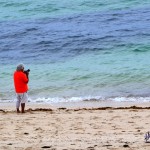 Indeed, as we placed the net into the midst of the school, we could easily make out the masses of tiny sardines swarming away from the submerging object.  Even more clearly identifiable were the larger sardines swimming along between the beach and the edge of the school as if guiding the babies and protecting them from swimming onto dry land. There may have been the same type of guiding going on at the outer edge of the school as well but were not visible from the angle afforded us in the water. 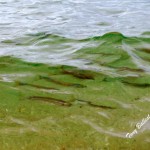 Result: Question answered and verified. In fact as the tide dropped, the “guides” were getting stuck on the 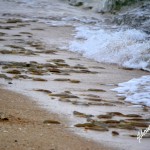 beach by the hundreds and all showed amazing abilities to flop back towards the water. We had a chance to get some up close shots of them at that time. 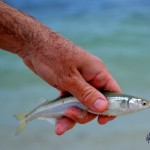 Wednesday was just another great day of fun, adventure and education on Sandy Beach in front of the Sonoran Sea Resort Condominiums!