BooBar, One of Malecon’s Most Popular Hang Outs, Continues to Sizzle!

With happy customers leaning out the large windows beckoning to ambulant visitors on the main street below, it’s hard, nearly 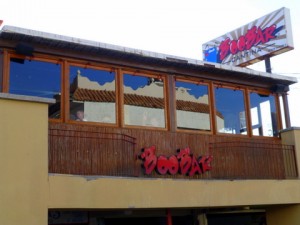 impossible, not to find and climb the steep stairway leading to the contagious revelry permeating throughout the colorful décor of the BooBar.  It’s small but never seems cramped, and the views from either side lead to the street action 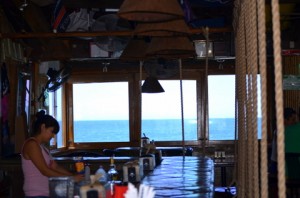 below on the Malecón or to the infinite beauty ever-abounding upon the Sea of Cortez.

More than anything though is the welcoming, friendly attitude of every member of the BooBar staff—that’s everyone, without exception—who seem to be there just to serve you and be your friend. This atmosphere at the BooBar is a result of constant training by partner and manager José Flores, who along with his partner, Scott Kimbriel, took over the bar from Randy Gahan (Wrecked at the Reef) six years ago after José had managed it for the previous year and a half. 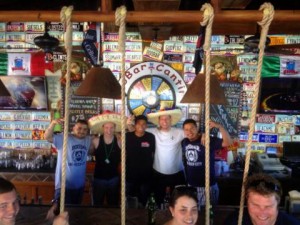 José is a strappingly handsome young man, fluent, even exuberantly expressive in English, who exudes instant likeability, and one of those you know immediately 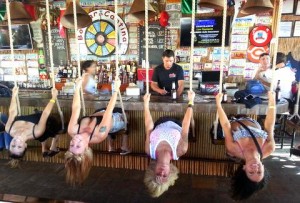 was born to be in the service industry.  In fact, his philosophy on service and his training practices, which begin with teaching the importance of greeting each and every guest, are surely going to be key to the continued success of the BooBar enterprise. Dedication seems to run in the family as his equally personable and absolutely stunning wife, Cynthia, managed the new BooBar Souvenir Shop up until days before recently giving birth to their new daughter, Marbella.

José credits his partner Scott with the financial success of the business due to his expertise with “running the numbers” for José’s ideas which saves him many headaches. It was this kind of team work that justified several recent additions to the BooBar 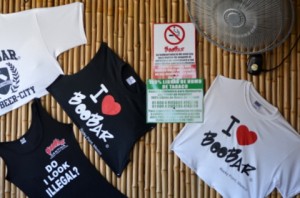 enterprise, namely their new signature  product outlet located on Calle Ulloa next to Viva Mexico Asadero, where you can buy a plethora of BooBar goodies from T’s to jewelry, caps to unique tequila containers (you’ll just have to visit to appreciate these items), and so much more.  The latest addition is the BooBar Pizza Parlor just a couple of doors away from the bamboo-lined stairway to the bar.

Inside the bar itself, José recently installed a surprise for his regulars in the form 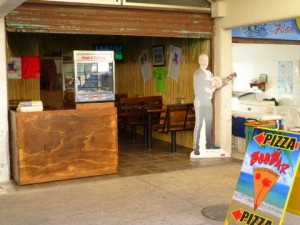 of swinging bar seats—literally, swings—an idea he brought back from Cancun—that hang from his ceiling, which he had to have reinforced by a construction engineer.  If you’re visiting for the first time, they look so natural lining the bar. When regulars see 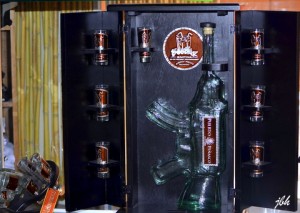 them for the first time, a double-take is definitely in order!

Because of José’s penchant for ultimate service, the BooBar menu is quite varied with anything from seafood to burgers, chicken wings to quesadillas, and if you still don’t see what you want on the full menu, no problemo, amigo, just ask and they’ll make it for you! (Endangered species not included.)

BooBar opens at 11:00AM on weekdays and 10:00 AM on weekends and closes when the last customer leaves. As we all know, the 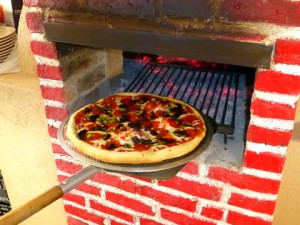 seasons in Rocky Point are like a roller coaster and BooBar goes along with the ride. They’re always open during the many special events that take place here with their peak season running from February until around the 4th of July, and the months of October/November. Again, anytime there is a special event during the off months, you can bet BooBar will be hopping. Otherwise, they close on 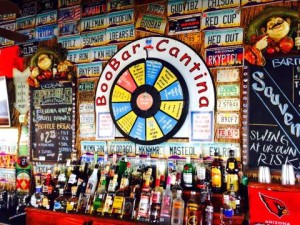 weekdays during those off-peak times.

It’s rare you won’t find live music every weekend at BooBar. In addition to their house band, The BooBoys, you may find a band imported from Tucson, Phoenix, Prescott, San Diego and other parts. They don’t seem to have a problem getting guest entertainers to show up because partner Scott Kimbriel’s digital genius encompasses programming quality sound adjusted specifically for the dimensions of BooBar. He also has just upgraded all the musical equipment that is part of the bar, including the percussion set, microphones, speakers, amps, mixers and other modern electronic accoutrements which musicians love about BooBar. Obviously, because they’re so personal, it’s a BYO (Guitar, flute, sax, xylophone, keyboards, etc.)

You won’t hear any sniveling at BooBar for the simple reason that people just don’t snivel about Having Too Much Fun!