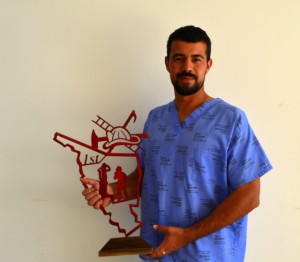 realistic simulations of maneuvers that would be necessary to enter and save someone from a tight and dangerous fire-engulfed building. Not only did Alonso compete one on one and win against 31other firefighters from across the state of Sonora, he accomplished this feat in the blazing heat and humidity (100°/75%) that terrorized these brave men on that June 14th Saturday in Puerto Peñasco!

As a member of the Puerto Peñasco Fire Department for 2 ½ years, Alonso has nabbed the opportunity to enter three of these events held each year during the state convention, placing third in his first event and second in last year’s event. He credits intense, targeted training and determination for his victory, made even sweeter this year because he beat the younger Caborca bombero who had bested him last year.

Participating in 12 arduous exercises wearing nearly 100 lbs of full firefighting gear under punishing weather conditions took its toll on nearly half of the contestants who succumbed to the elements before finishing, many requiring medical assistance for dehydration and exhaustion.  But the

unrelenting, well-conditioned Alonso (blue helmet) persisted through the final, and toughest, obstacle that involved belly-crawling through a long tube not much wider than his heavily laden uniformed body to secure a life rope around a 180 lb “victim” then back-crawling out of the tube before pulling the “unconscious victim” to

life-saving fresh air and dragging him across the finish line—well ahead of his arch-rival.

At 33 years of age, this Puerto Peñasco native’s legacy is not confined to just the risky business of

firefighting. Alonso completed his certification as a Registered Nurse nine years ago in Nogales and serves in that capacity at the new AmeriMed
Hospital, which is currently in transition from Sandy Beach Medical Center under the direction of  Dr. Jesús González-Gaytán.

As if these two critically important careers weren’t enough, Alonso is also a para-medical instructor at UTPP and is the fire department’s  instructor in emergency vehicle operation and water and ladder control for all new firefighters.

With what you now know about Alonso Gauna Krawstor, you won’t be

surprised that just 1 ½ months ago he married brave and beautiful Damary Camacho, also a firefighter.

All in all, the perfect blend of guts, glory and love!