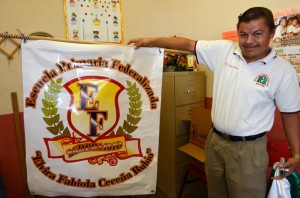 Mark and Barb Olszewski pulled their pick up to the front gate of “Elvira Fabiola Ceceña Rubio”, the very first primary school they adopted 10 years ago, the federalized school that motivated them to found their Adopt-a-Classroom Charity Organization. (http://www.rockypointclassroom.com) Since then, the number of schools that are beneficiaries of the truck loads of supplies their Facebook and forum followers regularly bring down from the U.S. has grown to 12 schools including one in Port Lobos, a several hour drive down the coast. 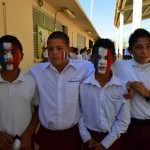 On this day, the entire student body was outside under the covered pavilion participating in the International Peace Day celebration that is recognized in over a hundred countries each year in October, and Elvira school had over a hundred tiny students dressed in costumes depicting the dress and culture of the Latin American countries as they stepped center stage in small groups and sang, delivered orations or danced interpretations of the varied Latin folklore, faces painted with the colors of 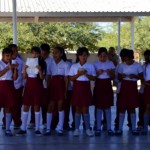 Brazil, Argentina, Peru, interspersed with costumes of gypsies, Charros, Angels, at least half with handmade Doves of Peace they waved from the end of a long stick.

As immersed as these children were in the roles they were assigned to play that day, at least a hundred sets of wee little eyes were aware of the carts of supplies Mark and 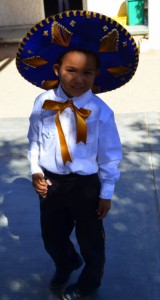 Barb were hauling into a small room outside the Director’s office. None, however, were more aware, or grateful, than Profe. Héctor O. Velarde, the principal (Director) of the school, who couldn’t thank us enough for the attention or gifts we were donating to his school.

Barb gave us a quick education noting that each of these federalized school facilities are actually two schools with a separate faculty and student body, even a different name in most cases, in the mornings from approximately 7:00-7:30 AM to approximately Noon; and a complete change of staff and students using the same facility in the afternoons from 1:00 PM until approximately 6:00-6:30 PM. 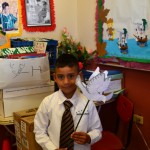 Therefore, Mark and Barb must evenly divide each school supply delivery and clearly mark and place them in predetermined locations for each school shift.

This unique method of scheduling usage of the buildings is not without other complexities for those dedicated folks like Mark and Barb: Over the years, Mark has found that if something breaks, like faucet fixtures which happened recently, or more seriously, the plumbing, which was the original problem that catalyzed the formation of this noble effort by the Olszewskis ten years ago, the two faculties are both reluctant to commit the funds to make repairs even in the rare occasions when they have the funds to do so.

Coincidentally, it was the old Elvira school facility where Barb first discovered that the children had to pour buckets of water into the 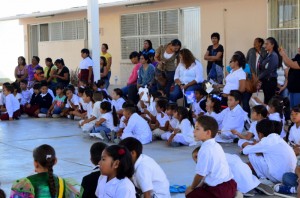 toilets to flush them because there was no water flowing into the bathrooms.  She and Mark scrounged around town and collected enough supplies and repaired that plumbing issue to get the toilets flushing again. During that project they discovered a serious lack of tablets, spiral notebooks, pencils, crayolas, sharpeners (a luxury item), drawing and note paper, rulers; just never enough material to go around. Of course as they began to observe other schools it was obvious that this was a common need among the schools in the more needy neighborhoods. Thus was born Adopt-a-Classroom. 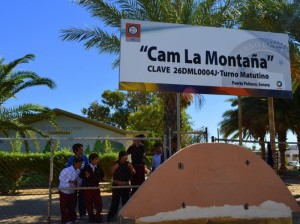 We reluctantly left the Elvira school, snapping photos all the way to the road. Next we followed Mark, his truck now partially unloaded, over to La Montaña School for children with special needs.  The superintendent seemed very happy to see Mark and Barb and was most accommodating in helping to haul about ten case boxes of school goods to their store room, enlisting the eager help from some of the 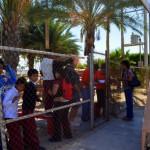 students.  As a whole the group who met us at the fence was a happy bunch of smiling, laughing kids anxious to make acquaintances. 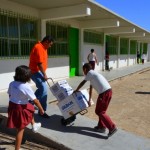 En route to the storeroom we passed through a fairly large area that was obviously a crafts room with long table on which were rows of fan-shaped shells no more than a couple of inches around and adorned with a clever assemblage of neatly tied bows (serving as angel wings), carefully shaped pipe cleaners that formed a halo over a cotton ball (the angel’s head) 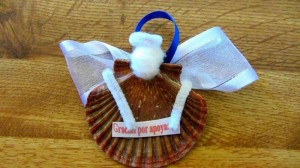 and draped across the front of the shell to form the two arms that held a sign saying, “Gracias por apoyarnos.” Thank you for helping us. Here’s a photo of one them taken by Mark. These Angels were made by the students at La Montaña School for Special Needs Children and are 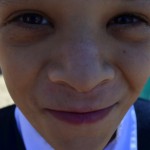 available for a donation of $5 each to raise funds for the school.

Adopt-a-Classroom has volunteered to handle the sales for the school and 100% of the funds will go directly to La Montaña to help the children.

If you would like to make a donation (and hang one of these cute little angels on your Christmas Tree, or include it with your Holiday decorations, even give it as a gift) you can contact either member of this hard working twosome in any one of four ways:  by email at RockyPoint@myway.com; by phone from the US at 602-324-9529; by local phone at 383-4963; or visit the link below and leave a comment on their Facebook page: 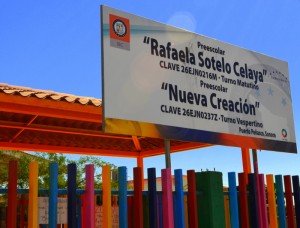 When you volunteer to help the Olszewskis, don’t expect to stand around anywhere for very long. After all, they have school children to help! So, we were off to the next school (which Barb gently reminded us were actually two schools operating in the same building).  This was our final delivery and these were two fairly new preschools where we learned yet more about how the system works as far as school operations go. 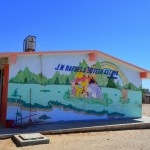 “Rafaela Sotelo Celaya” with 150 preschoolers enrolled.  The afternoon school, even though it was open with 65 preschoolers enrolled, carried the name Jardín de Niños “Nueva Creación” (New Creation). Because it did not have a Director, there was no individual’s name assigned to it yet.

Until a Director for the afternoon school is hired, the Director of the morning school, Directora Martha Soto Soto, is responsible for running both shifts.  That means this dedicated “Maestra” works from 7:00 AM until 6:30 PM every school day.  She was not complaining when she explained the situation. It was obvious her 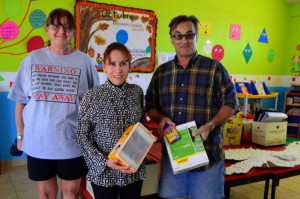 concern was for the children, knowing her extra duties are temporary.

As all the Directors we had met this day, Maestra Soto was gratefully appreciative of what Mark and Barb were doing for her kids. She left a parents meeting temporarily just to answer our questions and pose for a photo, unable to withhold a thankful grin. 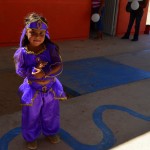 special needs in Puerto Peñasco, and know that 100% of your donations are going directly to those in need.  In the case of Mark and Barb Olszewski, you’re dealing with a hard working couple with a thirteen year reputation of trust from a following of hundreds of regular Rocky Point visitors and 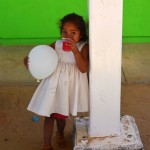 residents who come by their home and drop off whatever they can bring down every time they visit; a they’re a couple respected for donating their own time, energy, money, transportation, storage space inside their own home (that’s a story in itself, and one they can laugh about!) and helping many organizations, even other charities to help with donations  and raising funds.

To learn more about Mark and Barb, you can read our previous blogs about their dedication and involvement in different worthwhile charitable events. Here’s just a partial list of those stories:

https://www.sonoranresorts.mx/?p=5528 7/22/12 “Plenty of Tacos and Beer to Go Around at Rolling Rockies Fundraiser”