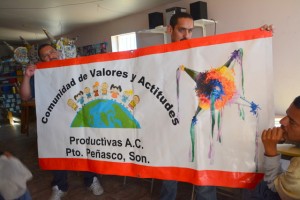 One of the many narrow graded roads in Puerto Peñasco (in this case, the 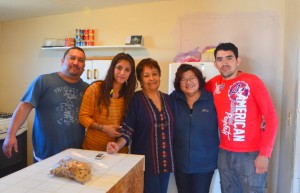 one that runs alongside the modern little “Hot Point” motor hotel on the road to Sonoyta  just outside of town) takes you to a small fenced framework house inside of which will fascinate even the most disinterested visitor with its simplicity. Piñatas have intrigued most everyone for centuries—their concept, their culture, their entertainment value, and so much more. What makes them even more fascinating is 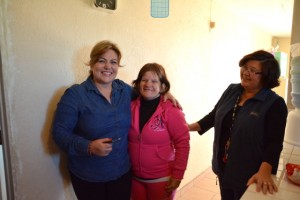 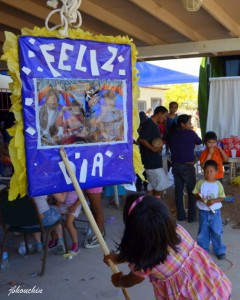 uncontrollable delirium with two simple tools that include a decorated stick (think broom handle adorned with colored, usually curled, crepe-type paper) and a simple blindfold. And, of course the Piñata itself.  And, just in case you’ve lived most of your life at the depths of an El Pinacate steam blast crater, you can still be assured of  wonderment at the first sight of a Piñata being used for its sole purpose—to drive kids nuts! 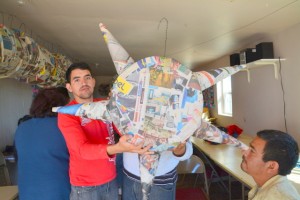 Even the simple methods used to make Piñatas are fun to watch and be a part of their creation. Literally, every Mexican kid ever born knows what a Piñata is, what it’s used for and when that time comes. Who wouldn’t know when all it takes is a congregation of about 8 or more children with any reason to celebrate.

In earlier days, a typical flight from Mexico City to, well, anywhere North, had more Piñatas aboard than human passengers. And, by the way, that was fine with everyone because they weren’t as big as those pyramid sombreros that flew on the same ticket!

Piñatas are made of papier-mâché, in various sizes and qualities such as clay containers under colored paper to dramatize the 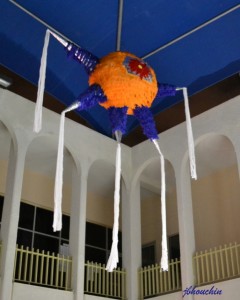 effect when finally burst.  Thin paper strips held together by the simplest combo of flour and water then shaped/sculpted to resemble (some more 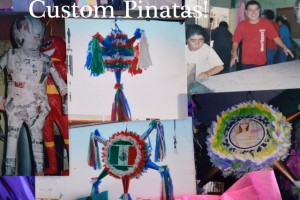 vaguely than not) a pig-like animal, a burro, a little brother :), etc. Since the fifties, seems they’ve become more modern in design, round in the middle with up to seven shiny pointed cones protruding around the edges decorated with long thin strips of even more colorful sprouts.

The Piñata has a deep historic meaning and actually dates back over 700 years to Asia-where they invented paper—when Marco Polo discovered them being used for celebrations with bright colors and elaborate decorations.

By the time they arrived in Spain, the Catholics had figured out how to use the design and the game of bursting the 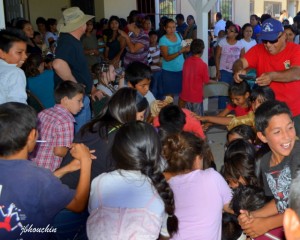 Piñata as a method of religious conversion. Piñatas were made with seven pointed, brightly colored cones around a clay center representing the

Where this “children’s’” game gets a bit rough, like taking “Pin the Tail on the Donkey” to a whole nother level (think suitable for pre-teen gangs), is when the Piñata is hung on a pulley-powered rope which is manipulated by the cruelest grown-up in the barrio, to keep the (yes! Blindfolded!) kid from connecting with one of those “knock it outta the park” direct hits until every kid 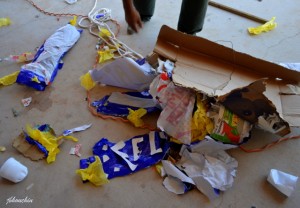 in line has had a chance at it. Probably oughta mention, again, just in case 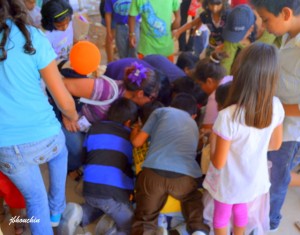 you’re of that Pinacate time-warp, when a kid does bust open the Piñata, tons of candies, Chiclets, etc explode for what seem like blocks as the frenzied onlookers dive (literally!), rolling over and over as if the stuff was going to stick to them! And, who gets left out of the first, all-important seconds of their own breakthrough? The poor little blindfolded kid whose first inclination of success comes in the form of a three-sided tackle from which he may or may not ever regain his orientation!

Not as wimpy as “Pin the Tail on the Donkey”—but not to worry—remember this is Mexico! The blindfolded kid’s Mama is going to make sure her baby gets his share of the treasure! Right! She takes the dive!

For these and other reasons the Piñata Factory can be a lot of fun to visit. In the case of this story, it’s also a very

touching experience where a small group of about 14 kids barely over 20 years of age come to work every day, in a donated van; because of where these kids come from, each and everyone with special needs; each and everyone having grown beyond the age (20) of being allowed to continue attending the La Montaña school for children with special needs; each and everyone now required to produce for society because there simply is no other place for them to continue in the protective, supervised learning environment they’ve been a part of since preschool.

So what’s next for this unique combination of societal puzzle pieces? You might think of a comment like, “Just look up. That blue sky is not empty, those white fluffies are not figments of faith…” But, you don’t even have to look up to 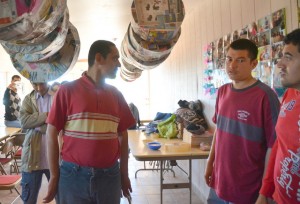 find the future for these very special young people. That’s because of diminutive Melba Moreno Lerma, less than 50 inches tall, with a heart big enough to park your VW Beetle in, and, most of all—Most Of All—fulfilling a life-long dedication to dealing with what she has known for 20 years was going to happen to these specially selected young people. She spent her career on the meager payroll of La Montaña but retired immediately upon her first day of eligibility in order to begin the second phase of her life: To continue helping the former students of La Montaña who can’t help themselves. You can see her satisfaction from the happiness in her eyes, her smile, her focus, her love of life.

This little organization with the great big heart is run totally on donations. And you won’t hear Melba describing the 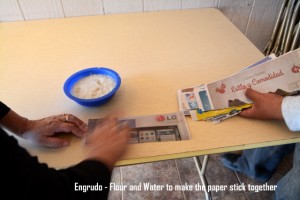 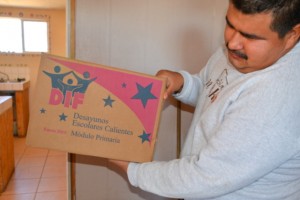 help make things run smoother, better, more efficiently. Her kids portray the same positive attitude—even the ones who cannot speak can tell you what they do and how they do it.

Here is a short list of items the group could use to help their endeavors (and wouldn’t be that hard to bring with you during a trip):

running water. Since  FHF spends a lot of time down here working with Rotary Youth volunteers building homes for deserving families, we were hoping for exactly what happened: the group had a time slot in June to accept and complete this project!

There are no words to describe the surprise and awe in Melba’s gratitude as she heard the news!

We are also working on getting the Piñata Factory set up at the big April 18th Mermaids and Pirates Extravaganza in Shrimp Plaza—this year, bigger than ever (See our Pot Pourri page for more details on this exciting event.)  You will be able to watch, maybe even help, make a Piñata right there! And of course you can purchase one or more for your own festivities as well.