Whale Watching Off the Beaches of Puerto Peñasco!

Approximately 80 species of whales roam the world’s oceans and seas, and about one third of them spend time in 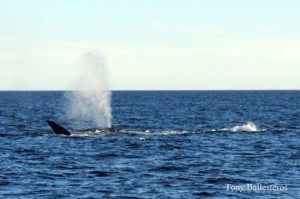 the nourishing warm waters of the Sea of Cortez, either as permanent residents like the fin and sperm whales. A good many of the rest of the species at least drop by the southern entrance to the middle of the Sea during their migration in search of mates and to enjoy the variety of foods that live here.

Do you think human mammals travel great distances for the extended 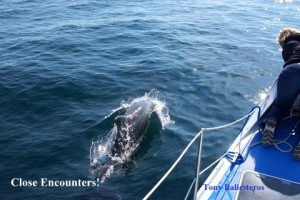 enjoyment of a refreshing sea and oh so pleasant weather (plus the dozens of other intrinsic amenities particular to our little slice of paradise by the peaceful sea)?  Consider our mammoth marine mammals who, by instinct developed over a period of 50 million years, travel tens of thousands of miles each and every year—with no vehicle other than shear personal energy—oh, and without stopping for a single meal during the grueling trip from the near freezing arctic waters  to the kinder blue Sea of Cortez, many of whom sing their own original love songs all the way and in such a deep resonance as to be heard (and felt) for up to 20 miles around. When you’re traveling that far to meet a mate, it stands to reason that you can’t start announcing your intentions too early, eh? 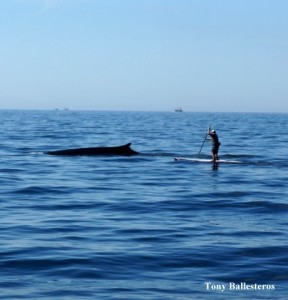 If we gave trophies for the mammalian winter visitor traveling the furthest to enjoy our glistening sea, the 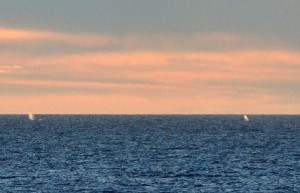 Humpback Whale takes it flippers down. Humpbacks at around 15 meters long and weighing in at 25 to 30 tons migrate round trip from the northern  Polar regions to as far south as Cape Horn each year in search of a mate.  Fortunately for us, the humpback whale seems to have a lot of fun swimming up the Sea of Cortez to our calm waters near Puerto Peñasco. In the last few years we’ve seen more and more of them coming in closer to the inhabited beaches—so close, in fact, that it’s not rare that you can photograph them from your balcony!

Only a few years ago, we had to go out 10 to 15 miles to catch a glimpse of humpbacks and fins frolicking freely across the sea surface. Last year and this year, as these photos reveal,  they are within plain sight of Sandy Beach. 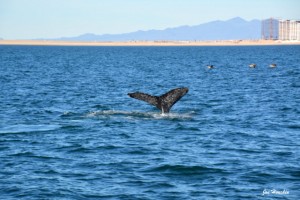 And what an exciting sight it is!

You can recognize a humpback right away because it lifts its wide heart-shaped tail (called a “fluke”) straight up into the air as it dives. But how 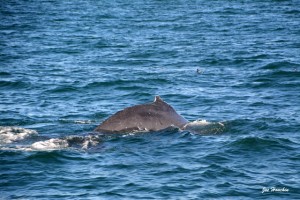 it gets its name is from the hump shape it makes with its back as it prepares to dive, as shown in these up close and personal shots by our friend and professional photographer, Tony Ballesteros. Your first sign that you’re about to see a humpback, or other whale for that matter, is by the powerful misty spray that shoots upwards of 20 feet in the air just as they surface. As mammals, these animals must breath, so after a deep dive of up to a quarter to half a mile during which they may take up to 15-20 minutes or longer, a whale is quite anxious to exhale and take in some fresh oxygen. 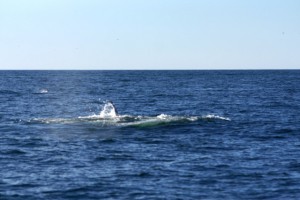 The antics of a humpback include slapping their huge flukes flat against the surface in rapid succession, called “lobbing”, which causes  an extremely loud sound. Marine scientists have several theories about why a whale does this: it could be to stun their prey, attract a mate, or defend a mate.

Perhaps their most famous maneuver, and a truly awesome sight, is their ability to breach from the water, causing their entire body to clear the surface on occasion. And there is no “belly flop” even remotely like that of a 30 ton belly flop! 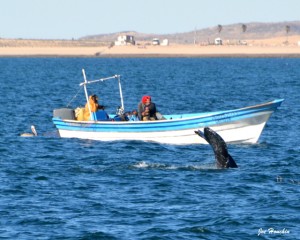 Puerto Peñasco from December to March should reserve a trip. In fact, there have been whale sightings as early as last November, and last year there were sightings in April.

Fin whales are still a bit shy and hang a little farther out, but the 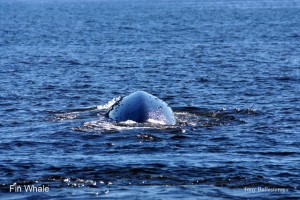 humpbacks seem to have adopted our nearby waters as their playground. According to Oscar Preciado, Captain of this 42 foot sailing catamaran, Tempo, when humpbacks find a place where the water is right and they feel comfortable, they’ll return year after year. And they are quite an animated bunch as well, fun to watch and photograph because they have no fear of boats or people, especially if the boat pilot knows how to approach and follow the big guy to keep 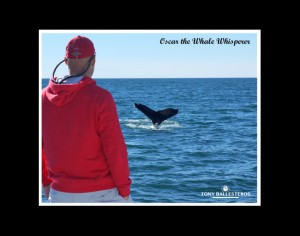 him in a playful mood.  Oscar earned the moniker of “The Whale Whisperer” through his uncanny ability to keep these giant cetaceans playing extremely near the boat, much to the glee of his passengers.

In impeccable English, Oscar shares his extensive knowledge of marine life, vessels and astronomy he learned from the prestigious Cetmar Academy located at the entrance to Las Conchas where he majored in Navy Mechanics.

As captain of the Tempo for eight years Oscar is a certified scuba diver, free diver and about to receive his certification in naval search and 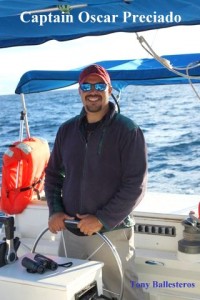 rescue operations. He is a veritable plethora of interesting facts that he imparts with animated, down to earth humor. His crewman, Alán Gutierrez, not only boasts ten years maritime experience, but hails from a family with several generations of commercial fishing experience.

The Tempo is a vessel with a colorful history of its own, well maintained by Oscar and 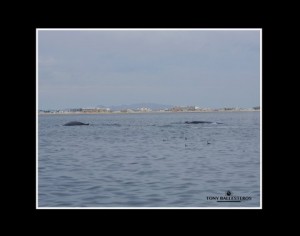 Alán, and  originally custom built for Ben Little, the drummer for Earth, Wind and Fire by the renowned craftsman, James Wharram, known for his quality boat construction techniques such as using pure teak wood hand cut and arched cross beams (4) capable of holding 90,000 pounds each. Below, the vessel sleeps six, has a state-of-the-art instrument galley, one head, a food prep galley and mess hall. The boat was purchased from Ben Little by current owner, Craig Kurth.

Even though the Tempo will accommodate 18 passengers, ( including Margaritas!), 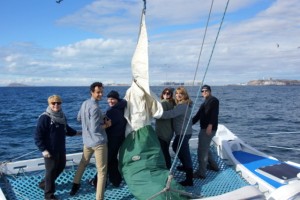 Oscar, as passionate about whale watching as anyone, will make a trip with as few as 5 people. In addition to his trip designed especially to find whales playing, he does a lot of day trips departing at noon and running for about three hours. He also takes sunset cruises departing at 3:00 PM (depending on the season, of course). His whale watching trips leave at 1:00PM and are planned for three hours—but if the whales and passengers are having fun, don’t worry about Oscar leaving them just because of the time!