Jerry Cáñez was born with a passion for quality and service and knew his career was to be in the food and beverage business from an early age.  Even though his love of the service industry came naturally, Jerry worked hard to earn his expertise in the culinary 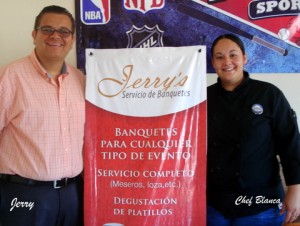 arts, restaurant management and organization, as well as the specialized fields of banquets and weddings.  In fact, if you attended the Sonoran Resorts 3rd Annual Las Vegas Night for Charity on July 5th  of this year, you’re already familiar with Jerry’s ability to put on a delicious buffet as he catered that affair.

In 2005, Román Gerardo (Jerry) Cáñez Méndez earned his “Licenciatura”  in Administration of Tourism Enterprises from the Centro de Estudios Superiores Del Estado de Sonora in Hermosillo specializing in Food and Beverage. Adding a strong foundation to his credentials, Jerry had worked full time the entire four years at Appleby’s, starting as a dishwasher and rising through the ranks to eventually manage the entire restaurant.

When you meet Jerry (if you don’t know him already), you’ll understand immediately that he is doing what he loves and, through education and experience, has built an arsenal of “back of the house” detail and creative ideas to share with his clients for catering unique banquet and wedding events.

Born and raised in Caborca,  after earning his Licenciatura , Jerry moved to Puerto Peñasco in 2005 to carve out his own little slice of paradise by the sea becoming the General Manager of the  Sonoran Resorts three restaurants located in the beach front Sonoran Sea (Martin’s), Sonoran Sun (Catorce) and Sonoran Sky (Ocean View) resort condominiums.  He developed, sold and serviced many weddings and special events at all  three locations.

In 2009, Jerry opened his own restaurant, Jerry’s Restaurant and Seafood, taking over the old Périco Marinero venue in the 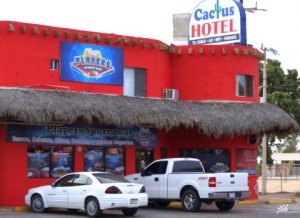 Malecón. As he continued to grow his banquet business, Jerry needed a larger area for food preparation and storage space.  At the beginning of 2012 Jerry 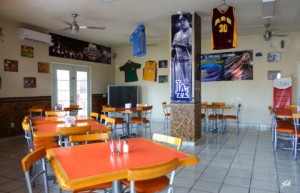 opened his current venue, Players Sports Bar on Benito Juarez in the red building about a block north of Burger King and on the same side of the boulevard.

Have you ever wondered where you might possibly find food around midnight or after? It happens a lot, especially when your friends come down to visit, or after a concert, recital, wedding, movie…you get the picture. Players is one of those traditional Mexican gathering places that fits into the “late night” niche, opening at 5:00 PM, and doesn’t close until 3:00 AM. But the best news is that the kitchen is open until 2:00 AM seven days a week!

It gets better. Let’s say you’ve got the midnight munchies but it’s so perfect out on the balcony with your friends—or just the two of you, that you don’t feel like fixing something, 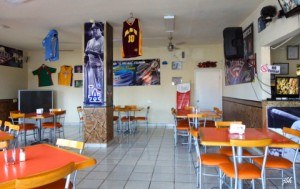 much less going out. Players will bring you anything on their menu such as your choice among seven different chicken wing (alitas) creations or five original house hamburgers. There’s also fried chicken in a basket, Caesar’s Salad, Players’ fried potatoes, or bakers stuffed with cheese and bacon.  Just call them from your condo phone at 383-6565.

Planning a special event? Use Jerry’s 10 years of  banquet and catering experience for your next wedding, anniversary, even a small cocktail party. He’ll assist you with planning it as well. To help you plan the best event possible Jerry doesn’t charge you for a menu tasting. Learn more by visiting Jerry’s Banquet web site at www.jerrysbanquetes.com. You can also call Jerry at 638-115-0983, or email him at jerrycanez@hotmail.com.