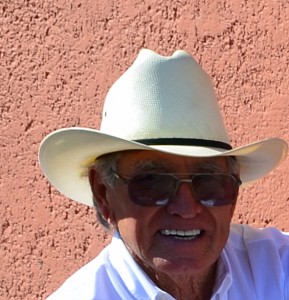 When Roman Candelaria heard about more than one child injury from bursting through the clear glass patio doors on ground floor condominium units, he realized that it could be just a matter of time until a child suffered fatal lacerations. As president of the Sonoran Spa Resort Condominium HOA, he was in a position to do something about it, at least at the Spa.

With the blessings of the Sonoran Administration, Roman began research on dealing with the reality that children in their height of excitement to get to the beach will not notice the stickers on the glass doors indicating they are closed.  Therefore preventing collisions with the doors was not a solution; leaving the search for a way to make the collision less dangerous for the child. This led to the shatter-proof film, similar, but stronger than window tinting material used on cars.

In fact the film Roman located claimed to prevent the glass from breaking into pieces even when an entire pane was shattered. He thought this would be great for those upper floor patio doors that had been subject to being blown out during the high winds that have taken place a couple of times over the last few years along Sandy Beach.

Roman wanted to see firsthand how effective this film would be and got a hold of a large pane of the same glass as is used in the patio doors at the Spa. He had the film installed on the pane and  prepared to test its protective properties using a two by four and bashing the glass pane as hard as he could.  The objective was to break the glass and see if it would shatter in loose pieces.  It turned out that the 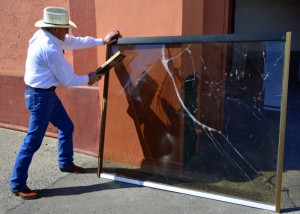 film actually made the glass pane stronger and proved impossible to break using the two by four.  Next, Roman and the head of maintenance decided to throw the pane into the parking lot to break it in order to see if it would shatter. They heaved it several feet into the air and several yards away crashing it into the parking lot surface. It still didn’t break. This was getting ridiculous, they thought. This pane without the film would be in a million pieces all over the parking lot after slinging it the way they had.

Finally, Roman figured he would have to pound the full weight of the glass on a sharp surface that would cause it to twist on impact. So they slammed it down on a large rock with the impact aimed at the middle of the glass pane. That accomplished the mission of cracking the glass. Plus, the claim that the glass would not shatter into loose pieces proved absolutely true. Now Roman had a proven solution to present to the next owners meeting. 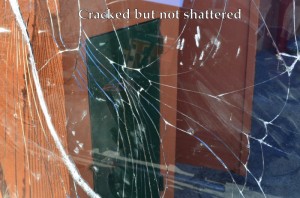 After his demonstration at the owners’ meeting, over a dozen chose to install the film on their patio doors and all agreed it was a great idea. That could have been because Roman had also negotiated a bulk price for the film and a volume installation discount with a quality installer. He had also received a positive statement from a local insurance company that they would consider a discount for owners who had installed the film.

If you know Roman Candelaria, you know him as a hands-on type of leader who is alert and sensitive to problematic issues from the early stages and many times before they become problematic. He was one of the first owners at the Spa and at the Sea. He has served on the board at both properties, elected as President of the Spa HOA in 2010.

He and his wife of 30 years, Gerrie, have been coming down to Puerto Peñasco for 15 years, traveling between their home in Phoenix and their ranch in Concho, Arizona. Roman is retired from his asphalt paving company which he sold to his son, and is a third generation rancher in Concho.