RCPM have quite a following of good to great musicians who love to jam with any or all of the band members, which is why they have little or no trouble bringing us evening after evening of rock surprises during each of their three annual visits to our little slice of paradise by the sea. 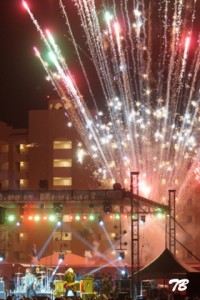 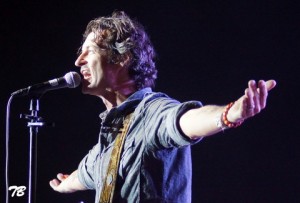 of both the “January Jam” as well as Circus Mexicus, held the first part of June, which also serves as the unofficial opening of Puerto Peñasco’s entry into the hot summer months by the Sea of Cortez. Whether we’ve heard the band’s name or not, we know they’re gonna be laying down some terrific rock sounds.

Circus Mexicus 2014, held June 5-8, as in years before, more than filled our expectations and kept us anticipating the next schedule of events, which this year was a four day music festival with the longest lineup of foot stomping, hand clapping, body moving rock music makers ever—10 acts, 13 performances that began Thursday night at JJ’s Cantina, then Friday and Saturday nights to crowds of thousands at the specially graded ‘bring your own lawn chairs’ amphitheatre across from newly christened Banditos cantina, and all 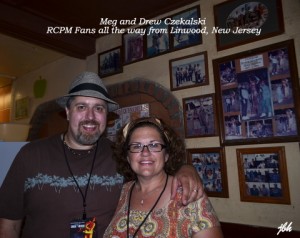 out at JJ’s, where it seemed everyone from Saturday night’s main event spilled right back into the Cholla Bay landmark for PH Naffah’s annual Hot Dog and a Smile charity event.

While the guitar jams were as awesome as always, there were several 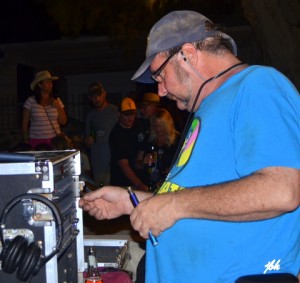 recordings. It helped that the ever-solid RCPM sound engineer, Jim Coleman, was on his A game, as usual, to maximize the quality permeating across two and a half

acres of fans, who were on their feet for most of  the Friday and Saturday night concerts held in Banditos Amphitheater.

One of the great things about Circus Mexicus is the way it starts off  boldly kicking rock and roll butt and goes perpetually upward from there. 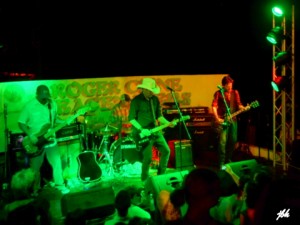 Dalton Gang, who, by any other name (“Law Breakers”, and others) sound as sweet when friends Johnny Hickman  (Cracker) and RCPM’s own Jim Dalton, Nick Scropos and PH Naffah get together to spread their country love well into the wee hours of Friday morn.

Friday night this year was headlined by classic gold album makers, Cracker, who showed the crowd why they have so many hits under their belts and created a virtual “hard act to follow” for the Saturday night show. They had apparently taken a break from their tour to have some fun in the sun and jam with their old friends, RCPM and Shurman. The Friday show led off with Shurman followed by The Sand Rubies, superbly 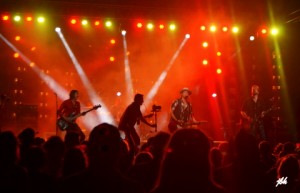 ing the resorts surrounding the Banditos Amphitheater.  But it didn’t stop the music as Cracker flaunted their stuff until well past midnight.

Saturday night, the main event, the grand gig, the moment anticipated by a Peacemakers throng more than 4,000 strong, 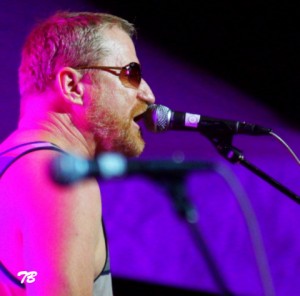 was opened by The Black Moods out of Phoenix. It was their first Circus Mexicus as a whole band (Josh Kennedy came down last year) who proved more than worthy to follow the

killer Friday night show.  Not only because of Josh Kennedy’s showmanship, lead vocals and awesome riffs along with the backup vocals from bassist Ryan Prier and hauntingly consistent beat of drummer Danny “Chico” Diaz, these guys make you ask, “How long have they been playing together? They are tight!”  Since 2003 is the answer. Josh got his start as 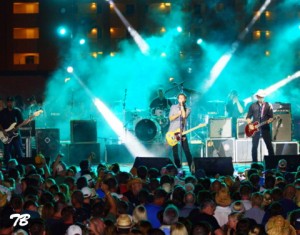 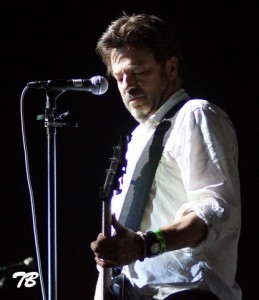 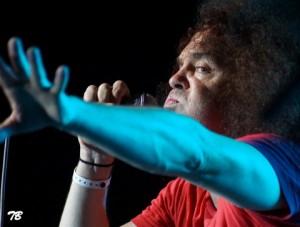 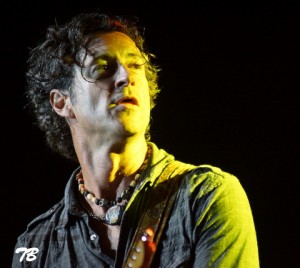 to watch and their music puts you into the classic rock zone where they can keep you as long as they want. 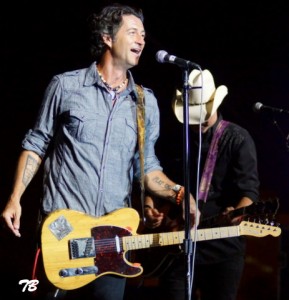 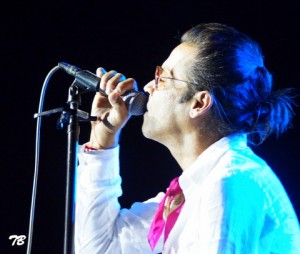 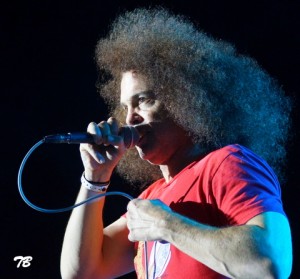 As good—make that great—as all the bands were, it was clear that they all looked up to Roger Clyne, and had been for most of their careers. But never has such admiration by musicians for another musician been made so obvious as it was Saturday night when, moments after a rowdy moonshine welcome by Roger, he stepped back up on the stage toward the mic and announced that just moments before, during his welcoming toast, he had injured his voice. Showing a true desire to stay honest with his Peacemaker fans he explained that, with a little help from his friends, he could still keep his promise to give everyone at least four hours of high energy rock and roll. What proceeded from that point was the making of a hero in the eyes of the thousands of adoring fans who watched and listened as Roger gave 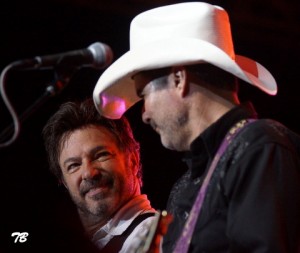 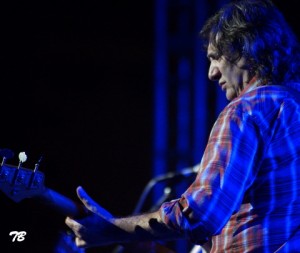 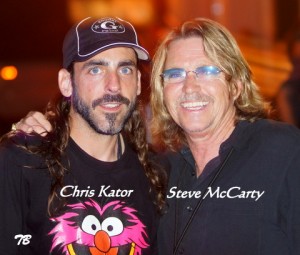 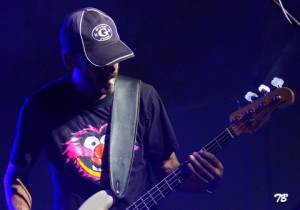 his all a couple of songs at a time throughout the evening interspersed by the highly motivated friends who literally lined up back stage to perform while he gave his voice a break. In fact there were so many of his musician friends willing to perform that there was no time for all of th

em. Even the great Steve McCarty (former Steve Miller Band singer/multi-platinum songwriter) was back stage and willing to step forward in support of Roger if needed.

If they gave awards for this kind of musical heroics, right after Roger, Jim, PH and Nick, RCPM stage manager/instrument tech, Chris Kator, should be a recipient as he and travelling crew member and musician, Jason Boots, literally buzzed through the equipment setup between impromptu decisions of who would be performing next accord

ing to the makeshift set list. Watching Chris taking care of every detail with just minutes to keep the 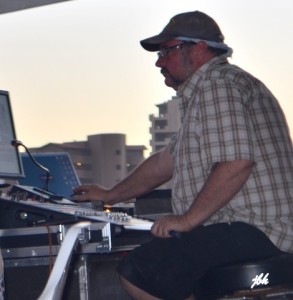 show flowing was a remarkable experience. Another award for heroics should go to sound engineer Jim Coleman who had to constantly adjust the master console for the diverse voice and instrument output as it happened.

And while we’re recognizing those behind-the-scenes troopers (who, by the way, don’t hold back their super powers just for

dealing with potentially devastating obstacles) who

make up the organization that runs so smoothly for us, we must include merchandise manager, Chris Moda and his team. He handled over 3,000

will calls and ticket sales over the weekend, plus his team handled all the drink ticket sales, and the fantastic RCPM goodies at the gift shops.   Then there’s the unsung

head honcho of Circus Mexicus, Greg Ross who can be found in two places at once throughout any day or night of any Circus Mexicus ever held.

It was truly a combination of expertise, talent, dedication, friendship, commitment and desire that brought the Peacemaker fans to their feet so often throughout that miraculous Saturday evening.

Maybe that’s why a shoulder to shoulder crowd of appreciative Peacemakers joined the Sunday Hot Dog and a Smile charity cook out hosted every year by PH Naffah at JJ’s Cantina in Cholla Bay—along with non-stop rock and roll by six bands a-jammin’ ‘til well after sunset. 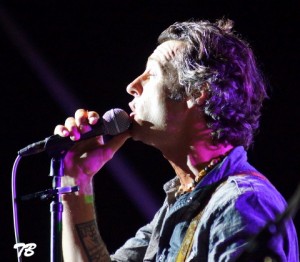 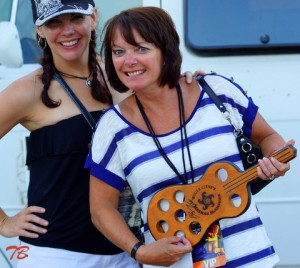 Leaving us with so many reasons to anticipate next June, Circus Mexicus 2014 is a wrap!