Infrastructure in and around Puerto Peñasco will take on more importance as the projected completion dates for the home port construction phases become more predictable. There are at least three phases to the home port

construction project and we are still waiting for start dates on two of them, so completion dates are impossible to project.  After the pier reaches the planned length then construction of the docks will begin. That phase is under separate federal 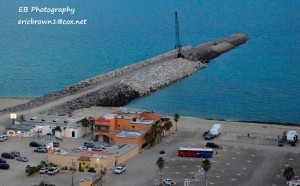 contract with another company. The terminal construction is under another federal contract with yet another company.  Until we are quite a bit further along, and the new administration gets settled in and begins to reveal their position on creating the overall infrastructure there are just too many pieces of the home port puzzle not connected to think about priorities. It took all the foregoing to justify an opinion that we have reached a lull in our series which could last through summer. 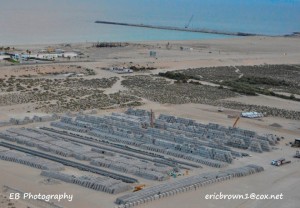 Therefore, with the splendid photography of Eric Brown, we will follow

progress of the home port letting his pictures speak their “thousand words”.  We will also stay in close contact with our friend and pier construction project administrator, Wendy Winzer for any new information she can provide.

Of course, we will continue to attempt making headway into the new city administration, specifically the Mayor’s office to learn what we can as to how they are thinking in terms of launching infrastructure activity.

Let’s take a walk, no matter how brief

Our walk with Wendy this month was indeed a short one with limited new information, though she did share all she had with enthusiasm.

Last month she had reported that to date through May they had poured 20,000 small one ton cubes and 4,500 large 10 ton cubes. They had placed 7,400 small cubes and 1,800 large cubes on the jetty (pier). Thanks to their increase to six giant cranes last month which are strategically placed from the pier to the cube field, the ability to place cubes on the pier will increase.

Inclement weather last month hindered progress on lengthening the pier which was at 630 meters by month’s end. They were still able to continue building up the east side with 10 ton cubes to protect the

“As it stands we have still added 50 meters in length to the pier, bringing it to 680 meters,” reported Wendy.

Installation of the on site concrete plant adjacent to the cube field increased their capability to pour more cubes each day. This month  they have averaged pouring 300 small (one ton) cubes and 100 large (10 ton) cubes daily and have successfully tried to place the same amount on the pier each day.

Wendy said, “We continue to dump rock from the quarry

, slowly but steady, and are  looking into new screening machinery that should accelerate the process.”

She also added, “Regarding the new elections, funding for the project is from the federal government and is given to the state government to administer. They will now be of the same party, so I assume things will go smoothly with the monies for the next year.”

We look forward to hearing from Wendy further during July.  We also thank Eric Brown (EB Photography) for his historically important photographic journaling of the home port construction progress.