In Part IV of our Impact study, we defined some areas of infrastructure needed to accommodate the cruise passenger market that aren’t as obvious as those normally envisioned. We discussed how simple the formula is that cruise lines

themselves have been using for 40 years that is credited as crucial to their phenomenal growth over that period. It has to do with spoiling (not just satisfying) the passenger. This simple philosophy has virtually guaranteed the cruise lines a passenger loyalty base that has stretched through generations of families, each generation taking more cruises than the last one.

So, how do we spoil our visitors? Using the questionnaire format the same way the cruise lines have been doing for four decades: 1.) Ask and listen to the answers; and 2.) Give them more than they asked for. Just one example of giving more than they ask for is illustrated perfectly by Carnival Cruise Lines recent discovery (through questionnaires) that passengers traveling with family wanted water slides for their kids. Carnival didn’t  just add a water slide to their pools. They added a water slide that took kids through flowing water that spanned four or more decks at a cost of millions of dollars! Spoiled? You bet. 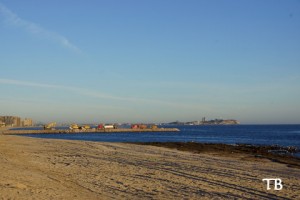 How do we garner information from our cruise visitors with questionnaires? A recent study of how cruise passengers to Hamburg, Germany were interviewed to gather such marketing information revealed that very effective booths manned by volunteers were bustling as the passengers debarked for a day visit and were handed an assortment of brochures and maps to help them navigate around the city. However, when the passengers returned to the ship at the end of their visit, the booths were closed. Unmanned. So there was no exit interviews to determine if the information they were handed actually helped! This illustrates the importance of careful planning when executing service concepts like these. We can learn from these types of studies, of course.

In PART VI next month we’ll continue more in-depth examples of how known habits are exploited by asking and listening to our visitors.

Let’s take a walk with home port project Administrative Director, Wendy Winzer, to get the latest on the very visible slow down (O.K., halt) in construction …

In our last walk down by the Pier, we learned and reported in Part IV that there were two main issues causing delays in the 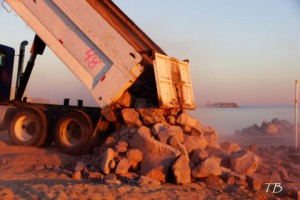 overall project. While the dynamite permits were all issued after a delay, the actual blasting did not produce the required size of rocks to continue construction and they had to return to the drawing board and plan another blast date. The second blasting took place on May 19th producing the correct size rocks, thus solving this issue for awhile. During this exercise, the geologists discovered that Black Mountain quarry would not be able provide sufficient tonnage of the very large rocks of the three sizes needed build the pier. They are now studying  various ways of acquiring those rocks. One of the ways is to actually cast them out of concrete using the smaller stones from the original blast to fill and shape the castings so allow water 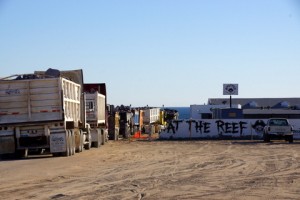 flow and settlement needed as with natural stones. We’ll keep you updated on that as it develops.

Meantime, back at the union farm (dare we say asylum?) there is a confounding issue with the invoicing by the union. It seems that each truck upon being loaded at the quarry receives a two part receipt-like form which the driver carries to the weigh station located just before reaching the pier. There he enters the weight (this is for statistical purposes), dumps the rocks and turns over one copy of the form to a collector of forms (?) who in turn delivers them to the construction office which is actually one end of a small trailer, the other end of which is Wendy’s office. The trucker then turns in his copy of that form to someone at the union contractor’s office to substantiate his pay.

When the project began, the general contractor, per agreement, paid an upfront sum to cover the estimated maximum amount of truck deliveries for an agreed upon time. When it came time for the union contractor to substantiate that 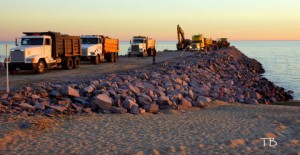 payment with invoices backed up with those receipts, first the amount of the invoice was far more than could have possibly been delivered by the number of trucks, especially considering the delay caused by the blasting permits; and second, no receipts accompanied the invoice to show how they arrived at the invoice amount.

When asked about the receipts the general was told that they didn’t have any. None. But they still demanded on being paid the additional billing amount. Stalemate. Eventually, in fact, he just returned to Hermosillo last week, the head of the project, Director of Tourism for Sonora, Javier Tapia Camou spent last week in town trying to reach an understanding with the union contractor and creating a system that would keep this from happening again. He left believing they had an agreement. At the time of our meeting with Wendy (Friday May 30) no one had heard from the contractor.

Wendy assured us that with an aggressive work schedule they can still complete the project by the end of 2015. And includes taking into consideration some other good news involving the need to extend the pier so it reaches deeper water as requested by the cruise lines who would like to use larger ships than originally planned. Larger ships are trending in cruise industry nowadays because of demand and new design technology.

As always, We will deliver the facts about what’s happening with the home port project to you as we get them  along with any updates.