In Part II of our ongoing series about the impact our home port  will have on Puerto Peñasco, we established how and why the 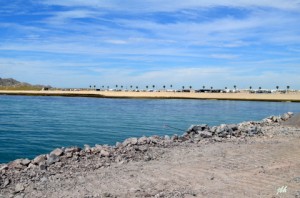 cruise passenger market is such a different breed of tourist than all the other segments in the industry, and how the cruise industry benefits from knowing more detail about their passengers’ cruise experience than any other provider of tourist services in the industry.

To summarize the cruise passenger mindset from what the industry has learned and on which the industry stays über current: A spoiled passenger is a satisfied passenger, which makes for a repeat passenger. Simple enough, right? The simple answer is, yes, it is a simple formula. Over the course of these impact studies, we’ll show examples of how crucial aspects of such a simple formula can be lost in the excitement and anticipation of all the obvious economic benefits that a cruise ship brings to destinations.

In order to sort of  “break into” how cruise passengers spend their money, let’s take just one area of interest where the expenditure 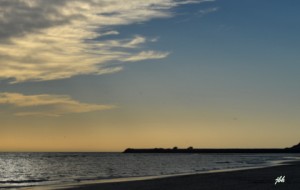 is significant even though the percentage of passengers purchasing is not that big.  To make it short and sweet, so to speak, cruise passengers spend and average of $40.34 on watches and jewelry—at homeports—during their cruise vacation. If you consider that represents only a 3.3% share of on shore visits, you can imagine the quality of watches these passengers are willing to consider purchasing. In fact, you can understand a little better why the main street of Nassau is lined with watch and jewelry stores. 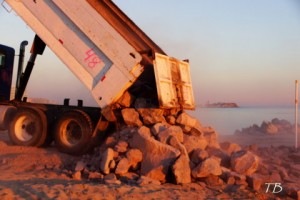 Are we prepared to have jewelry stores, watch sellers and the like stock such inventory? Are they willing to approach the government bodies with proposals of tax exemptions, import duty discounts for such demand items? These considerations are all part of infrastructure preparation, and part of the simple formula that is essential to bringing the passenger families back to our little slice of paradise by the sea for their land vacation.

Next month we’ll discuss more about expenditures and more about the land vacation habits of cruise passengers.

In our ongoing effort to keep the facts overshadowing the rumors, we go directly to the source for clarification of such tidbits as we hear them.

This month, besides the usual conjectures about workers not being paid, there were a couple, frankly so far out there, we won’t 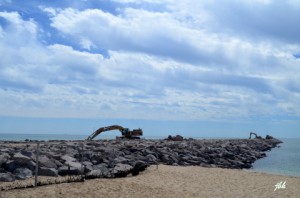 even go into detail other than just address the facts as answers.

First, as has been, all workers are paid. Don’t know why this one continues to circulate since all records of the money’s whereabouts is  public record, which show it being safely in the account of Cofetur-Apison, Sonora’s tourism financial administration body. In fact, that account not only contains 300 million pesos already transferred and assigned for part of the project’s 2014 budget, but also there is still money left from 2013 which will be spent on the project before May.

Who hasn’t noticed that the hustle and bustle of trucks buzzing back and forth  along the pier 12 hours a day has completely stopped. Maybe that is the source of the above rumor. 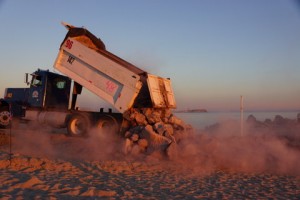 We addressed this last issue, and along with the contractors we are disappointed to say that the delay is purely because they ran out of rocks to dump into the sea. The permit for permission to purchase and transport the explosives to create more rocks was finally issued (first hurdle) and since, the issue has been to muster the troops (literally, the military must move explosives, no one else) to get the delivery done. The strategic holes in which the explosives must be placed to render the size of rocks needed (there are three different sizes that make up a pier structure that will only get stronger with age) have been cleared out and are waiting for the big bang stuff to be placed in them. They continue to expect the delivery any day, even as soon as this week. And don’t worry, you’ll know when it arrives. Did we say “big bang”?

Without going into much detail, there is an issue with the local transportation union (which is nothing new according to sources)

who feels they deserve the entire contract. However, two contracts were issued by the state to insure enough trucks and drivers to carry on such an aggressive work schedule. Since there are no rocks to deliver, delays are minimal, and the government is involved in negotiating with the unions.  We promise to keep everyone updated if this issue should scale up.

In the meantime, both government and contractors feel that the dynamite will go a long way toward smoothing out the labor union conflict.

Stay tuned for Part IV, or any updates on our blog between now and next month.