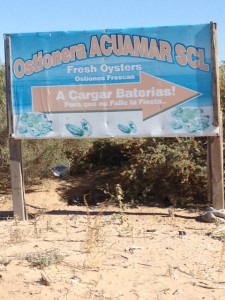 Oysters get a bad rap.  Understood by few, they are usually met with noses pointed north and that “eww, it’s raw” shortsightedness   In Penasco, they aren’t nearly celebrated as much as their neighbors, the shrimp, clams or fish.  If you have even a remote interest and a need to kill an hour during your next visit to Penasco, read on.

Currently there are three ostioneras (oyster farms) spread through the Morua Estuary located between Las Conchas and Playa Encanto.  All are accessible by any car (trucks and SUVs are best), but the easiest one I’ve found is Ostionera Acuamar which is just a few minutes outside of town.  Take Fremont Blvd to the Las Conchas turn off but keep going straight toward Caborca.  Between kilometer markers 4 and 5 you’ll see the faded painted sign which has stood the test of time.  Make a right for about ½ mile and veer to the left when you see the sign.

If you’re expecting Pike Place Market (Seattle, WA) to appear over the hill, you’re out of luck.  But what you will get is a firsthand look at how oysters are harvested in the Sea of Cortez.  After parking, a younger guy named Jorge walked up to me with rubber boots and introduced himself speaking English better than a lot of high school kids I know.  I asked him to show me around and he said no problem.  I got the feeling not a lot of people make the trip to his farm and instead rely on the seafood vendors on the Malecon to buy his product.

Jorge told me his farm alone seeds about 100,000 oysters every year.  Roughly 75% grow and are eventually harvested.  Yes, that’s 75,000!  There are hundreds of wood structures similar to shipping pallets stacked on top of one another sitting in shallow water.  As the oysters grow they are rotated enjoying both cool water and just the right amount of sunlight.  Jorge’s family times each harvest knowing when they’ll be ready to sell.  Each structure is kept out of the sand and allows the water to flush out debris like sand and other ocean floatables.  For those who have ever been stuck eating an oyster (or clam) that included even the smallest amount of sand, the texture is pretty nasty.  Ostionera Acuamar takes pride making sure that doesn’t happen to their oysters.

After looking around, I asked for  3 dozen to take back to town for dinner.  Jorge sold me them for $6 per dozen.  After seeing how long 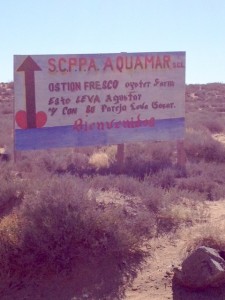 they take and how many people work on each harvest, I thought it was a bargain.  I asked for ice to keep them cold to prevent them from spoiling.  “No, no, no Senor!”, Jorge snapped at me.  He went on to tell me the WORST thing you can do is to expose them to either fresh water (even drops from melted ice) or extremely cold temperatures.  Still shaking his head, he told me some Americans have come back angry with stomach aches accusing him of not properly caring for his oysters.  Without fail, they go on to tell them how they went to great lengths to keep them ice cold.  As patiently as he can, Jorge has to tell them their attempt to keep them fresh actually backfired and killed the oysters by exposing them to fresh water and/or abnormally cold surroundings.  Dead oysters equals rotten oysters.

His suggestion for keeping oysters fresh is as follows.  Keep them in a dark and dry place like an insulated ice chest.  If traveling in the summer when it’s really hot, lay several layers of newspaper over the oysters and put bagged ice on top of the newspaper to keep them dry from condensation and insulated from the cold.  Once you get back to wherever your staying, remove the ice and just keep them inside.  He was very confident when telling me they will last 2-3 days without any problem if left in a dry, shaded place with moderate temperatures.

We grilled all 36 of them allowing the steam from within to pop open the shell.  Each shell had a perfectly shaped oyster inside without any fishy smell whatsoever.  A couple hits of hot sauce and a big slurp later, I found myself in a happy place.  I wash each down with a sip cold Modelo Especial and repeated several times.