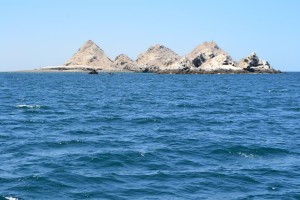 Some of those aboard were residents who regularly support Adopt-A-Classroom, and other charities; some came to Puerto Peñasco especially for this fundraising boat trip, which is one of two each year organized by Mark (Barb isn’t into boats like her Dive Master husband). One couple who came down for the event was Ron Alofs and Gina 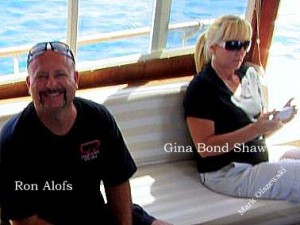 Bond Shaw.  Ron, an avid diver, has been coming to Rocky Point for nigh on 27 years now and has brought truckloads and trailer loads of school supplies and food over time so his friends, Mark and Barb, can deliver them to the appropriate charities.

While Adopt-A-Classroom is the charity Mark and Barb founded, through the years they haven’t limited their charity work to their own.  Not at all; over the years they have assisted countless charities in Puerto Peñasco and other towns, filling their needs as well.  You can read more about these two special people at https://www.sonoranresorts.mx/?p=4658 . 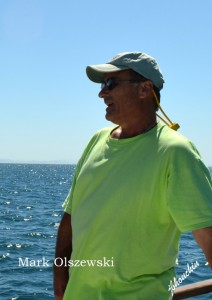 You see, Mark and Barb founded Adopt-A-Classroom nine years ago shortly after Barb dropped the young relative of a friend off at a small school and noticed that there was no plumbing and no running water in the entire school.  She also quickly noted that there were not enough school supplies, like paper, pencils, notebooks and such to go around. A good old rural Missouri gal like Barb couldn’t let that obvious void go without some attention paid to it.  Well, the rest of the story is a beautiful one of continued growth and expansion that now provides supplies and other needs for 9 schools and thousands of kids around the Puerto Peñasco area and one school in Puerto Lobos.

The ride over on the 54’  “About Time” with owner and captain, José Adolfo Perez León, was smooth 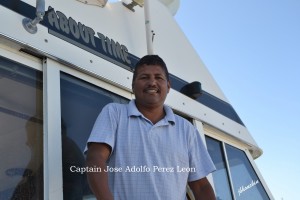 cruising across deep blue water with everyone enjoying the pleasant sunshine—not too hot—just right.  It seemed a short time before the outline of Bird Island rose above the horizon.  That was surely because the conversations were lively and interesting, kept that way by Mark leading others into stories of cruises past, dives, rare sightings, adventures. 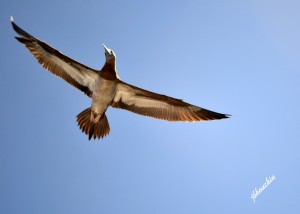 Little did anyone know what fortune lay moments ahead as we neared the rising rocks of the island with sea lion bulls bellowing their warnings to potential intruders who might be even thinking of encroaching on their harems. Yearlings frolicked all around. A couple of smaller boats and hookah pangas passed as we neared even shallower water where Captain José was looking for a quiet spot to drop anchor.  That’s when a small cruiser passed close by and the pilot hollered that there was a whale shark just ahead.

Excitement filtered rapidly through everyone aboard our ship and all eyes were forward. Ron made the first of a couple of profound comments he was to make on the day. “I wonder if it’s big enough to hitch a ride with? I’ve always wanted to do that but never had the chance!” No sooner had he asked than we saw the spotted giant swimming just under the surface in about 20’ of emerald green water. 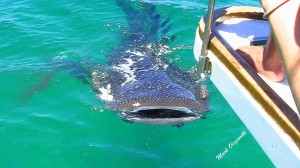 He was easily 25’ in length, completely fearless and totally curious.  In fact he turned toward the bow and swam right up under the pulpit for a photo op; opened his huge wide mouth as if to say “Jump in, the water’s fine!”

No one needed a second invitation!  Within minutes kayaks were floating, snorkels were positioned and at least a dozen humans were swimming within yards of the big fella. The brave, more experienced among the group, namely Mark and Ron, swam directly toward our new friend who was swimming 30 yards around the boat. That’s 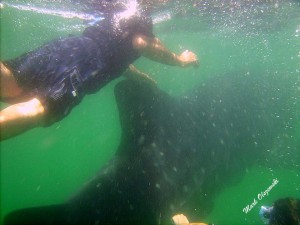 Ron in the photo grasping the dorsal fin for the ride he always wanted and Mark is taking the photos with his underwater camera, a rare adventure for him as well.

Needless to say the encounter with this whale shark was a great experience for everyone on board, and an adventure of a life time for about a dozen of us. Ron Alofs’ great sense of humor had him joking about how he would now be able to “one up” all his friends when they start talking about their adventures—and he’s got the pictures to prove it!

It truly was a “Karma” thing, this trip.  A deserving group of generous folks who together raised $800 for Adopt-A-Classroom and were blessed with an adventure few get to experience.  It was a win-win situation for sure.