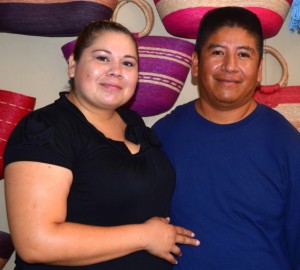 the patriarch of the Belén Perez Nahuatl family of basket weavers. Those daily climbs, as grueling as they were, would always be an adventure to Manuel and a pleasing memory to him even now because it represents the beginning of a life long journey learning the ancient art of basket weaving. 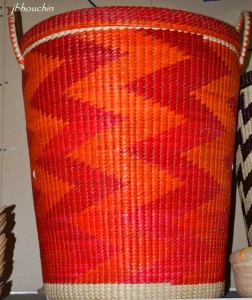 the Spanish conquest in the 1500’s when indigenous Aztec tribal populations (actually called ‘families’ rather than tribes) scattered to the mountain sides in fear of Spanish leader, Hernan Cortés and reestablished their way of life in the isolation and protection of the rugged mountainous regions in the Mexican state of Guerrero. Over a million Nahuatl descendants of the Aztec culture still speak the native language, also called Nahuatl. It is the most spoken besides Spanish of the 68 indigenous national languages in this ever-wondrous country of color and lore. 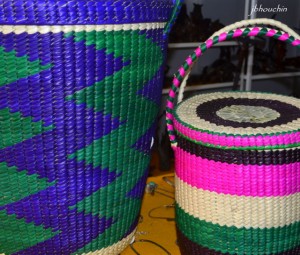 Most of the other indigenous languages, which cover the gamut of ancient Indian cultures, some spoken by only hundreds of natives, some with less than 30 speakers, but nonetheless, regarded and respected as an official national language enjoying the same rights as Spanish, obviously the most spoken language in Mexico. 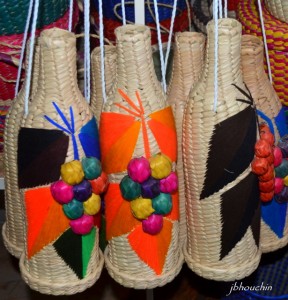 Tlamacazapa (pronounced: Tlah-mah-kah-zah-pah) and was learning how to cut and harvest the highest quality palm fronds that make some of the strongest, prettiest and most detailed baskets in the world. Manuel learned how to cut the leaves just right so that they would grow back and be ready to cut again and again—but only, his grandfather taught him, if they were cut the right way each time. When grandfather had cut enough palms to fill his carrying pouch to the limit of both volume and weight, he cut a few more and bound them into a miniature pouch and strapped it across Manuel’s forehead so he could learn how to maintain his balance while negotiating the steep rocky trails back down to the pueblo. 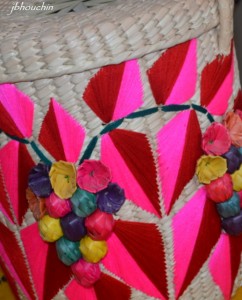 The pueblo women take the palms from there and proceed through the process of drying, which involves different times for different palms. The green leaves must dry for three to five days and the leaves that are going be dyed must be boiled in water

and cooked for ten minutes then laid out to dry for two days. To give the Nahuatl baskets their unique bright colors, those leaves are then boiled in herbal dyes of many different colors. Only after this meticulous process is followed precisely are the palms ready for weaving.

The time it takes to weave a basket is dependent on the size.  A small basket can take a full day to complete, and a close look at the perfection of the weaving and strength of the basket explains why. Just think of how long it must take to weave a basket three feet tall 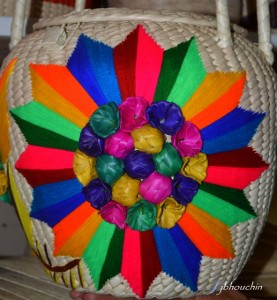 and 2 feet wide with beautiful colors woven into it from bottom to top, and then flowers or other native designs laced upon it with bright threads and precision art.

Manuel grew up in an ancient civilization that exists today. Tlamacazapa 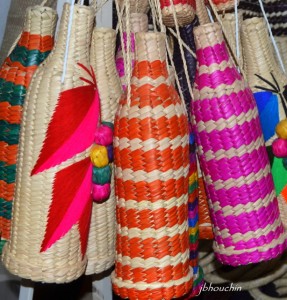 (bet you can’t say that three times),  a mountainside pueblo with no running water, little electricity, wood stoves, diets of tortillas (corn), salt, and sometimes cheese and salsa.  The town’s only economic income is from basket weaving, so you know they understand how important beauty, quality, and functionality are to their survival.

As a curious kid growing up, Manuel learned all the phases of basket weaving from his mother and sister. He learned the art of threading designs onto the baskets from his father. By the time he was ready to go out into the modern world from the pueblo to sell his family’s baskets, Manuel was an expert in the whole art of basket weaving which would contribute to his success in sales. He took off for Querétaro eventually living in Zihuatanejo for a few 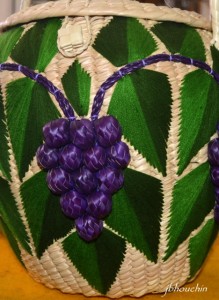 years and sending money home to the pueblo from his basket sales. His mother was happy to make more baskets for her son. 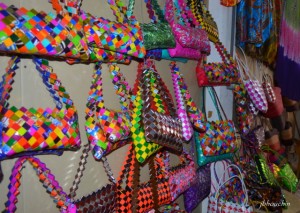 When Manuel’s brother, along with his father, discovered Puerto Peñasco he beckoned his sibling to join them. Manuel did just that in 1995 and began selling his mother’s baskets along the beach. Good things continued for Manuel after relocating to Puerto Peñasco. He met his wife, Claudia here and he opened his own shop on Cholla Mall. He still sells his mother’s hand woven palm baskets as they arrive from Tlamacazapa. To some his father adds his unique and colorful long thread stitching which he applies to the baskets after they arrive in Rocky Point.  Manuel’s mother still prefers to live the simplistic life of their Nahuatl ancestors with none of even the most basic of 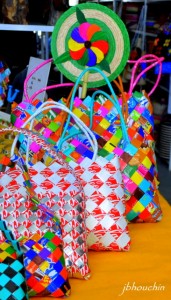 modern conveniences. She does visit the boys and their father occasionally, and after only a few days, the stressful, bustling lifestyle of Rocky Point makes her homesick to return to the peace of her pueblo.

Manuel and Claudia run their store on the Cholla Mall road called “Manuel’s Place”.  You’ll miss the sign from the road so just go to the second store east of the corner of Pino Suarez and 32nd on the north side.  In addition to the authentic Nahuatl palm woven baskets, Manuel offers a 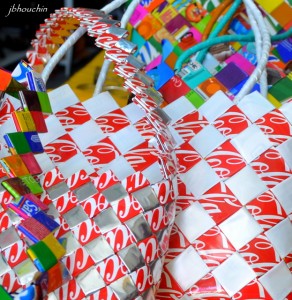 wide selection of detailed iron wood carvings from the most experienced carvers in Sonora.  He also offers a bountiful choice of colorful woven “candy wrapper” purses and accessories (including billfolds, guys), that are currently trending among the ecologically aware on our planet. These products are woven from recycled labels from candies, sweets and soda bottles, even Coca Cola, which you will not find in the U.S. for obvious legal reasons, and with the same attention to detail, creative design, strength and durability as the internationally acclaimed Nahuatl baskets in Manuel’s Place. 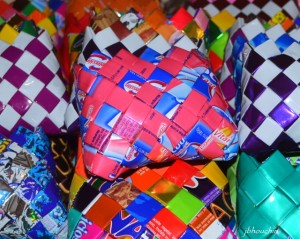 It will be worth your trip to Manuel’s Place just to see the quality and creativity of the baskets and candy wrapper items. Both Manuel and Claudia speak a fair amount of English and are very personable and service oriented. You may even see Manuel on the beach during busy weekends. You’ll recognize him, the one with the most beautiful baskets you’ve seen…and he may even be packing a few candy wrapper purses as well.

It’s a blessing that the small artisans of our little slice of paradise by the sea have survived the worst of the world economic downturn. Now that things are picking up a bit for most of us, it’s time to renew our familiarity with the art and craft that have expressed the color and culture of Mexico for centuries.

You can start with Manuel and Claudia at Cholla Mall. They won’t mind!

This blog is powered by www.sonoranresorts.com, Jim Ringquist, Director of  Sales and Marketing.