As they’ve done every Christmas holiday season since the early 2000’s, the non-profit group of incredibly generous volunteer families 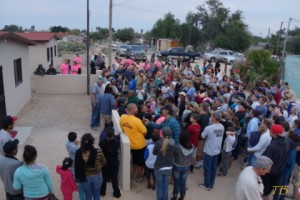 has put their hearts and souls into building complete homes in Puerto Peñasco and presenting them to deserving families selected from applications by needy familial enclaves who heretofore lived in totally impoverished shanties making the best of what they had.

Since 2001 Families Helping Families a registered non-profit organization in the U.S.

in conjunction with their Mexican non-profit affiliate, Casas Perpetuales, made up of role model parents and their devoted off spring, mostly of the Mormon faith from Utah, Arizona and surrounding states, have built about 30 homes in Puerto Peñasco.

Even more astounding is the miracle of how these organizations have selflessly worked with so many other entities to accomplish home building feats you might not believe if they weren’t documented in chronological pictorials that show how groups of up to 200 young people can work together (under the professional tutelage of equally dedicated, faithful and experienced construction and project management executives) to build three concrete block homes  foundation up in four days flat (that is correct, four days, and we’ll give you a link to see it for

yourselves later in this story!)

We’ve written about these beautiful people before, but today’s blog is about just two of the families to whom homes were presented over the last weekend of December closing out the year 2013. 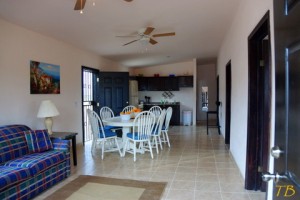 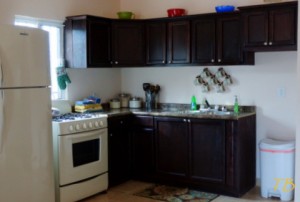 Two recently completed homes, including all furnishings and appliances, right down to toys and clothing were 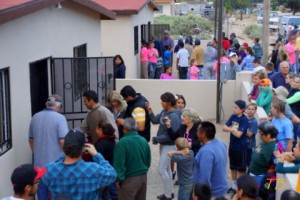 presented to two deeply appreciative destitute families, thus changing their lives for the better, forever. Amidst the cheers of more than 150 volunteers most of who had participated in building these homes, keys were awarded to Ignacio and Guadalupe Encinas and their seven children, and Flavio and Marlin Corral and their four children. Pictures are worth a thousand words, they say, and in this case, they may be worth even more…. 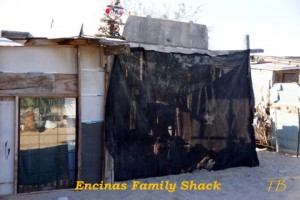 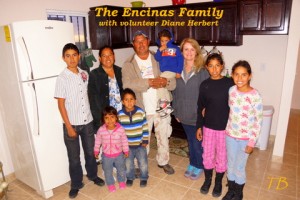 family grew to seven children: Rubin 15, Andrés 13, Cristina 12, Ana 10, Bella 7, Ignacio 5, and Avilena 3. Only recently the federal railroad department had notified all residents of this long row of plywood and cardboard shanty dwellings that the entire area would be leveled and they would have to vacate the premises by the end of January of 2014. The surprise and overwhelming relief of Ignacio and Guadalupe upon hearing that their application had been accepted for one of the new homes cannot be over emphasized. 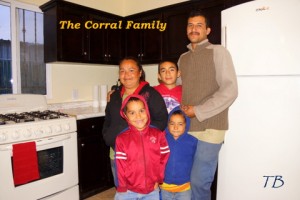 In the case of the Corral family, Flavio, Marlin, Angel 11, Sergio 7, Juan 4, and baby Zoe Camilla just three months old, the blessing of 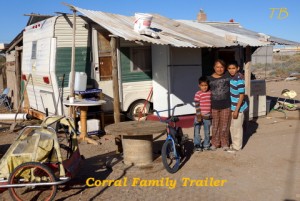 this new home took them from an undersized old dilapidated trailer Flavio had found and moved everyone into just for protection from the elements (photos). Imagine their surprise and happiness upon realizing the gift of a new home culminated their holiday season to offer them a chance at a new start on life.

Words can’t do justice to the goodness of the people behind such benign deeds as changing the lives of those in need, but we’ve tried on previous occasions, such as in our blog at https://www.sonoranresorts.mx/?p=5132, which we promised you at the beginning of this article.

These benevolent folks embody the Christmas Spirit, the power of faith, the true value of charity and the real meaning of “Service above Self”.