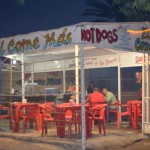 You see them up and down the streets of Puerto Peñasco beginning about sunset every day; from the small portable carts with umbrella coverings to cage-like enclosures with tables, chairs, soft drink coolers and table service. The main menu item: Hot Dogs, or Hot Dogos, or Chili Dogos painted in large red letters across the front of the venue.

While there are surely good ones all around town, the one we’re featuring in today’s blog is the El Come Más Chile Dogo and Taco Eatery located just east of Benito Juarez where Sinaloa and Lázaro Cardenas meet behind the big Pemex station that’s located south of the baseball stadium. 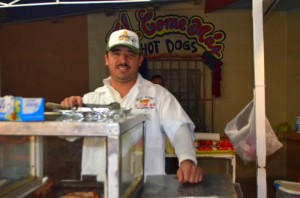 El Come Más ( The Eat More “Eatery”) is owned by Bartolomé Moreno Moreno (nicknamed Bimbo—after the Mexican bread company, not the connotation used in the U.S)  who has been there for 12 years and runs it himself from 6pm until 4am every day.  He employs at least four others who serve and run the taco stand located right on the street, all part of his operation. As far as street food businesses go, Bimbo has a large operation. 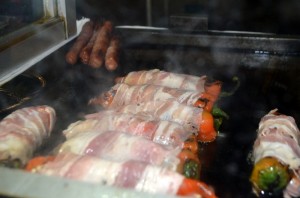 Easily the most popular item on his menu is his special “Chili Dogo”,  a hot dog weenie sliced down the middle and stuffed with cheese and ham, then wrapped inside a California Chili Pepper (the mild kind), and then wrapped in bacon strips and grilled to perfection, placed inside a super fresh bun and then the fun begins. You get to choose from over a dozen different toppings (in addition to mayo, ketchup and mustard) that include such morsels as mushrooms, chopped 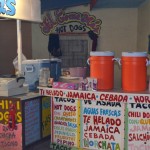 cucumber salad, salsas, three kinds of cheeses, pickles, relish, guacamole, grilled unions, chopped onions, chopped tomatoes, an assortment of one, two and three alarm chiles, just to name some of what’s available. The bottom line is you can’t eat just one of Bimbo’s Chili Dogos, but you may not be able to hold two of them, so just split the second one with your dining partner. He doesn’t mind a bit. 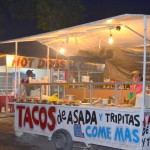 On Mondays and Wednesdays Bimbo features his “Salchipapas” which are French fries topped with cheese and chopped hot dog weenies with all the toppings you can choose from. There’s a large assortment of non-alcoholic traditional Mexican beverages to choose from as well as Cokes and Sprite. If you’re in the mood for tacos, you have a great selection in his cart on the street.

Next time you can’t decide what you’d like for dinner, or if you’re coming back from a night out on the town with a case of the munchies, Bimbo’s El Come Más will be open with a choice of traditional foods to get you back to your resort in fine shape.