By Joe Houchin in Our Blog with 12 Comments 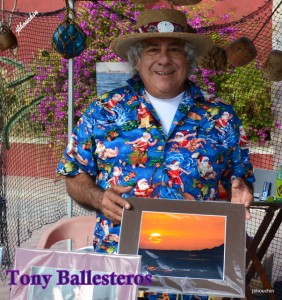 Born and raised in the historic Arizona border town of Douglas, Tony Ballesteros began his interest in photography in Douglas High School while taking printing class and serving as the school printer of the weekly Douglas High newspaper. Not satisfied with the photos being taken for the paper, rather than complain, the determined young Tony found a Brownie and started taking the photos himself with amazing success that began his life-long love and career in photography.

Tony joined the Navy in 1971 and took advantage of every relocation they chose for him to advance his skills as a photographer—from landscapes and people studies to bald eagles, crab boats, sea otters, whales…”and a lot of snow shots” in Alaska.

After the Navy, and 15 years as a Special Olympics coach, Tony returned to Douglas in 1992 and opened an antique store. This allowed him to actively buy, sell and collect cameras of all types as he continued to seriously advance his photography skills.

Tony discovered Puerto Peñasco in the mid-eighties and knew then where he was going to live when he retired.  He would travel to this quiet, pleasant little beach town every chance he got and camp on the beach.  In fact, his favorite camping spot on Sandy Beach was right where the Sonoran Spa and Sonoran Sea Resort Condominiums were built!  This was destiny to Tony and he purchased one of the first units sold at the Sonoran Spa and has lived here full time since 2005.

With his gregarious, fun personality and eclectic curiosity and interests, Tony has never met a stranger and has become a respected link with the workers, visitors, businesses and residents of this small community by the sea, all the while building his reputation as an accomplished photographer.  He’s come a long way from the Brownie he used in high school. 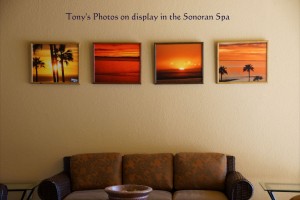 Since the first digital cameras, Tony has surged with the technology, now on his third Sony, the latest 24.3 megapixel SLR 650A that can fire 10 frames a second through a powerful telephoto zoom lens that makes most admirers astoundingly ask, “How’d he get that shot?”

In March of this year, Tony’s one of a kind photo entitled “Save the Dolphin” won the Sonoran Resorts “Why I Love Rocky Point” photo contest grand prize out of over 200 entries and over 7,000 votes.

You’ll find Tony’s photos hanging in the lobby of the Sonoran Spa and, along with his collection of rare corals and shells, available for purchase at most of the local craft and art shows at Tony’s “Timeless Treasures” exhibits.

Contact Tony Ballesteros by email at tonyballesteros2@msn.com or by local cell phone at: 638-386-1576.