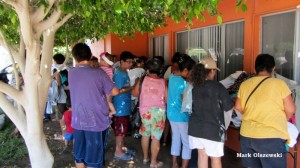 Rocky Point’s new wheel chair basketball team, Los Rolling Rockies, continued their fundraising activities on Thursday with a “Segunda” (in the U.S. it’s called a yard sale) in front of the DIF Physical Therapy Center here.  Mark and Barb Olszewski made available clothes they have collected through their loyal followers on Facebook, Rocky Point Talk, our own Sonoran Resorts web site Blog and monthly newsletter 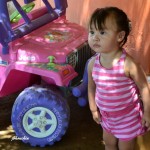 from our Director of Sales, Jim Ringquist, as well as from generous folks around town.

The Segunda sale idea evolved from trying to come up with a way to keep people from showing up and taking armfuls of clothes when they used to give them away for free. People would take items they didn’t need or that wouldn’t fit and leave nothing for the folks who showed up to the giveaways later. Mark figured that charging just 5 pesos for each item would make everyone more selective in grabbing the items and it was a small enough amount to be affordable to most. 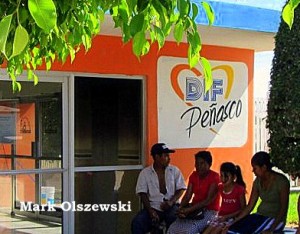 and Jesus Vasquez Sanchez; and team coach, Renato Molina. Since the team is actively raising money to prepare for their first season in the state wheel chair basketball league, the proceeds from the sales were earmarked for them. 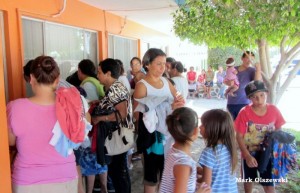 Turns out, the idea of charging a small token amount for the articles to control distribution was a great one.  A major boost came from the local AM 1390 radio station, “La Reina del Mar” who announced information about the Segunda all morning. Not only are they credited for the 30 or more people lined up at 9:00 AM to start shopping but several additional donations were delivered during the morning as well.  The most generous donation came from Ailano Partida whose small truck was filled with two bags of clothes, a box of shoes, two battery operated jeeps, a Barbie bicycle with training wheels, a toy car 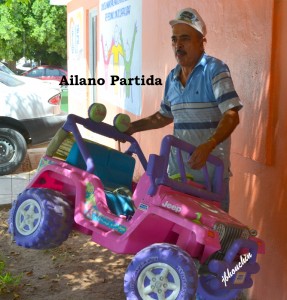 stroller and a tree swing with seat belt. Ailano owns and operates the hot dog stand that has been on the corner of Simón Morua and Josefa for 20 years and one of his long time employees, Ramón is handicapped.  When he heard the radio announcements and what the Segunda was all about he started loading up his truck. 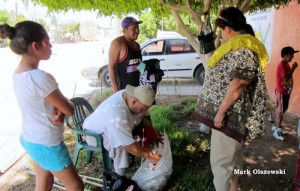 Most of the Rolling Rockies players plus Mark and Barb were on hand to assist the shoppers and keep the clothing articles somewhat orderly on the tables. After the initial rush the flow was still steady until almost noon and it seemed everyone left with several items and a smile on their face. Thus, not only do children of the local community have shoes and shirts and their parents have pants and shirts and skirts and blouses to wear, this effort raised nearly $1500 pesos for the new wheel chair basketball team—five pesos at a time! 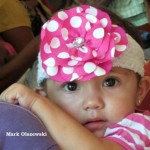 As the person spearheading the fundraising efforts for this and several other worthy charitable causes in Rocky Point, Mark Olszewski along with his wife, Barb, are ever grateful for the generous folks who continuously bring clothes, appliances, school supplies and other useful items, as well as monetary donations to entrust with Mark and Barb for distribution. Likewise, we at the Sonoran Resorts Sales Group Blog are more than happy to post articles like this to let you know your contributions are distributed wisely and effectively.