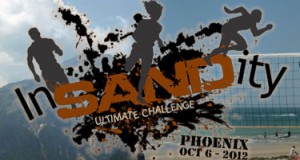 Luis Garrido of Outta Town Productions fame came to town over the weekend with his new wife, Karen to put together the logistics for their InSANDity! Ultimate Challenge to take place on the beach in front of the Sonoran Spa and Sonoran Sea Resorts on October 6 and 7, 2012. The InSANDity concept is taken from the wildly popular team building obstacle and challenge courses being attended by thousands of Americans every week throughout the U.S. Luis’ concept is unique because the course will be built entirely on the beach and will suitably challenge a family or group of friends of varying degrees of fitness.

You may know of Luis and Outta Town Productions for his legendary volleyball tournaments that have graced our beaches with gobs of gringos twice a year for nearly two decades. In case you don’t know of Luis and what he has contributed to the tourism picture in Puerto Peñasco, visit our story of last November at https://www.sonoranresorts.mx/?p=2367 . 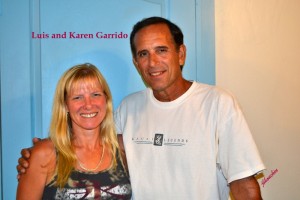 While here over the weekend, newlyweds Luis and Karen were able to measure the beach for the InSANDity course layout and narrow down the number of obstacles contained in the challenge to between 12 and15.  Some of the challenges will include the Vertical Cargo Net Climb, Balance Beams, 8 Foot Wall Climb, Low Crawl, Web Zone, Walking on Water, Pendulum Walk and half a dozen more to test your will and fortitude, all for the entry fee of just $45 dollars and early registrations (before September 6) will receive a commemorative T-shirt.  More details are available at www.InSANDity.net .  Check this site often for updates and for special rates at the Sonoran Spa and Sonoran Sea Resorts through RPR Reservations.

Outta Town Productions will still be handling some specific Beach Volley Ball Tournaments as well. Luis wanted to get the local restaurants and other businesses involved so he spoke with several who want to form their own volley ball teams for his next competition which will include a travelling trophy.  Details will be forthcoming on this blog. 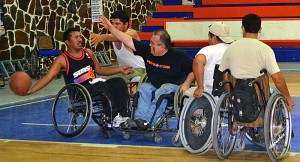 Luis is also legendary for his help with local charities over the years, and, as usual, Luis wanted to do something for some local charities this time as well. He met with Mark Olszewski and active fundraiser in his own right, who is helping the newly formed wheel chair basketball team in Peñasco “Los Rolling Rockies”. Mark has already found a couple of the special sports modified wheel chairs for the team, has raised $200 so far, including his own dollars, to help the team get to Navajoa later this month to play an exhibition match with the state league teams. 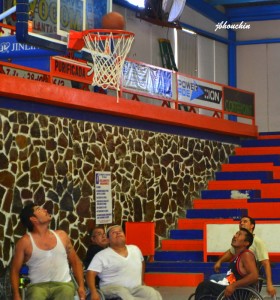 Luis ordered extra InSANDity! T-shirts and will donate all the profits to “Los Rolling Rockies” from those purchased by any restaurants for their staff to wear before the InSANDity! Challenge takes place in October. If you are a restaurant owner and would like to help “Los Rolling Rockies”, call or email Mark Olszewski on his cell at 638-109-1171 or email him at markbarb@prodigy.net.mx

And, as the old saying goes, “…Wait, there’s more!”. Luis also donated four gift certificates for free entries into the InSANDity Ultimate Challenge to our Las Vegas Night for Charity Gala Fundraiser for DIF next Saturday night.  You can use your winning chips to bid for these donations from Outta Town Productions.

This blog is brought to you by The Sonoran Resorts Sales Group, Jim Ringquist, Director of Sales and Marketing.