Holiboarding Is a Big Deal at Playa de Oro and Internationally!

are considered a skill-worthy competitor in the game called Holiboard (pronounced Holy-board). And there is no shortage of skill-worthy Holiboarders out at Playa de Oro. Stands to reason, though, because they’ve been playing this game for 29 years and have a giant tournament every February. This year there were 64 players representing four teams who tossed washers for three days to get to the finals. There were another hundred or so spectators cheering them all on. 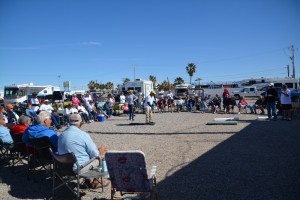 Holiboard is an officially organized international sport with no precisely determined origin. But there is an International Association of Washer Players out of Birmingham, Alabama with a set of fairly flexible rules, possibly to accommodate the plethora of regional versions of the game, which even goes by several different names based on its level of recreational enjoyment and regional popularity. Just some of those names include Washers, Washer, Washers Toss, Washoe’s, Texas Horseshoes, Hillbilly Horseshoes, Arizona Horseshoes, Polish Horseshoes, Holy Board, Holiboard and probably many more. The game is also played with different sized washers and target holes and throwing distances, probably also depending on the region where it is played.

However, after 29 consecutive years of holding a tournament, we feel safe in using the dimensions, rules and regulations of the Playa de Oro bunch since seniority has to play a part in this somewhere. In addition to the annual tournament, in which everyone is invited to participate, most weeks there are informal competitions in Playa de Oro also open to anyone. If you are into hand/eye coordination games, such as horseshoes, darts, sandbag pitching, etc., this should be a game you could enjoy.

The game is played by individuals or partners of two or four. Equipment consists of two 12” X 48” boards that sit on a 2” high frame. The board has three 4” holes routed in line down the middle 12” inches apart that accommodate 31/2” outside diameter washers that are tossed in 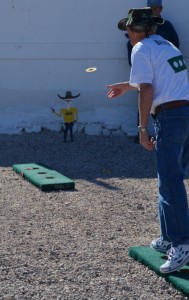 sets of three one at a time by the competitors. The competitor who is tossing stands upon one of the boards with toes not crossing over the front edge and tosses toward the holes on the other board 8’ away. Washers are tossed only underhanded with the washer parallel with the ground, but those are about the only rules restricting the toss. The nearest hole to the

competitor counts one, the middle hole counts three and the furthest hole counts 5 points. One of the most interesting aspects of Holiboard is that a player can nullify the score of his opponent by tossing a washer into the same hole on top of his opponent’s washer, thus defense and offense combine for some creative strategies. The game is played to a total score of 21 and that number must be reached exactly, otherwise the players get penalized with a subtraction of points equal to the number scored that brought the total over 21. (Details at 10 :)). 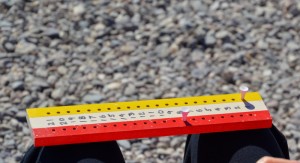 There are other rules but no deal breakers for enjoying this game of camaraderie, strategy, offense and defense, pretty much in that order. It’s a great spectator sport as well. We heard there were nearly a hundred watching the first day of eliminations in this year’s 29th Annual Holiboard Tournament at Playa de Oro. Many had driven in from the U.S. to either watch or play. Even during the finals of this double-elimination tourney on Thursday the 4th of February, there were over 60 spectators rooting their friends through the matches, and the crowd didn’t start dissipating 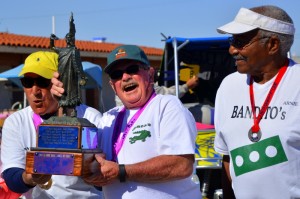 until after the last washer was tossed by David Ceballes, ½ of this year’s championship team of Ceballes and Tommy Calvert, both regulars at the medal presentations for decades. This crack team of tossers beat Bob Mellor and Dea Pleasants in a tight game that brought out every drop of strategy and skill from both teams before the winner was decided. In Third Place were Arnie Mott and Leonard Verner. The names of Arnie and Bob also appear on the large traveling trophy in several places. 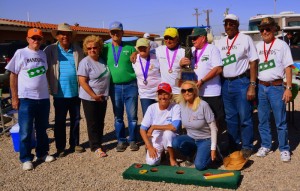 t roles during the tournament, like keeping the elimination brackets accurate, judging and scorekeeping, and of course the ecstatic 1st through 3rd place winners. The happy faces and laughter made up by far for the lack of attention toward the camera, though.

Even with the success of this, the 29th Holiboard Tournament, the exciteme

nt about next year was already building. “Everyone is really looking toward next year’s 30th Annual Tournament! We’re expecting a much larger number of teams and spectators than ever before. Some are
bringing their own cheerleaders. There will be team shirts, hats, so everybody can be a part of the fun,” said Linda Mottle, Playa de Oro resident and co-tournament director. If you want to get in on the fun, you can call or email Linda to get all the information you need, including your name on their email announcement list for upcoming practices and competitions. Linda’s mobile number is 623-570-5772 and her email is lindamottle@gmail.com.

Linda told us they want to let more folks in Puerto Peñasco know about Holiboard so they can practice and put a team together for next year—maybe even get a sponsor. Sounds like a plan for another really cool event in our little slice of paradise by the sea!