Since our blog on the Home Port, Part XV, last month, the weather has controlled fully one third of the construction time. High winds causing sizeable waves out towards the end of the jetty have prevented the heavy equipment from 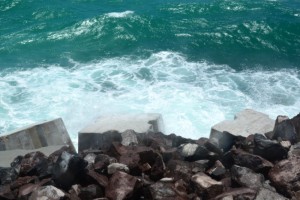 pouring the smaller rocks needed as a foundation for extending the jetty, 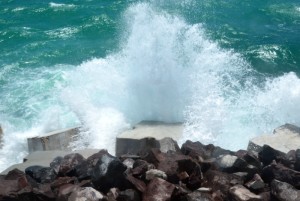 which in turn prevented the cranes from packing the rocks with first the weight of the one ton cubes and then the ten ton cubes.

The result of such huge waves and subsequent undercurrents have pulled the unprotected rocks away from the jetty which brings the need for a heavy front loader to literally build a path along the side of the jetty and shovel the rocks back to the sides before the concrete cubes can be placed to anchor them down.  The winds have been strong enough to prevent even the large cranes from lifting cubes into the wind without threat of a disaster. 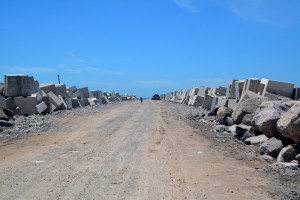 680 meters out from the shore, and happened to be during one of those windy days. Be assured that what you see 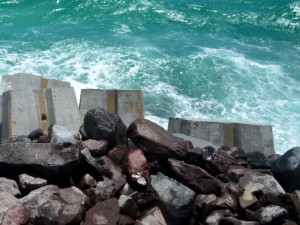 and feel from the shore is just a breeze compared to what is going on out there. As these photos indicate, the waves were large enough to bury the huge ten ton cubes when they crashed against the jetty. When you see these huge concrete cubes being jostled about by the force of the sea, it is easy to understand how rocks and even the one ton cubes can be pulled away from the jetty during those days.

Bottom line here is that a halt in pouring rock due to this kind of weather means much more than just continuing when the winds die down. It means having to retrieve all the rock that was pulled away 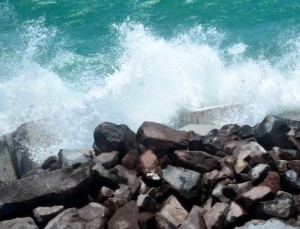 from the jetty and repack it back along the sides, then support it while the giant cranes carefully place the cubes on top to hold the rocks in place until they are settled. They had to halt the onsite concrete plant operation because of not being able to place the cubes due to weather. However, they were able to resume making cubes again this week. 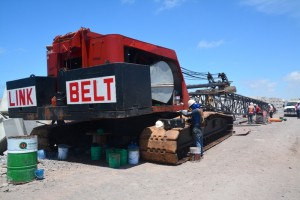 All was not lost during the adverse weather conditions. The crew took the time to perform heavy maintenance on the six giant cranes and position the front loaders to begin repacking rock when it is safe to do so.

When asked about the dock construction, Wendy said that the company 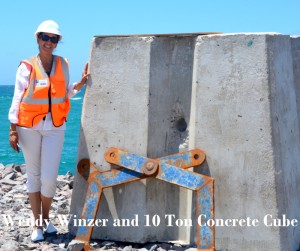 contracted to build the cruise ship dock onto the finished pier is already in the process of constructing the large pilots that will hold the dock in place.  Once the pier has reached a length to where the dock can be attached, the dock builders will use a crane on a floating barge to install the pilots in the sea floor.

As we returned to the offices, Wendy pointed out, “we will be placing 12 new buoy lights in addition to those on the jetty and they will alert vessels to where the jetty is going to be in addition to where it is now.  You should be seeing those blinking in the distance within the next few weeks, wind permitting of course.”