On the 30th of last September, two weeks after his installment as the new Mayor of Puerto Peñasco, Kiko Munro held a conference to which he had invited most of the community who packed the civic auditorium across from the Municipal government office on Blvd Benito Juarez. He called it “100 Days of Projects and Actions”, during which he outlined a list of projects designed to help im

prove the city in various areas from beautifying it to increasing safety to improving the quality and distribution of water. At or near the top of his list was to create and promote the reputation of Puerto Peñasco as a “safe haven” for tourism.

Good to his word, just last week, on the 26th of February, the Mayor officially announced activation of the Tourist Assistance Unit (in Spanish: Unidad Auxiliar Turistico) consisting of 16 men and four women, all bilingual and well trained in local history, culture, city layout, landmarks and points of interest, first aid, handling emergencies, as well as in self-defense and whose multiple objectives are to serve, guide, inform and protect visitors, both national and foreign as well as the residents of Puerto Peñasco. 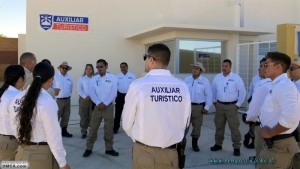 class resort destination. The carefully selected Tourist Assistance Unit is made up of naturally congenial service-oriented personnel who genuinely care about the welfare of all the people who live in and visit Puerto Peñasco. The Unit is headed up by Luis Molina, who, himself, comes from a hospitality background.

You will easily recognize agents of the Tourist Assistance Unit dressed in khaki pants, white

shirts and safari hats riding bicycles and quads around the tourist areas and making themselves available to serve the public with their knowledge and training to answer questions of all sorts, give directions and help with any problems that might arise during your visit to Puerto Peñasco. On the back of their shirts in clear lettering is “Auxiliar Turistico”.

At the same ceremony wherein Mayor Kiko Munro swore in and activated the 20 agents of the Tourist Assistance Unit (TAU), he also announced and introduced the five members of the newly appointed Tourist Assistance Advisory Committee headed up by Jim Ringquist, with members: Donna Whitman, Mark Olszewski, Manny Sánchez, and Enrique Gaxiola. The committee will serve as an intermediary between the public and government providing oversight and support for the TAU through Luis Molina and the mayor as well as being involved in a broad range of other tourist support and tourism promotion duties. 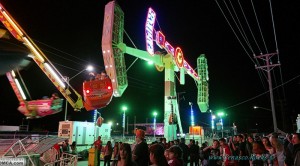 Just to clarify, the TAU is a reality, and immediately after their swearing in ceremony, the Unit dispersed to work with the local police force during the opening night of the Viva Peñasco Fiesta y Cultura 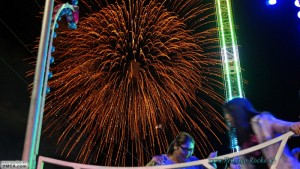 that took place for three days along Calle 12 and 13 over the weekend, on duty until around 3:00 AM each day. Other agents covered the tourist activities in the Malecon.

This new addition to the tourism service and protection capabilities of the city illustrates just how well Mayor Kiko Munro understands tourism and what makes visitors feel good about coming back as well as spreading the word to their family and friends about what a safe and fun destination Puerto Peñasco is. And this is just
one of the mayor’s implemented projects to support tourism to the city.

Mayor Munro also announced the launch of a new mobile app, currently in Spanish but which will soon be in English. The app allows tourists and residents to get information about the city and learn about events going on and scheduled to take place. It also has a unique “panic button” that will connect the user to a 911 emergency operator. 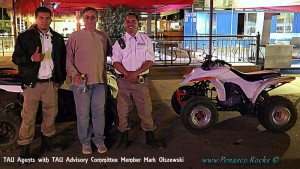 Drive curios area.  They plan to have additional base offices in the Malecon and beach areas. Office hours are from 7:00 AM to 8:00 PM and their land line phone number is 382 – 8413.

You may also reach the TAU advisory committee at touristassistancerockypoint@gmail.com.

For your information, the city also has a web site: www.puertopenasco.gob.mx.

In case you are not aware, for emergencies you may now dial 911 in Rocky Point just like in the U.S. or the old emergency number is still in existence at 066.

The bottom line here is that Puerto Peñasco is well on the road to preparing for the already growing tourism and the much-anticipated touristic growth expected for the next several years and to be boosted by the completion of the Puerto Peñasco home cruise port. Mayor Kiko Munro is keenly aware of how these new services and other services that he has planned for the near future can affect tourism growth.

Please record these addresses and phone numbers for future and frequent use.