By Jim Ringquist in Our Blog with 0 Comments 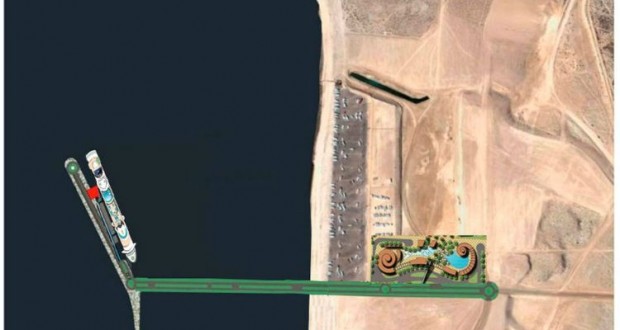 After a hiatus of a few months (to be fair, most of that time did have work going on behind the scenes), the Home Port project has picked up again. We all know that if you can’t see something, it can’t be real, right? So it is great to actually see some activity again to help raise the excitement levels.

Although the project has not been without challenges and setbacks, everyone involved assures us that it will be completed, if only a bit later than originally planned. The current projection is to have it ready for one cruise ship by the end of 2015. That is a pretty ambitious goal and, personally, I expect it to take a bit longer but here’s to hoping that it happens sooner than later and without further hitches.

If you are wondering what caused the delays in the first place, there were actually multiple issues. Some could possibly have been foreseen and some, not so much. There were union disputes, a misunderstanding with the contractor, political and environmental pressures, and probably most importantly, a problem with producing the correct size and integrity of rock from the quarry. Any project of this size is sure to have a few glitches and while the project may have appeared completely dormant, there was actually much activity going on behind the scenes working with engineers, geologists, conservationists, and the Government to form the new plan and obtain all of the necessary approvals. I have been assured that they are finally ready.

This is not the first ambitious project in Rocky Point to have had a few setbacks and delays. And, as I remember it, there was a ton of misinformation, some wild rumors, and loads of naysayers at those times as well. The projects that I am referring to are the Coastal Highway, the International Airport, and the Convention Center. Guess what? They have all been completed. Only time will tell if this endeavor will come to fruition or not but my money says that it will. I don’t know that there won’t be more problems or delays before it is finished, but the vast majority of people who are “in the know” are confident that it will be finished and that it will be a great asset to Puerto Penasco.

I was fortunate enough have had a meeting last week with a senior representative of SBR who is very familiar with the project and he kindly took the time to share some of the important aspects of the project as well as to explain some of the technical details and show me some of the plans and mock-up drawings of the finished venture. Here are a few of the highlights:

First of all, the word about using concrete blocks (cubes) is completely true. The large blocks (in place of the boulders) to line the outside of the base will be the most important use of the blocks, although small and medium sized blocks will also be used along with more of the small and medium sized rocks from the quarry (they have already started making more rocks).

Concrete is more expensive than rock blasted from a quarry and this type of concrete is about 50% more expensive than normal concrete because of the special properties needed to withstand long term exposure to salt water. The new plan was presented to and accepted by the Federal and State Governments and they have agreed to the additional funds needed for the change.

One way that they are compensating for the more expensive concrete is to extend the pier by an additional 100 meters in length. In order to achieve the needed depth, the original plan was to dredge around the last part of the pier. Since dredging is very expensive, it has been determined that extending the length will save money and compensate for some of the increased costs of using concrete instead of rock for the biggest barriers.

Building (pouring?) the concrete blocks will happen on a piece of the desert to the North of the Sonoran Sun Resort. If you look North from Sandy Beach Road towards the distant mountain, you can already see the site being prepared for a Cemex plant where they will be made. The forms are currently being built and the pieces are in place to start making them very soon. The estimate is that they will pour over 200,000 cubic meters of concrete to make enough blocks to finish the pier – about the same amount of concrete as used in the Dallas Cowboys Stadium.

Fun Fact: Each of the large blocks will weigh over 10 Tons (20,000 pounds or about 3 African Elephants)

Another exciting development is that the construction of the first terminal and the boarding dock will begin very soon as well. They will now have a 3 phase process going at the same time with the breakwater, the terminal, and the boarding dock happening together. The terminal will be North of the existing buildings so there will be no need to close Wrecked or Mare Blu during its construction. By the way, there has been some confusion about whether the current breakwater is the actual pier or if there would be a pier built next to the breakwater. The answer is that what you see is the pier. It will be totally stable and will be paved when it reaches the required length.

Fun Fact: The base at the end of the pier will be about 150 meters wide (that is over 1.5 football fields). It really is a pyramid with most of it underwater.

Hopefully, this will put some of the rumors to rest and get people excited again. I know that seeing is believing so keep your eyes open because I think that you will see some real progress as we move into the new year.