Genghis Khan and the Making of the Modern World – Excerpt by Delanceyplace.com

Delanceyplace.com is a neat little newsletter perfect for those who enjoy eclectic literary subjects but just don’t have time to read all the books covering those areas of history and science facts. Delancey Place sends out daily excerpts of such books that are easy and quick reads, and almost always contain interesting bits of information.  This recent excerpt about Genghis Khan enlightens us on the extreme impact the ruler had on shaping the modern world.

Today’s selection — from Genghis Khan and the Making of the Modern World Jack Weatherford. Whether measured by the total number of people defeated, the sum of the countries annexed, or by the total area occupied, Genghis Khan was the most successful conqueror in world history, and he redrew the boundaries of the world: 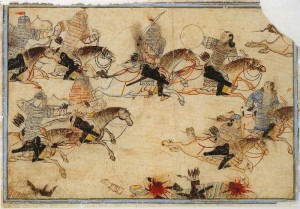 “Year by year, [Genghis Khan] gradually defeated everyone more powerful than he was, until he had conquered every tribe on the Mongolian steppe. At the age of fifty, when most great conquerors had already put their fighting days behind them, Genghis Khan [left] his remote homeland to confront the armies of the civilized people who had harassed and enslaved the nomadic tribes for centuries. In the remaining years of life, he [had] repeated victory across the Gobi and the Yellow River into the kingdoms of China, through the central Asian lands of the Turks and the Persians, and across the mountains of Afghanistan to the Indus River.

“In conquest after conquest, the Mongol army transformed warfare into an intercontinental affair fought on multiple fronts stretching across thousands of miles. Genghis Khan’s innovative fighting techniques made the heavily armored knights of medieval Europe obsolete, replacing them with disciplined cavalry moving in coordinated units. Rather than relying on defensive fortifications, he made brilliant use of speed and surprise on the battlefield, as well as perfecting siege warfare to such a degree that he ended the era of walled cities. Genghis Khan taught his people not only to fight across incredible distances but to sustain their campaign over years, decades, and, eventually, more than three generations of constant fighting.

“In twenty-five years, the Mongol army subjugated more lands and people than the Romans had conquered in four hundred years. Genghis Khan, together with his sons and grandsons, conquered the most densely populated civilizations of the thirteenth century. Whether measured by the total number of people defeated, the sum of the countries annexed, or by the total area occupied, Genghis Khan conquered more than twice as much as any other man in history. The hooves of the Mongol warriors’ horses splashed in the waters of every river and lake from the Pacific Ocean to the Mediterranean Sea. At its zenith, the empire covered between 11 and 12 million contiguous square miles, an area about the size of the African continent and considerably larger than North America, including the United States, Canada, Mexico, Central America, and the islands of the Caribbean combined. It stretched from the snowy tundra of Siberia to the hot plains of India, from the rice paddies of Vietnam to the wheat fields of Hungary, and from Korea to the Balkans. The majority of people today live in countries conquered by the Mongols; on the modern map, Genghis Khan’s conquests include thirty countries with well over 3 billion people. The most astonishing aspect of this achievement is that the entire Mongol tribe under him numbered around a million, smaller than the workforce of some modern corporations. From this million, he recruited his army, which was comprised of no more than one hundred thousand warriors — a group that could comfortably fit into the larger sports stadiums of the modern era.

“In American terms, the accomplishment of Genghis Khan might be understood if the United States, instead of being created by a group of educated merchants or wealthy planters, had been founded by one of its illiterate slaves, who, by the sheer force of personality, charisma, and determination, liberated America from foreign rule, united the people, created an alphabet, wrote the constitution, established universal religious freedom, invented a new system of warfare, marched an army from Canada to Brazil, and opened roads of commerce in a free-trade zone that stretched across the continents. On every level and from any perspective, the scale and scope of Genghis Khan’s accomplishments challenge the limits of imagination and tax the resources of scholarly explanation.

“As Genghis Khan’s cavalry charged across the thirteenth century, he redrew the boundaries of the world. His architecture was not in stone but in nations. Unsatisfied with the vast number of little kingdoms, Genghis Khan consolidated smaller countries into larger ones. In eastern Europe, the Mongols united a dozen Slavic principalities and cities into one large Russian state. In eastern Asia, over a span of three generations, they created the country of China by weaving together the remnants of the Sung dynasty in the south with the lands of the Jurched in Manchuria, Tibet in the west, the Tangut Kingdom adjacent to the Gobi, and the Uighur lands of eastern Turkistan. As the Mongols expanded their rule, they created countries such as Korea and India that have survived to modern times in approximately the same borders fashioned by their Mongol conquerors.

“Genghis Khan’s empire connected and amalgamated the many civilizations around him into a new world order. At the time of his birth in 1162, the Old World consisted of a series of regional civilizations each of which could claim virtually no knowledge of any civilization beyond its closest neighbor. No one in China had heard of Europe, and no one in Europe had heard of China, and, so far as is known, no person had made the journey from one to the other. By the time of his death in 1227, he had connected them with diplomatic and commercial contacts that still remain unbroken.

“As he smashed the feudal system of aristocratic privilege and birth, he built a new and unique system based on individual merit, loyalty, and achievement. He took the disjointed and languorous trading towns along the Silk Route and organized them into history’s largest free-trade zone. He lowered taxes for everyone, and abolished them altogether for doctors, teachers, priests, and educational institutions. He established a regular census and created the first international postal system. His was not an empire that hoarded wealth and treasure; instead, he widely distributed the goods acquired in combat so that they could make their way back into commercial circulation. He created an international law and recognized the ultimate supreme law of the Eternal Blue Sky over all people. At a time when most rulers considered themselves to be above the law, Genghis Khan insisted on laws holding rulers as equally accountable as the lowest herder. He granted religious freedom within his realms, though he demanded total loyalty from conquered subjects of all religions. He insisted on the rule of law and abolished torture, but he mounted major campaigns to seek out and kill raiding bandits and terrorist assassins. He refused to hold hostages and, instead, instituted the novel practice of granting diplomatic immunity for all ambassadors and envoys, including those from hostile nations with whom he was at war.”